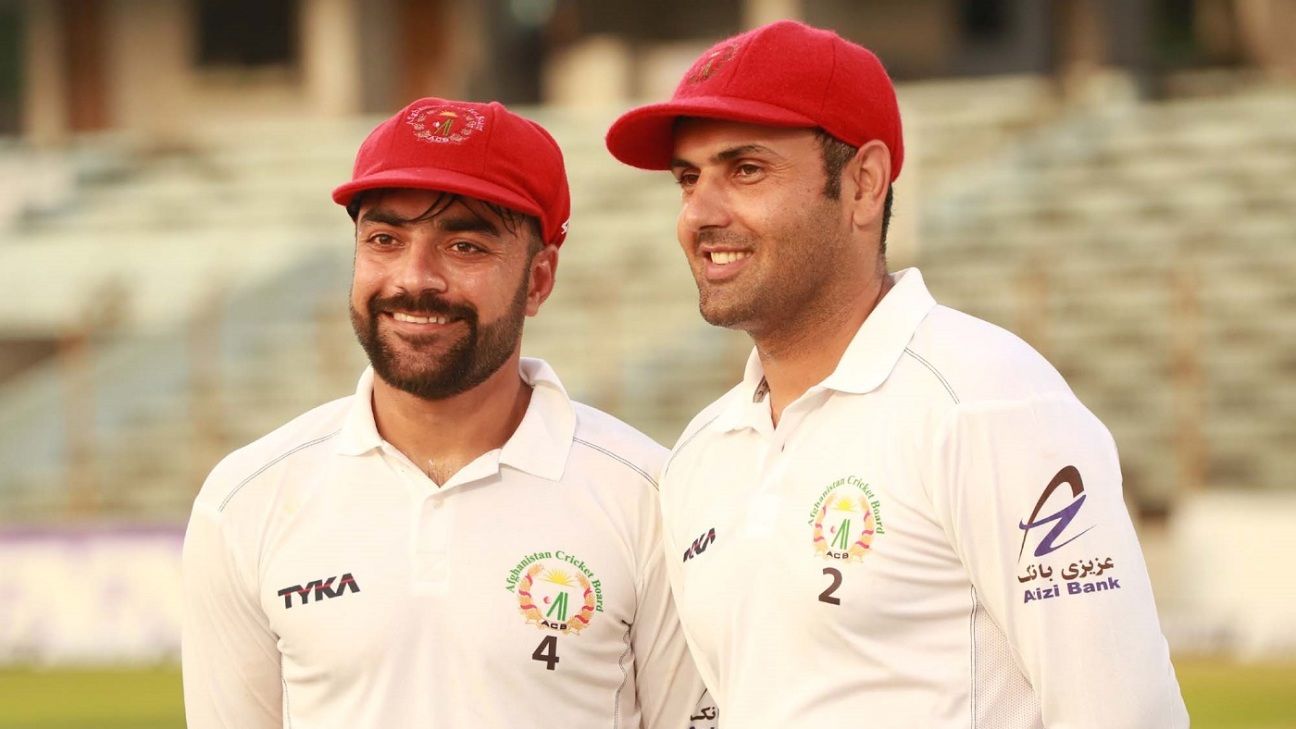 Rashid Khan, not yet 21 and in his first Test as captain, spun Afghanistan to a memorable win, by 224 runs in Chattogram, and picked up the Man-of-the-Match award too, for his 11 wickets and half-century in the first innings. It was a time to celebrate, but also bid farewell to Mohammad Nabi from Test cricket, a job Rashid did in style by dedicating his match award to “the legend”.

“He has totally helped me a lot and other spinners a lot as well, since I’ve been in the side, and still he is with us in the ODIs and T20s, but in the longer format that experience was always great,” Rashid said. “I wish him all the best and thanks for all your service for the country. I want to dedicate this Man of the Match to Nabi.”

While Nabi played his part with the ball in the Test, the performance from seniors and newcomers alike was heartening for Afghanistan, who have now won two of their three Test matches since becoming a Test-playing country. Asghar Afghan, the former captain, hit twin half-centuries, while Ibrahim Zadran, on debut, scored 21 and 87, and Qais Ahmed and Zahir Khan, both debutant spinners, held their own.

“Thanks to the almighty Allah for this performance, under my captaincy we won this game against a big side like Bangladesh. We are new in this format, so the credit goes to the coaching staff [and] the players the way they prepared for this game,” Rashid gushed. “Before coming here, we had a camp in Abu Dhabi, that was one of the hottest games I have ever had. After playing in 46-47 [degrees], when you come in this weather, it is very easy for you.

“The plan which was given to the players, each and every one – batting, bowling, fielding – everyone just tried and applied himself. The only thing from my side was to keep going out, keep enjoying yourself, enjoy your batting, enjoy your bowling. Much credit goes to everyone in the batting, and the bowlers, the way we did the job. Especially the youngsters Qais and Zahir, and Yamin [Ahmadzai, the quick bowler], the way he bowled in the first innings. So it was a great team effort and we are really pleased with that.”

Rashid credited the Afghanistan Cricket Board for putting in place a four-day system at home, which, he said, has helped the youngsters deal with the demands of the longest format well.

“The youngsters who are coming, they are applying themselves really quickly. They are learning from their mistakes. Especially now, we have a good four-day structure back home, we play ten to 12 four-day matches. That is helping the youngsters get used to the longer format and not just the T20s or ODIs,” he said. “Everyone was focusing on his job and trying to give 100%. We are really famous with the shorter format but the challenge was for us, especially with the batsmen, to stay on the wicket and spend as much time as possible. They have done a terrific job.”

While Rashid was celebrating, Shakib Al Hasan, the Bangladesh Test and T20I captain, wore a desolate look, after overseeing a below-par performance. They were behind the eight-ball for the longest part but, thanks to the weather, had a good shot at saving the Test on the last day, with four wickets in hand and a minimum of 18.3 overs to bat out, light permitting. They lasted just 15.1.

“I think it’s a combination of both – application of our batsmen, and at the same time I think Afghanistan bowled really well, so the credit goes to them for the way they played throughout this Test match,” Shakib said, trying to explain the result. “So we need to do a lot of hard work to become a very good, consistent team. But credit goes to Afghanistan for the way they kept us under pressure and under their nose.”

Asked if the build-up was wrong, or that Bangladesh’s lack of Test matches in recent times was a factor, Shakib disagreed: “Well, after playing for 20 years, we can’t say it’s a build-up or something like that. It might be [that] these guys are not playing Test match for a while. It has been a while since we played our last Test match (in March in New Zealand), so that might be the reason.

“[But we should] just forget this match as soon as possible and we need to look forward to the T20 series, because Afghanistan is a very good T20 side, and we have to play our best cricket if we want to do well in that tournament. [The T20] World Cup [is] coming up next year and we need to focus on our T20 at this moment.”