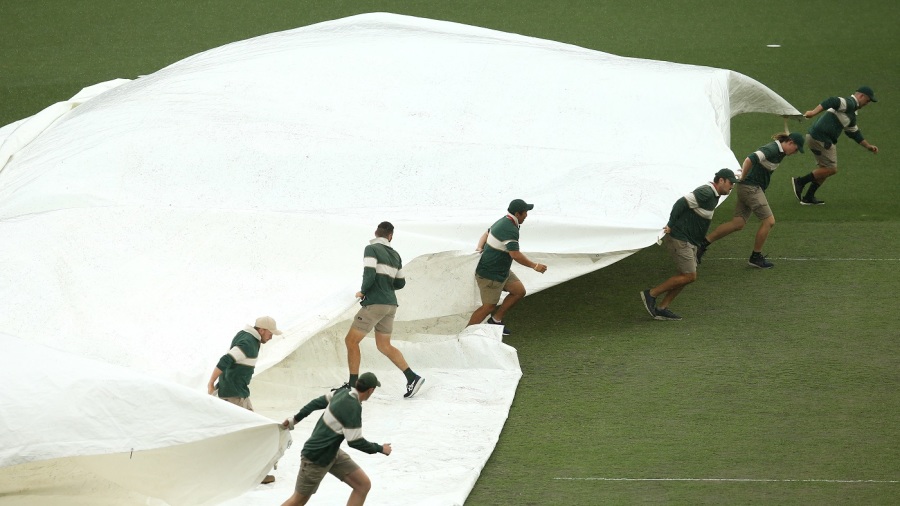 Australia’s winning run in T20Is was halted by the Sydney weather when they were on track to take the opening match against Pakistan which had already been truncated by rain.

Chasing a revised 119 in 15 overs, after Pakistan’s innings was interrupted after 12.4 overs, Aaron Finch laid into Mohammad Irfan’s second over which cost 26 runs – including two sixes and a no-ball that went for four – and put them well ahead in the chase, with the wicketless par score after five overs being 33.

However, with 11 balls still needed to reach the five-over mark and constitute a match the rain returned. At the other end to Finch, David Warner didn’t need to do much more than watch as he finished on 2 off 4 deliveries which extended his run of being unbeaten in T20Is.

The bright spot for Pakistan was new captain Babar Azam – the No. 1-ranked T20I batsman – who was head and shoulders above his team-mates with 59 off 38 balls but he was the only visiting batsman to find some fluency.

After Finch opted to bowl, Mitchell Starc handed Australia an excellent start as he had Fakhar Zaman caught at point with his second delivery and when Haris Sohail played a poor stroke, carving high into the air on the off side, Pakistan were 2 for 10 in the second over.

Babar and Mohammad Rizwan rebuilt and after the Powerplay Pakistan were a touch more sturdy on 2 for 38 without having put Australia under pressure other than when Rizwan skipped down the pitch at Adam Zampa, who was introduced in the fourth over, and sent him for four and six in consecutive deliveries.

However, that was about the best of Rizwan’s innings as he struggled to move through the gears, and was troubled by the pace of Pat Cummins, failing to score a run-a-ball against anyone other than Zampa before picking out long-on against Ashton Agar.

When the rain arrived Pakistan were 3 for 88 off 12.4 overs and on resumption managed 19 runs off the remaining 14 deliveries with Kane Richardson conceding just seven from an excellent 14th over that included the wicket of Asif Ali and an edged four from Babar that took him to his fifty.

Babar will need greater support from his team-mates when the series moves to Canberra for the second match on Tuesday.