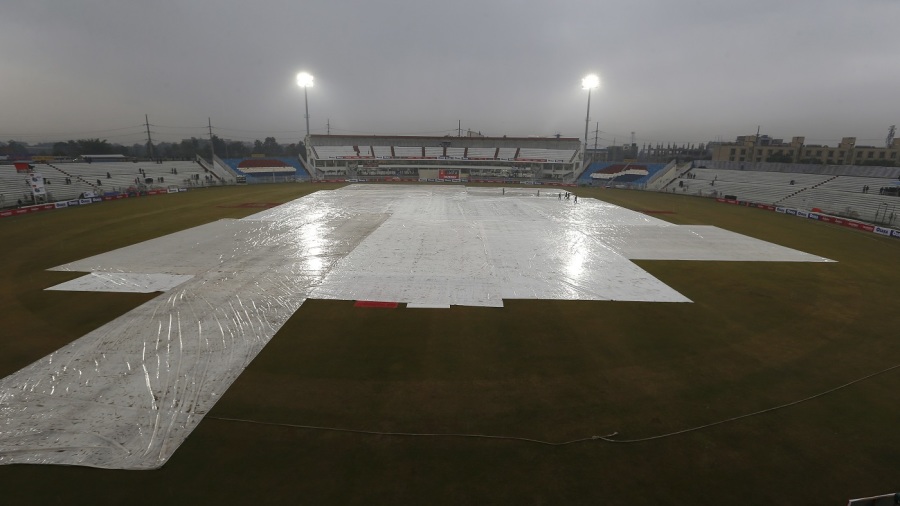 Only 18.2 overs were possible on a dark, wet day two at Rawalpindi. During the 82 minutes of play – split across the morning and afternoon sessions – Dhanajaya de Silva moved to 72 not out, Sri Lanka added 61 to their day one score and lost just the wicket of Niroshan Dickwella.

Although the sun was not seen through the course of the day, play was able to begin at 9:45 am with the aid of floodlights, which even at that time were casting shadows. Perhaps partly due to the dim conditions, Sri Lanka’s overnight pair of de Silva and Dickwella made tetchy starts to day two, finding themselves frequently beaten by Pakistan’s quicks, while also mistiming their shots on the occasions they did make contact.

Nevertheless, de Silva in particular succeeded in keeping his account ticking over. His first boundary of the day came from a languid push through the covers off Naseem Shah’s first delivery of the day. He would pick up regular singles on the leg side through the remainder of the first session’s play as well. He thought he had been dismissed on 48 when he poked at a Naseem away-seamer and sent an edge through to the keeper, but although Pakistan celebrated that wicket, replays suggested the catch had not quite carried to wicketkeeper Mohammad Rizwan. De Silva was waiting for final confirmation of his dismissal at the boundary when, to his surprise, he was called back to the crease by the umpires.

Drizzle forced an interruption of almost three-and-a-half hours after only 40 minutes of actual play, and when the second new ball became available four overs after resumption, Pakistan had their best spell of play in the day. Naseem was intense through this period, repeatedly beating both batsmen, while drawing thick inside edges that missed the stumps. It was Shaheen Afridi who made the breakthrough from the other end, however, having Dickwella caught sharply at gully by Babar Azam for 33 to end a 67-run stand. Pakistan burned a review later that same over when Afridi thought he had Dilruwan Perera trapped in front, only for the ball to have been shown to have pitched outside leg stump.

Only 12 further deliveries were possible after Dickwella’s dismissal, before the umpires took the teams off for bad light, and a round of drizzle subsequently wiped out the remote chance of resumption.