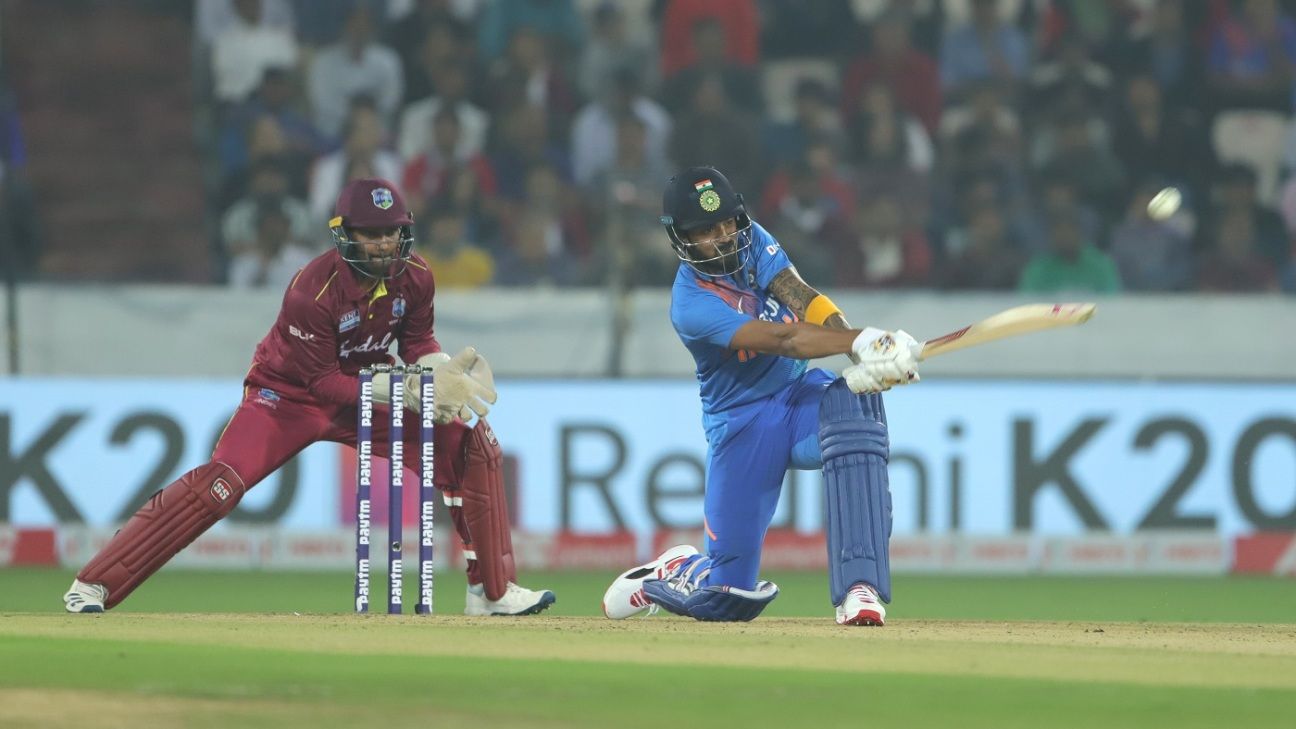 Speaking to Chahal TV for the BCCI website, this was how KL Rahul summed up his approach and mindset after getting to a start in India’s pursuit of 208 against West Indies in the T20I series opener in Hyderabad. In stark contrast to his captain Virat Kohli’s early struggles at the other end, Rahul seamlessly built on his start and converted it into a 40-ball 62. It was Rahul’s innings that set the scene for the angry Kohli masterclass in the latter half of the chase.

When Rahul had broken into first-class cricket in 2010, he was a proper top-order batsman whose game was founded on the old-school virtues: leaving anything that’s wide of off stump and playing the balls that threaten the stumps with a dead-straight bat.

Rahul, however, unlocked the white-ball monster in him during IPL 2018, when he racked up 659 runs in 14 matches at a strike rate of 158.41. He followed it up with 593 runs in 14 matches in 2019, having expanded his range with a variety of sweeps, scoops and big hits. Some of that funkiness has perhaps seeped into his red-ball game and as a result he has been jettisoned from the Test squad.

His white-ball form, though, is reaching a stage where it might be just too hard to ignore. Rahul might not have even started the series had Shikhar Dhawan been fit. This, despite being at the forefront of Karnataka’s 20-overs Syed Mushtaq Ali title defence. Rahul had tallied 313 runs in eight innings at an average of 52.16 and strike rate of 155.72, including some tough runs on spin-friendly tracks in Surat.

On the eve of the T20I series against West Indies, Kohli was even asked if the management might consider bumping Rishabh Pant to the top, but the India captain shot that thought down quickly and indicated that Rahul will slot in alongside Rohit Sharma.

Rohit picked out deep midwicket for 8 off 10 balls in India’s steep chase in Hyderabad and Kohli just couldn’t find his bearings early on at the other end. West Indies’ bowlers, particularly Sheldon Cottrell, varied their pace and lengths smartly to make life more difficult for India.

After Cottrell had softened Rohit with a length ball that burst off the track and pinged his right glove, left-arm fingerspinner Khary Pierre made the incision for West Indies. However, Rahul continued to pick off runs in risk-free fashion.

Having all the shots is one thing and knowing when to use them is another. When Cottrell or Holder found some extra bounce and aimed for the fourth stump, Rahul simply rode it and tapped it behind point, down towards third man.

Only when the ball was well short and wide of off did Rahul unleash the full-blooded cut. Hayden Walsh Jr. was the best fielder of CPL 2019, his athletic interventions at backward point turned games as much as his wristspin did for eventual champions Barbados Tridents. Just ask West Indies and Trinbago Knight Riders captain Kieron Pollard. It was a moment of brilliance in the field from Walsh Jr. that ran out Pollard in the second qualifier and KO’d Knight Riders.

On Friday night, Rahul cracked a brace of square-cuts, beating a sprawling Walsh Jr. – both to his left and right for fours. Then, after bedding in, in the last over of the Powerplay, Rahul brought out his attacking enterprise. He backed away to left-arm fingerspinner Pierre and slog-swept him over square leg for six. See ball, hit ball.

In the next over, Rahul used the extra pace of Walsh Jr. to his advantage and dabbed him fine of short third man for four. He also rotated the strike without much fuss and raised his fifty off 37 balls. During the process, Rahul passed 1000 T20I runs in his 29th innings.

Just when Rahul was about to hit full tilt, having sent Kesrick Williams and Pierre for sixes over midwicket, he holed out to long-off while attempting a third six. By then, Kohli had found his touch and India eventually sailed to victory.

“[It’s] important to lay a solid foundation as an opener because there are power hitters in the back end,” Rahul told Star Sports after the match. “Playing Syed Mushtaq Ali Trophy helped a lot. Doesn’t matter how many hours you spend in the nets. Winning games gives me the most confidence. Did that with Karnataka, happy to do it with India. Good that I can carry my confidence across tournaments.”

Rahul has two more T20Is in this series to extend his rich white-ball form and give the Indian management another happy headache in the lead-up to the T20 World Cup in Australia – the scene of his Test debut – next year.

“It’s a long way [away], honestly,” Rahul said of the T20 World Cup, at the post-match press conference. “I’ve got the opportunity to bat at the top of the order again after a couple of series. So [I’m] looking forward to just making the best use of it. Today was a good outing, a good hit in the middle, and hopefully I just continue the same thing and not worry about October next year, there are a lot of games before that.”