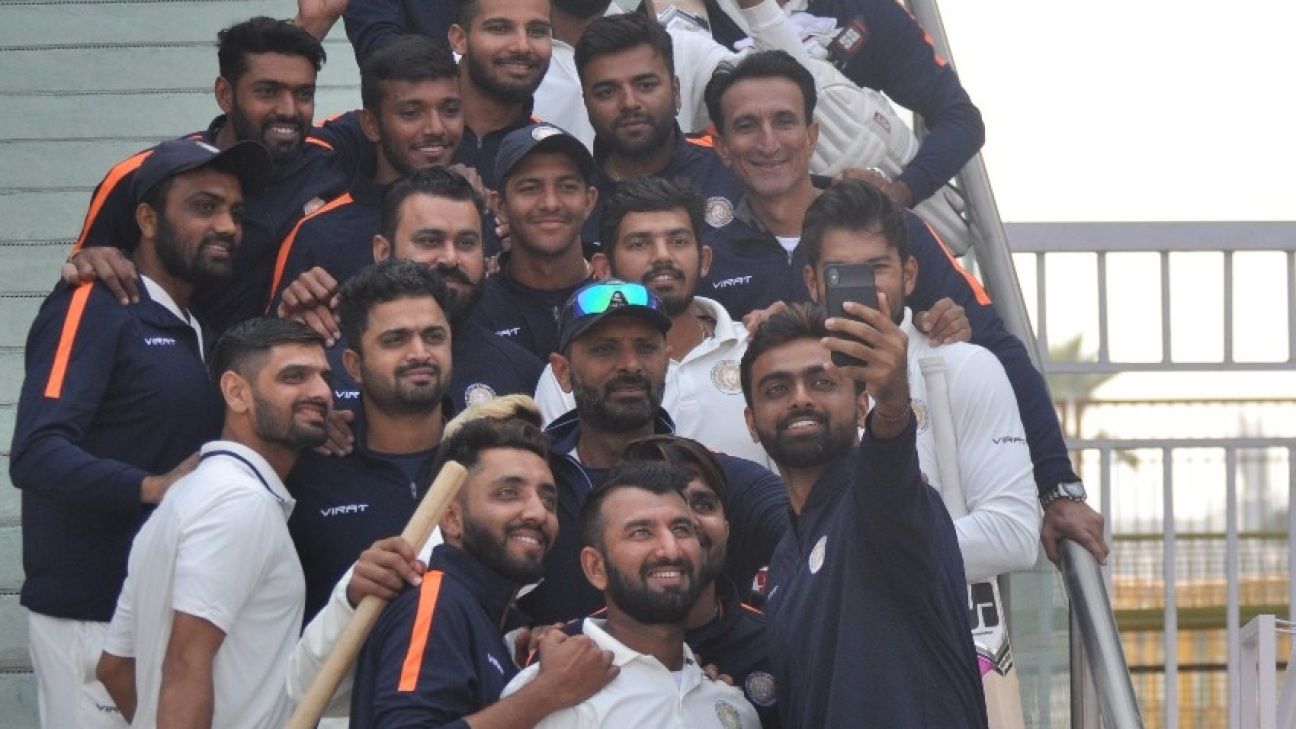 Before Saturday, Saurashtra had never won a match against Uttar Pradesh in the Ranji Trophy. They had played seven, losing three and conceding the first-innings lead thrice.

That record didn’t look likely to change when Saurashtra ended their first innings against the same opponents in the Ranji Trophy 2018-19 quarter-final 177 runs in arrears. But this time, they made history, not only winning their first match against UP, but also registering the highest successful chase in Ranji history.

Saurashtra had bowled UP out for 194 in the second innings, but that still left them a target of 372. But the top order came good as they bettered the previous highest successful chase, Assam’s 371 against Services in 2008-09.

Saurashtra captain Jaydev Unadkat hailed the landmark victory. “I think this is one of the biggest victories in the history of Saurashtra,” Unadkat said after the match. “The way we fought back in the game made it more special. So probably one of the best, if not the best, victory for Saurashtra. I have been told it’s the highest run-chase in the Ranji Trophy. So nothing can be more special than this.”

Two factors helped Saurashtra pull off the win. The fact that this was a five-day game, as opposed to the four-day games in the league stages, and that Saurashtra had Cheteshwar Pujara in their ranks.

“No one was thinking that we were out of the game,” Unadkat said. “The thing that we talked about before the game was that it’s a five-day game, and not the usual four-day game we play in the Ranji Trophy. The talk in the team was it will be a two-innings game. Although we didn’t do well in the first innings, even if we had, we still would have been on our toes.

“The great plus was that we had Cheteshwar as well. Actually, he was the one who took the initiative in between the innings and told us, ‘guys, it’s a five-day game and we can come back in this game’. And we all believed it.

“We wanted our batting to revolve around him. If he bats at No. 4, there can be two guys around him who can bat with him and then he can carry the innings forward. If the side is already 150 for 2 and Cheteshwar is still to come, things would be very different for the opposition.”

“There was one point in the game where we thought it was now-or-never when they [UP] were 107 for 1 [in their second innings]. I think it was drinks in between and then we told ourselves one good hour and we can turn around the game. [Dharmendrasinh] Jadeja has been our trump card so far, bowling well on all kinds of wickets. I was relying on him to give me that breakthrough and two set batsmen got out quickly and that brought us back in the game. And then we never left our grip from it.”

For Pujara, this was the first game after a successful Australia tour during which he scored 521 runs in four Tests at an average of over 74, and was man of the series in India’s first-ever Test series win in Australia. While Pujara normally bats at No. 3, here he batted at No. 4 in the first innings, while in the second, the presence of Kamlesh Makvana as nightwatchman meant he came in at No.5. The man occupying the No.3 slot for Sausrashtra was the 20-year-old Vishvaraj Jadeja, who has made his debut this season.

“The whole thing about that was we wanted our batting to revolve around him [Pujara],” Unadkat said. “Like if he bats at No. 4, then there can be two guys around him who can bat with him and then he can carry the innings forward. If the side is already 150 for 2 and Cheteshwar is still to come, things would be very different for the opposition. That was the whole idea and I think that turned out pretty good in the second innings.”

Unadkat was also full of praise for youngsters Harvik Desai and Chetan Sakariya; both also playing their first season. Desai scored 84 and 116 in the game and was declared man of the match, while left-arm pacer Sakariya’s three-wicket burst in the second innings reduced UP from 162 for 4 to 166 for 7.

“I think he [Desai] has been waiting for his century like no one else. He had got six fifties but didn’t get a hundred. So he was a bit nervous about being 83 not out at stumps [on Day 4]. Also, I haven’t seen a better slip catcher for Saurashtra than him. He has taken 15-16 catches without dropping even one. He is still very young, he is still learning but I think he has a bright career ahead of him.

“We got a couple of fast bowlers injured before the start of the season itself. So we needed someone to turn up and do well. Even I got injured in between. Then Chetan took up that position and he really turned up like anything. He is one bowler who can be good in all three formats. I am really looking forward to keep bowling with him, and we can prove to be a really great bowling force for Saurashtra.”