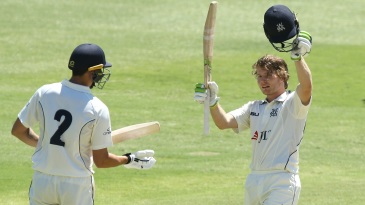 Emerging batsman Will Pucovski posted his third Sheffield Shield century as Victoria set Tasmania 476 runs to win in the fourth innings at the Junction Oval.

Pucovski, who has endured an up-and-down summer both on and off the field, made 131 not out from 160 balls to grind Tasmania down after the visitors were bowled out for 286 on the third morning, leaving a first-innings deficit of 168.

Pucovski struck 16 boundaries and shared century stands with Nic Maddinson and Cameron White, who both made half-centuries.

Victoria captain Travis Dean’s struggles, meanwhile, continued as he was trapped lbw by Riley Meredith for just 11. Marcus Harris cruised past 900 runs for the season but he threw away another chance to post a big score: he was out for 44, edging an attempted cut shot to first slip off Gabe Bell.

Pucovski and Maddinson put on 129 for the third wicket. Maddinson made 61, to follow on from his century in the first innings, before he was caught and bowled by 18-year-old offspinner Jarrod Freeman. Pucovski kept going to reach his second century of the season with a flick off the hip, and his first since the mental health-related break he took earlier in the season.

Pucovski and Cameron White added 100 runs in the unbeaten fourth-wicket stand. White made 52 not out from 55 balls feasting on some average bowling from the Tigers. Matthew Wade abandoned the gloves after tea and bowled six overs of all sorts which conceded 33 runs. Victoria declared at 3 for 307, setting the Tigers 476 to win. Openers Alex Doolan and Jordan Silk negotiated a tricky 11-over period before stumps, reaching 27 without loss.

Earlier in the day, Scott Boland took his fourth wicket of the innings but not before Tasmania’s last three batsmen were able to add 52 to the overnight score of 8 for 234. Sam Rainbird and Bell took their ninth-wicket partnership to 67 with Rainbird reaching his second career half-century and posting highest first-class score of 59. Boland broke the stand with a sharp short ball that Bell could only parry to White at second slip. Rainbird chipped a catch to mid-on in the next over from Chris Tremain to end the innings.