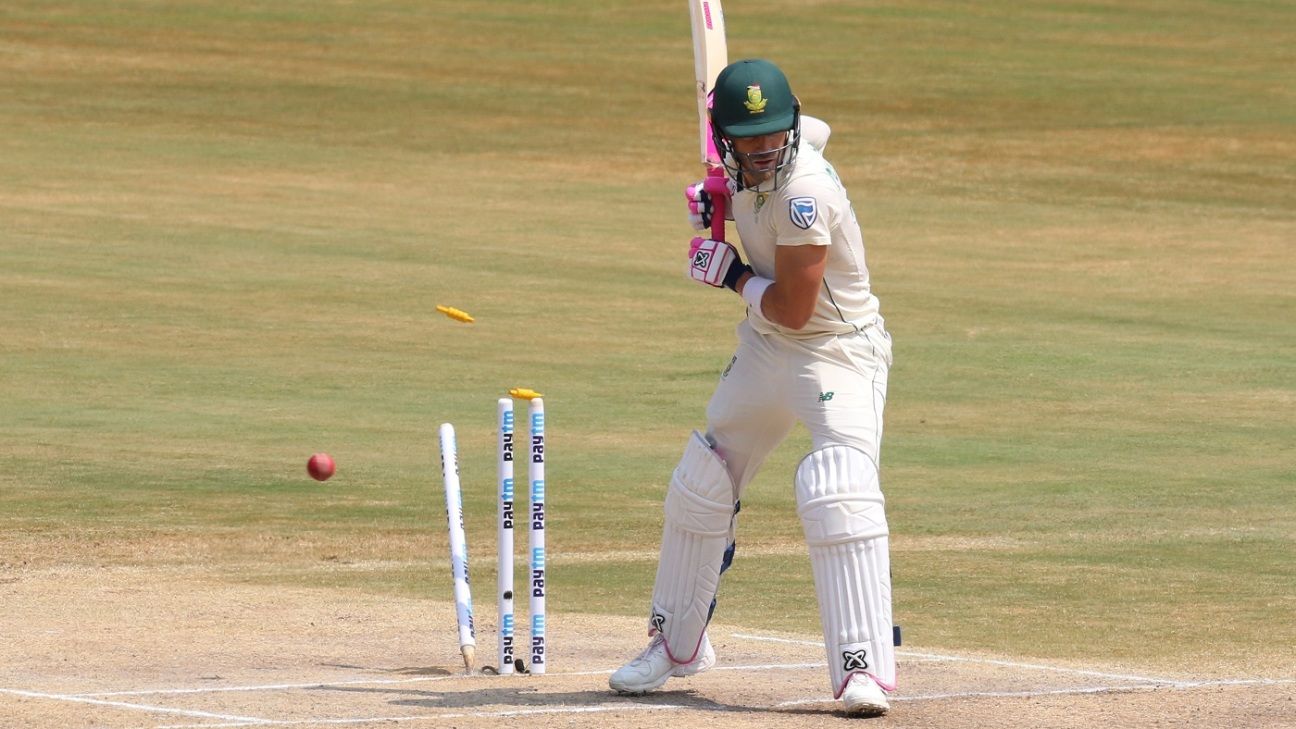 For a team that has lost a Test by a margin of more than 200 runs, South Africa seem unusually pleased with their performance against India in Vizag. Compare it to the way they played four years ago here, or even 15 months ago in Sri Lanka, and you will understand why.

Before Vizag, South Africa had lost four of their last five Tests in India, including a 3-0 defeat in 2015. Two of those three losses in that series came inside three days, with only the Delhi Test going the distance. South Africa’s batting line-up was befuddled by the conditions and opposition spinners as they looked a shadow of the outfit that won in Sri Lanka in 2014 and drew in India in 2010.

After Vizag, South Africa have lost six of their last seven Tests in the subcontinent but they went down fighting. They scored over 400 in the first innings, taking the match well into the fifth day. Two of their batsmen scored centuries and even though they teetered on 70 for 8 in the second innings, they did not crash and burn until the penultimate session of the match. The overall assessment was to take “a lot of confidence” from their efforts and to pat themselves on the back for showing they had learnt lessons and improved from previous trips.

“I’m really proud of the first innings, the way that we batted. That was a real line in the sand for us as a team,” Faf du Plessis said. “We’ve got a lot of confidence in our dressing room because of what happened in the first innings. Dean scored a great 160 and Quinny as well – a great combination of attack and defence. Certainly from the last time we were here, it was tough but we grew as a batting unit and the experience that we got from that tour. I am hoping that the lessons we learnt there will show us we can score runs and compete.”

While there is still ample to work to be done among the less experienced players, such as Aiden Markram and Thenis de Bruyn, and questions continue to lurk over when Temba Bavuma will add to his lone Test century, runs are not the only thing South Africa need to challenge their hosts. They were unable to bowl India out in either innings and the composition and quality of their attack will come under scrutiny ahead of the next Test.

South Africa made the bold call of using all three frontline spinners in their squad, though two of them – Dane Piedt and debutant Senuran Muthusamy – appeared to be more useful as batsmen. They chose their senior seamers Vernon Philander and Kagiso Rabada but Philander’s lack of pace reduced him to a containing role and Rabada was unable to make anything happen even when variable bounce came into play. While hindsight may have called on Lungi Ngidi or Anrich Nortje for extra pace, du Plessis is unsure they would have made a difference.

“It was difficult to try and slow the game down. We were bowling a lot of spin so the pace of play was really fast. And when you’ve got momentum, which they had at that stage, it just felt like it was really difficult to stop. From a combination point of view, it’s difficult to say.

“Apart from today, seamers didn’t play that much of a role in this Test match. They played a holding role in the first four days. Whether an extra seamer would have made a difference, I am not sure. But definitely day five, we saw that there was huge value in the seam, the up and down, but it is something for us to consider moving into the next Test match.”

Du Plessis expects surfaces to turn more in Pune and Ranchi which will leave South Africa with the same conundrum. He has faith his premier slower bowler, Keshav Maharaj, is due something special as the series goes on.

“On wickets that offer a little bit more spin he is just as good as any of the spinners in the Indian team.”

Du Plessis was also impressed by Muthusamy’s resolve in scoring an unbeaten 33 and 49 in the match.

“You can see technically he is very sound against spin which is something he has worked really hard on. Obviously he bowls a bit as well so that helps. Batting in that No.7 or No.8 position is always something we are looking for as a team. He batted with real maturity in both innings and is making it hard for us to leave him out of the second Test. He is putting the numbers on the scoreboard which is what we want.”

All that suggests that Piedt may be the man to miss out as South Africa look to pick a player who can bolster their ability to take wickets without compromising the length of the line-up.

Neither Ngidi nor Nortje fits that role exactly, which will place extra responsibility on Philander, Muthusamy and Maharaj with the bat, but that is the price South Africa have to pay for not having a steady supply of seam-bowling allrounders anymore.

“If we leave out an allrounder then our batting becomes weaker, If we play an extra batter when we don’t have enough bowling resources. Someone like Keshav can bowl a lot of overs so he can block up an end the whole day, similar to what Ashwin does with India,” du Plessis explained.

“It’s about finding the balance, which is our best wicket-taking options. But also, you definitely need to have one element of control in the subcontinent. You can’t just have guys running and bowl in fast but not hitting the stumps consistently. Those are the conversation that we will have.”

Before South Africa look that far ahead, du Plessis wants the team to concentrate on something entirely different: heads pace. Rather than obsess over technique or team-combination, he wants his men to take the positives from their first innings and put a poor day five at Vizag behind them as they attempt to win a Test on the subcontinent for the first time in five years.

“That will be a big thing for us a team – that we focus on our strong our heads can be. There’s not much that you can do in the nets over the next two days to be strong in that next Test match. It’s about mentally how we are able to put away the last day that we didn’t play well and make sure we are ready to come back for the next, hungry to put in a big performance.