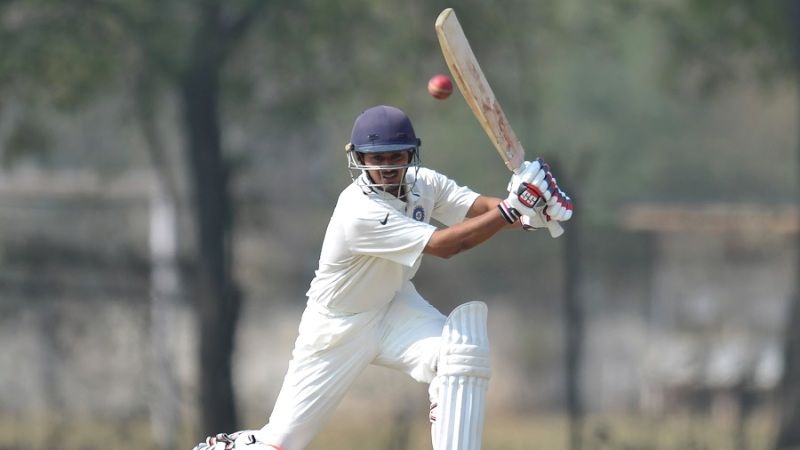 Priyank Panchal‘s fluent double-century and his 196-run stand with centurion KS Bharat tamed England Lions’ bowling attack on the third day of the first unofficial Test in Wayanad, as the hosts declared on 540 for 6. While Panchal’s overnight partner KL Rahul fell short of a century by 11 runs earlier in the day, Panchal went on to score his third first-class double-century, going past 1000 first-class this season on the way, making the visiting bowlers toil on a pitch that flattened out through the course of the day.

Coming into the match with scores of 8 and 3 he made during the Ranji Trophy quarter-finals at the same ground, Panchal, resuming on his overnight score of 89, started off cautiously against the Lions fast bowlers who pulled their lengths back in a bid to extract some movement off the pitch.

Rahul added only one run to his overnight score of 88 and walked back just six minutes into the day’s play, falling to a sharp catch by substitute fielder Jamie Overton at backward point. Two quick wickets followed, and that was the only period Lions dominated in the day.

With the pitch easing up and the ball coming on to the bat, the conditions were ideal for the hosts to post a big first-innings lead. Panchal soon brought up his century, and once Bharat joined him at the crease, it was India A that dominated throughout. The duo soldiered for nearly six hours. Panchal, without breaking a sweat throughout, scored slowly through the first few overs of the day and then sped through after his century, largely targeting the areas behind square to score his big runs.

Bharat started off in brisk fashion, showing his ability to flick, pull and hook deliveries pitched a little short on his way to a stroke-filled 142 off 139 balls, which was dotted with 11 hits to the fence. He brought up his century with an upper cut that landed straight into the point boundary soon after tea. In the very next over, Panchal stepped out of his crease while on 199 to launch left-arm spinner Daniel Briggs to long-on, as he burst into celebration amid applause from the crowd.

The vital breakthrough for Lions was not far away, as a widish delivery from fast bowler Zak Chappell made Panchal edge to the wicketkeeper. They had to wait for 10 more overs to remove Bharat. Jalaj Saxena and Shardul Thakur then batted for two more overs before India declared with a 200-run lead.

Only five more overs were bowled as rain halted Lions’ reply, cutting the day’s play short by nearly an hour. Having scored 20 for 0, the visitors will go into the final day hoping the pitch remains flat.