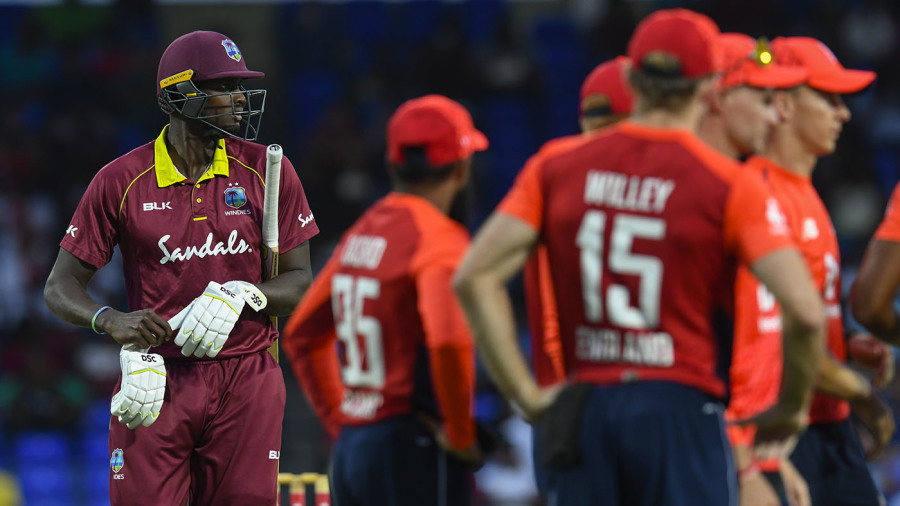 Pride is on the line for West Indies heading into the third T20I against England on Sunday. Having performed admirably in their 2-1 Test series victory and tied the ODIs 2-2, the home side will want to end the tour with far more than the whimper they produced in the second T20 to hand England an unassailable 2-0 lead in that contest.

To lose is one thing for the world champions, to be bowled out for just 45, the lowest total by any ICC Full Member nation, is quite another and, whlie acknowledging their focus was already on the World Cup, Jason Holder said West Indies had “to get ourselves attuned to the T20 game” ahead of the final match in St Kitts. On the bright side for them, West Indies improved their efforts in the field in game two after a costly rash of dropped catches previously.

England, too, have more than one eye on their World Cup campaign and, having entered the T20 series wanting to salvage something from the tour in terms of silverware, they can now focus fully on future selection and man management.

Dawid Malan spoke before the T20 series of his desire to break back into international reckoning but he is yet to be given the chance despite making four half-centuries in his five T20I appearances with a strike-rate of 150.60. Sunday marks the one and only remaining opportunity to present his case on this tour, should be chosen as an option to rest Eoin Morgan or replace Joe Denly.

Denly, who has not played an ODI since 2009, was England’s second-highest scorer behind Jonny Bairstow (68) with 30 and took 1-28 off three overs in the opening T20. He only managed to score two in the second match and could make way in the final fixture if selectors want to gauge the form of someone else, like Malan.

West Indies handed Obed McCoy a T20I debut in the second match and the 22-year-old left-arm quick faced a tough initiation, particularly when he was asked to bowl the final over of England’s innings in which he endured a dropped catch and conceded 22 runs to a rampaging Sam Billings. He eventually had Billings caught behind on the last ball. McCoy finished with 1-44 off his three overs and will be desperate for a second chance.

There are opportunities for both sides to rotate personnel and for West Indies it could be a case of nothing ventured, nothing gained. Chris Gayle, Player of the Series with his history making batting exploits in the ODIs, has been contained in the T20s with scores of just 15 and 5. He could be rested to continue planning his ODI retirement party at the age of 39 after the World Cup in favour of handing a T20I debut to John Campbell, the opening batsman who played his first Tests and ODIs against England on this tour and showed glimpses of his potential without setting those series alight.

England, meanwhile, can afford to rest even more players, having already sent home a number of their frontliners , and take a look at those on the fringes of World Cup considerations. Malan could come in to give Eoin Morgan a rest, especially if the England skipper is carrying any soreness from a bruising collision with Tom Curran while taking a catch off Shai Hope in the second match. With Chris Jordan relishing the chance to showcase his talents with the ball – and in the field – England could stick with him and keep Mark Wood in cotton wool.

The Basseterre pitch failed to produce the run-fest expected with its short boundaries – six sixes and 23 fours were scored, despite England managing to post a respectable total of 182 for 6. Nor did it necessarily turn out to be the bowl-first pitch it seemed, although it looked that way as England collapsed to 32 for 4 within the first six overs. And, who knows if it would have improved further for batting with West Indies capitulating for just 45 runs inside 12 overs in reply. The third match is expected to be played on the same pitch, so it will be interesting to see how both sides play it this time round, having had a good look now. Mild and sunny conditions are forecast.

“There’s still pride to play for, the whole purpose of keeping this squad together was to build towards the World Cup.” Jason Holder reckons there is still plenty on the line in the dead rubber

“That would be a dream.” Chris Jordan, who has been something of a re-revelation in the first two games, on the prospect of he and fellow Barbados-born bowler Jofra Archer being named in England’s World Cup squad