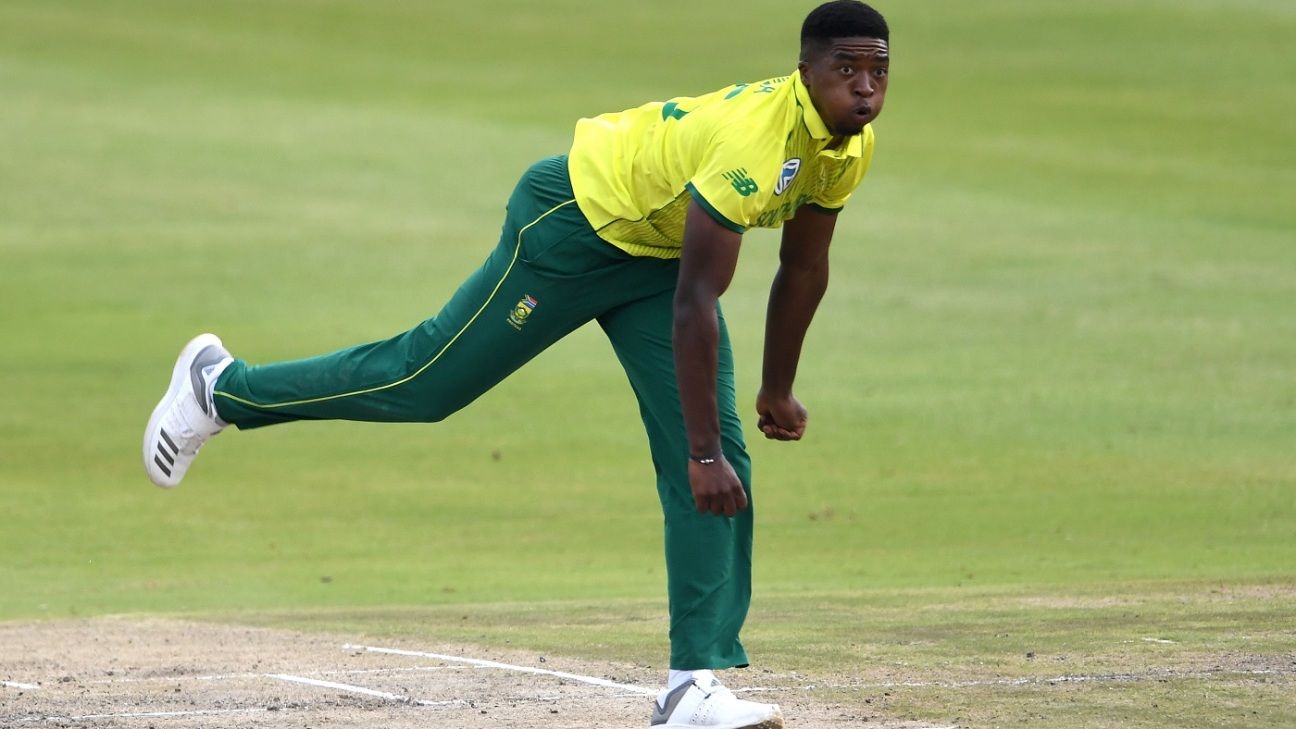 Lutho Sipamla, the 20-year-old South Africa seamer, who made his international debut in the second T20I against Pakistan last week, has credited his experience of playing under AB de Villiers in the Mzansi Super League as a “life-changing” one. While his franchise, Tshwane Spartans struggled through their campaign, Sipamla repeatedly shone both at the top of the innings and at the death for his team, gaining invaluable experience from his legendary captain along the way, as well as attracting the attention of the national selectors.

“I gained a lot of experience playing with AB,” said Sipamla. “Sharing the dressing room, training and playing with him was life-changing for me because he kept me calm. His presence calms you because he speaks to you and gives you plans. I learned a lot from that experience because at times he allowed me to set the field by myself, according to what I wanted, to help my bowling.”

Sipamla found the experience of making his international debut “impeccable”, and said words were inadequate to describe his feelings on Sunday, at a packed Wanderers’ stadium, where South Africa beat the world’s top-ranked T20 side to clinch an unassailable lead in the three-match series.

“Walking onto the pitch to a full house and knowing that I am realising a childhood dream was an impeccable moment,” Sipamla said after his debut. “Actually, words cannot describe how I felt at that moment.”

The young seamer admitted to feeling nervous before the game, though he didn’t let the nerves show with the ball in hand.

“The nerves were definitely there. I guess anyone will be nervous on the day of making a debut for the Proteas. It was about controlling the emotions and soaking everything in.”

Sipamla did not take a wicket in his first international match, but he looked the part, reining in the Pakistan batsmen after their explosive start. Brought on as first change after Babar Azam had pillaged 30 runs from the first two overs, Sipamla gave away just five singles in his first over, and followed that up with three dot balls in a row to Babar – at the time striking the ball close to 200 – when he came back on for a second over after the Powerplay.

Faced with a noticeably dry pitch and a batsman in imperious mood, Sipamla dialled his pace down a little and looked to cut the ball and vary his lengths. David Miller, his captain for the day, needed someone to regain control of the innings, and Sipamla helped bring South Africa back into the game during the middle overs.

“Our captain David Miller helped me during the game and he also allowed me to bowl the way I wanted to bowl,” said Sipamla. “When he introduced me, he gave me suggestions on field placings and how to bowl because he saw we were in trouble and not bowling the right lines. He asked me to bowl straight and try to control the run rate and I played the role of controlling rather than taking wickets.”

While Sipamla did not take a wicket on Sunday, his control with the ball undoubtedly contributed towards South Africa’s thrilling seven-run win. Should he get another game in the series finale on Wednesday, Sipamla will try to stay focused and in the moment.

“I would like to take a wicket every time I bowl but they will come by doing the right things over and over again. It is a process that will come with time, but I am looking forward to the moment of taking that first wicket for the Proteas if I get to play in the next game. It will definitely be surreal to get my first wicket and a personal milestone. But hopefully it will help the team to win because at the end of the day it is about the team and not individuals.

“I have not been thinking too much about the future because my mind at the moment is on the now. I want to stay here because the environment is good and I want to play for my country as long as possible.”