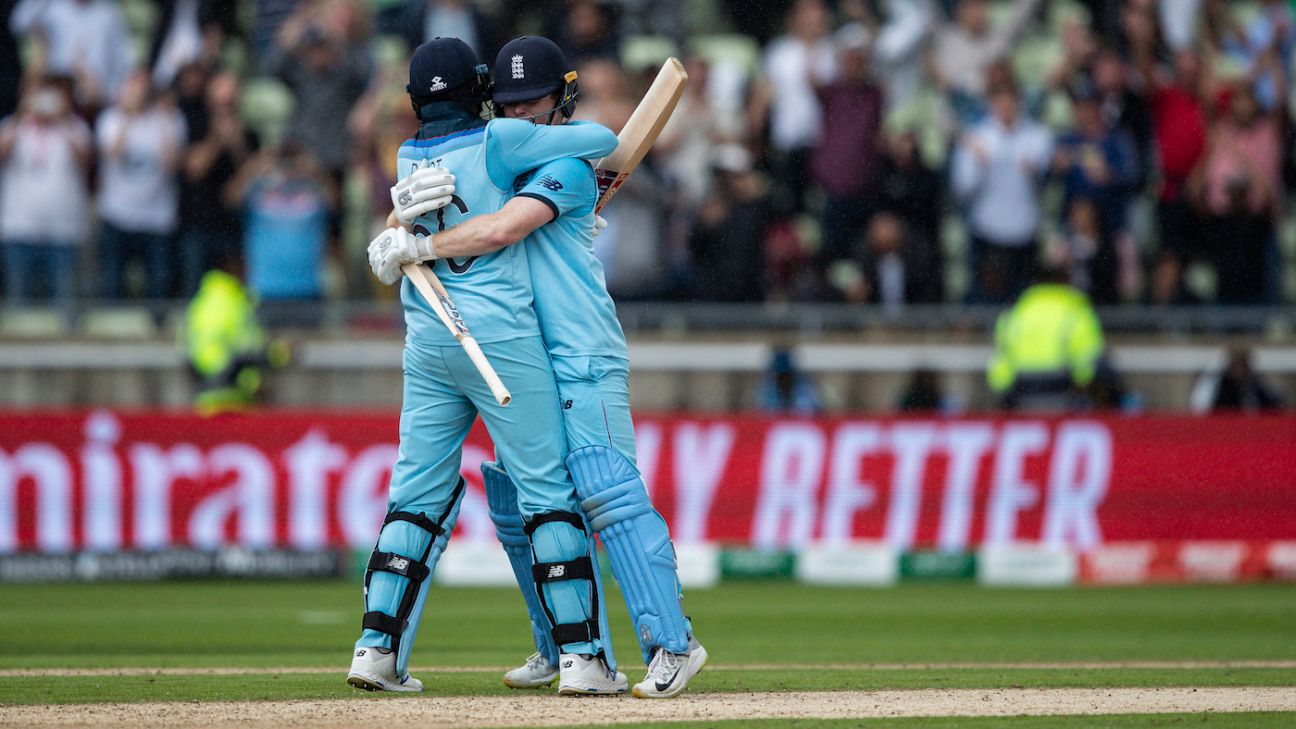 Eoin Morgan has admitted the prospect of playing in a World Cup final seemed laughable by the time England were knocked out of the 2015 World Cup.

England endured a miserable campaign in New Zealand and Australia four-years ago sustaining a series of crushing defeats and failing to make it to the quarter-finals.

But a resounding victory over Australia at Edgbaston on Thursday means England will play their first World Cup final since 1992 at Lord’s on Sunday. All of which left Morgan, the England captain, reflecting on a remarkable improvement in his side’s ODI cricket during the last four years.

“If you had offered us the position to play in a final the day after we were knocked out of the 2015 Cup, I would have laughed at you,” Morgan said. “Looking back where we were in 2015 to where we will be on Sunday, it is a dramatic improvement in the style of play and the level of expectation which we’ve created.

“In 2015 we were way off the mark. We struggled against the top teams – and the teams below that level – so there was quite a drastic change in the way we played and the way we looked at playing our 50-over cricket. The last four years have been a process.”

Chris Woakes was named Player of the Match for his return of 3 for 20, but Morgan was equally full of praise for Jonny Bairstow and Jason Roy, who recorded their fourth century partnership in succession.

“Chris is a cool customer,” he said. “He goes about his business, day in and day out, exceptionally. Today was his day. He and Jofra Archer were outstanding. It was one of our bowlers’ standout performances in the last four years.

“Jason and Jonny are in the form of their lives. They are imposing when they get in. And they set the tone for the whole group.”

While Morgan accepts Sunday’s final will be a high-profile affair, he is urging his team to embrace the occasion and continue to play the bold style of cricket that earned them victory on Thursday.

“Sunday’s not a day to shy away from,” Morgan said. “It’s a day to look forward to. We have created the opportunity to play in a World Cup final. It will be a matter of trying to produce everything that we can performance-wise, but enjoy the day.

“It’s an opportunity for us on Sunday. A huge one. Making the most of the opportunity of getting to the final would be fantastic, but just getting there is awesome.

“Everybody out there on the field and in the changing room loved every ball that was bowled [against Australia]. There was no lack of commitment, application and we had a bit of a day out. It’s cool when it happens like that, particularly when the bowlers bowl like that. It is awesome.”

Morgan is particularly pleased that Sunday’s final will be broadcast free-to-air on Channel 4 or, while the British Grand Prix is in progress, on More 4. He says his own experiences of watching cricket on free to air television helped inspire his love for the game and hopes more people will now have the same opportunity.

“It’s very cool,” he said. “Particularly given that the 2005 Ashes [which was the last series broadcast free-to-air in the UK] was, for me, sort of the day cricket became cool. Throughout the whole summer, the game was on the front and back page of every newspaper and everyone was talking about it. That is really good for the game and it’s the game I love, so it’s great news that it’s on free-to-air.”