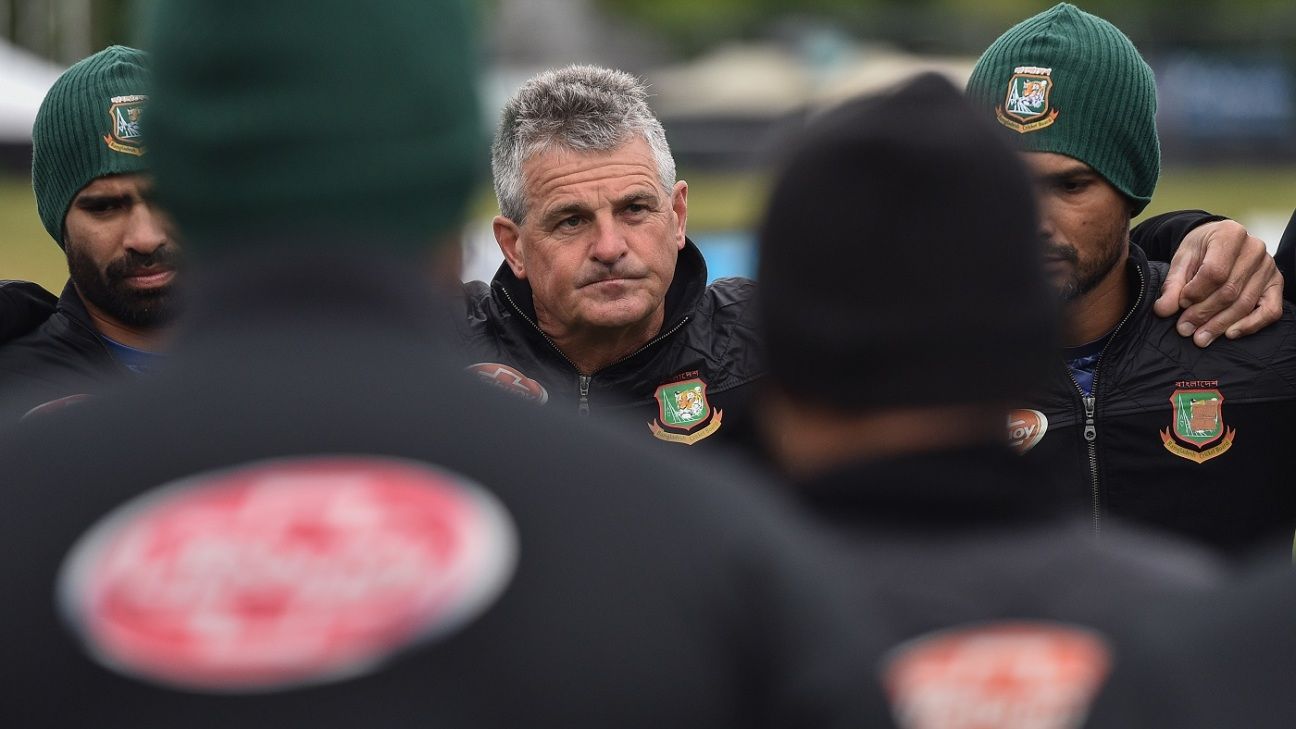 Nazmul Hassan, president of the Bangladesh Cricket Board, has come down heavily on Steve Rhodes‘ one-year tenure as coach of the national team. Hassan alleged that Rhodes did not seem serious enough about winning as a coach, did not push the players hard during a pre-World Cup preparation camp in Leicester, and was not involved in strategic matters. Rhodes did not respond to ESPNcricinfo when contacted about these allegations.

Rhodes was appointed Bangladesh coach in June 2018, with his contract set to run until next year’s T20 World Cup. However, the BCB and Rhodes parted ways earlier this month, following the team’s eighth-place finish at the 2019 World Cup in England.

Hassan said that the players had told him they did not get to speak to Rhodes, and that he did not address team strategies.

“We arranged for a practice camp before the World Cup, but nobody came. There was a cultural mismatch. He assumed that every player will practice on their own, but since our players heard it was optional, no one turned up. So there was no use making all that arrangement spending so much money.”

“I saw the changes [in the style of coaching] when I was in Dubai for the Asia Cup final. We saw that things have changed. We waited. The players have told me continuously – after the New Zealand tour and also during the World Cup – that they don’t get to speak to the coach.

“He only lands in the team meeting on the day before the game. He doesn’t talk about strategy. He is just there. This is what the players have told me. I am telling you after listening to everyone. I never had a direct interaction. But from what I have seen, I felt that he doesn’t match with us.”

Hassan believed that a five-day break for the team during their World Cup campaign -in the eight-day gap between their matches against Afghanistan and India – affected the concentration of the players, even though the team had been given a break to freshen up. He claimed that players had gone to Europe and expressed his surprise that nobody had informed him or the board directors Akram Khan (present with the World Cup squad as cricket operations chairman) and Khaled Mahmud (team manager) of the break. However, the players had been informed of the break by the team management, led by Mahmud. and none of them visited Europe.

“There was a five-day holiday before the India game,” Hassan said. “There’s a difference between giving rest and a break. Everyone had left, so it broke their concentration. Maybe it is fine in their culture, but we feel that it doesn’t match with our culture.

“Ahead of matches against two tough opponents, how does it feel to know that your players have gone to Europe? It is not acceptable. I don’t care what anyone is saying. I don’t think it was the right decision. You can give rest for two or three days. Their eyes and face should have said that they were thinking about the World Cup, the next two games. They haven’t matured as cricketers to come back from this type of break.”

“The biggest surprise was that I didn’t know that the team was on holiday. It hasn’t happened before. This was definitely a lapse but I am not singling out anyone. We had Akram [Khan] and [Khaled Mahmud] Sujon who were there but they also didn’t know. They heard about it after the break was given, so how did it benefit us?”

Hassan claimed that captain Mashrafe Mortaza and wicketkeeper Mushfiqur Rahim were added to the squad on the morning of the team’s last game against Pakistan, despite them carrying injuries.

“The night before the Pakistan game, I was with the players till 11.30pm. Mushfiq, with his hand in a sling, was telling me that he couldn’t move his hand,” Hassan said. “He was not in the squad. Mashrafe didn’t practice the day before, and neither did he attend strategy meetings. He was also out of that game. These are just two examples.

“We had fixed the squad in the presence of the coach and everyone. But the next day we saw another team playing the game. These things haven’t happened in the past. This is definitely a problem. We have decided that it won’t work like this. We are not saying he is not good but the way the team was running, it was totally different from our thinking.”