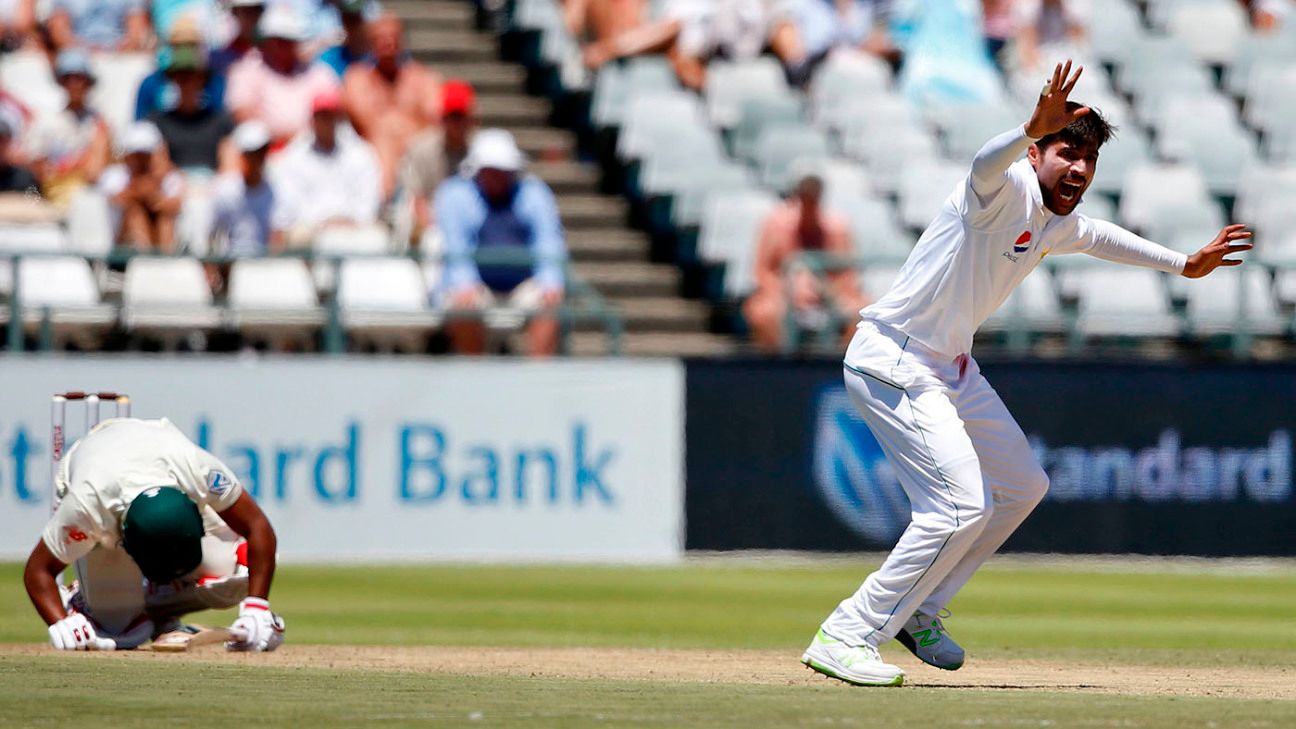 Mohammad Amir may have taken time to put plans into action, but South Africa found themselves in a straitjacket once he began to execute them. Having gone wicketless despite being the tightest of the Pakistan bowlers in a pair of sessions where South Africa scored close to four runs per over, the left-arm fast bowler found his rewards after tea.

For his part, Amir said the riches he and his fellow bowlers found after tea had to do with sticking to the plans more effectively than they had done on a surface that offers more to the batsmen than the previous two did.

“When the batsman is settled in, he can get the runs. It’s very difficult to control the run rate but as I said, if you stick with the plans, you can get rewards,” he said. “You have to bowl as a combination. It’s a bowling unit so we have to back each other up. I think (Mohammad) Abbas and I were doing that because that was the plan to control the run rate. That’s why we were successful.”

Numbers show Amir was most effective just short of a good length. Of the 27 balls, he conceded nine runs; it was also the length that brought him both wickets. In addition, the South African batsmen were in control for just 70.3% of the deliveries Amir bowled at that length, the least comfortable they were at any length for any bowler all innings.

Amir said there wasn’t a special plan for any batsmen, but added that Aiden Markram had played exceptionally well and required the greatest effort to bring back under control.

“I was bowling with the same plan. He was a good batsman playing very good shots. We were bowling with the plan, we had to bowl on middle and off. We don’t want to give him runs and we did it.”

Pakistan’s bowling fightback aside, the mood after the high of the final session would be slightly sullied by losing two early wickets in an awkward seven overs before stumps. Most worryingly, it was the man in form, Shan Masood, and the man supposed to be the leader of the batting attack, Azhar Ali, who succumbed before play, leading Amir to believe the game was very much in the balance.

“It’s a 50/50 call [on who won the day],” he said. “It’s Test cricket and you can’t predict anything before the match ends. We have to bat well and if we don’t lose a wicket in the first session (on Saturday) we have a good chance. We are teammates and we have to back up each other. It’s cricket and anything can happen. Sometimes I didn’t bowl well and sometimes you struggle with the batting. It’s all about momentum.”