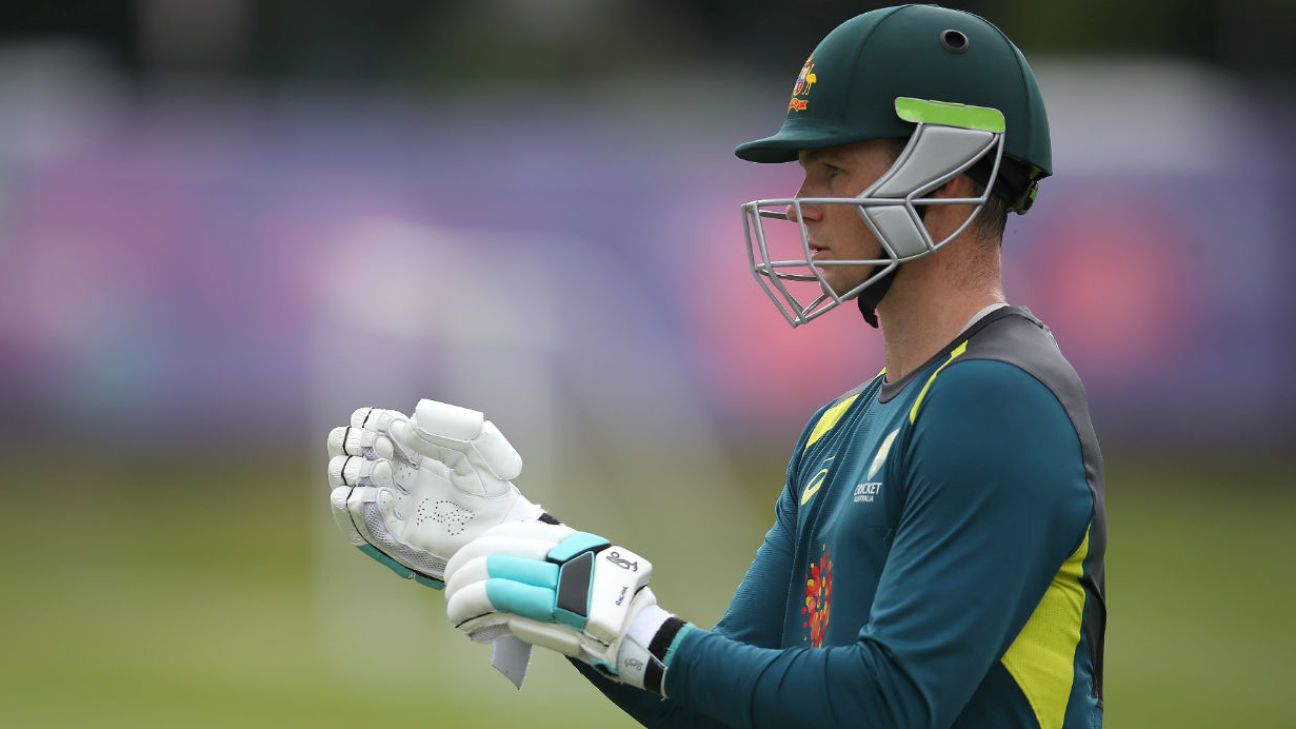 Marcus Stoinis will be fit to play in Australia’s semi-final against England and Peter Handscomb will be in the XI as a replacement for Usman Khawaja, according to Justin Langer.

Stoinis appeared to have recovered from a side strain he sustained in Australia’s loss to South Africa and batted and bowled during Tuesday’s training session at Edgbaston.

“He looks good,” said Langer after training. “It was a very good nets session actually, there was a bit of heat in there again and it was very competitive and that always brings the best out in ‘Stoins’, so he did a good job today and he’s fit to go.”

Handscomb initially joined the squad as a replacement for Shaun Marsh, who was earlier ruled out of the tournament with a broken forearm. Matthew Wade and Mitchell Marsh were also called in as cover for Khawaja and Stoinis, but Langer indicated that only Handscomb was likely to come straight into the team.

“I’ll tell you the truth. Peter Handscomb will definitely play, 100 percent” said Langer. “He deserves it. He was stiff not to be on this tour, he was so unlucky not to be in the initial squad after what he’d done to get us to that point. He’s in good form, he played well for Australia A, gives us that nice balance in the middle order. He’s got good temperament, he plays spin well, he’s on top of his game, so Pete will definitely play.”

Australia’s relaxed air was evident as they prefaced their training session by singing happy birthday to Austin Marsh, son of Shaun. Later in the afternoon, some of the players wrestled with the toddler on the outfield. The previous day the entire squad walked barefoot around the outfield, a practice described by some onlookers as a type of connecting or ‘earthing’, but the notion of any new-age ritual was shot down by Langer, who said it was something he would often do with his opening partner, Mathew Hayden.

“What was it called?” asked Langer. “I don’t know what you call it, we just took our shoes and socks off and walked a lap of the oval. It’s a nice thing to do, it’s a nice place to be. Haydos and I used to do it, just as a bit of a ritual before every Test match.

“You can walk on the best grounds in the world with your shoes off. So there’s nothing to it. We walked a lap of the oval, we had a tough game against South Africa, it’s just about staying as relaxed as possible.

“We know we’re going to be up against it. England are a great team and we’ve got to be at our best, and the best way to be at your best is to be nice and relaxed. It was just walking a lap of the oval with our shoes off. We could’ve done it with our shoes on and nobody would’ve said anything.”

There is certainly a far more laid back appearance to this squad than the last time they faced England at Edgbaston. In the only T20I of their 2018 tour, Australia lost by 28 runs before going on to lose all five ODIs of the series. But this Australian squad has a very different look, both in personnel and mental state.

“Peter Handscomb will definitely play, 100 percent. He deserves it. He was stiff not to be on this tour, he was so unlucky not to be in the initial squad after what he’d done to get us to that point.”

“If you go back 12 months ago there wasn’t too much to be relaxed and chilled about in Australian cricket, was there?” Langer said. “And that’s the truth. We went through a major crisis in our cricket. It didn’t just affect our cricket, it affected our country, so there wasn’t too much to be relaxed about. We’ve had to work hard on being more humble in what we do and being focussed on playing good cricket but also being good people as well. And I know there will be some English people who will laugh about that but its actually true. We had to work hard on that and that’s a good bunch of players.

“You get more relaxed as you start playing better as an individual or as a team. Maybe we are a bit more relaxed but only on the back of playing good cricket and having had to work hard on that.”

While Australia’s squad bears little resemblance to the one that was trounced last summer, Langer said he admires the way England have built a strong squad through continuity.

“And they’ve obviously got a good game plan and a lot of very talented cricketers. All those factors combined is why they’re the best team in the world at the moment. And we’re aware of that – it’s going to be a really tough game on Thursday – but looking forward to it as well. It’s always nice, England playing Australia in the Ashes or big games like this. We’re looking forward to it. It’s going to be a lot of fun.

“I have maintained it from day one, England are going to be really hard to beat in this tournament. They had a couple of little blips, but they fought back really strongly and that’s what we expected to happen.”