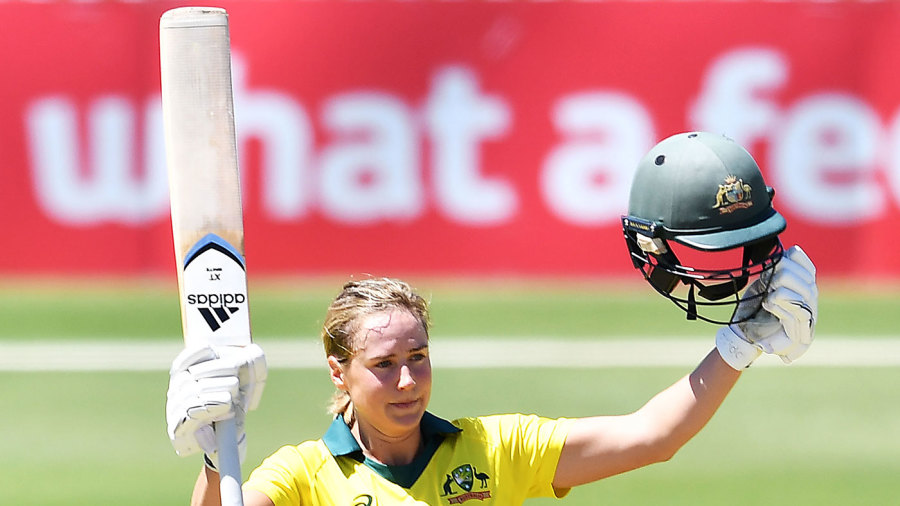 Australia maintained more than two decades of dominance in their Rose Bowl encounters with New Zealand as Ellyse Perry and Jess Jonassen led the hosts to a blistering 95-run victory at Karen Rolton Oval that sealed the series with one match to play.

Perry formed the spine of Australia’s innings after they were sent in by New Zealand’s captain Amy Satterthwaite, shrugging off an early wobble at 3 for 85 to form a critical stand worth 98 with Beth Mooney before accelerating grandly in the final overs to notch her first ever ODI century.

The New Zealand reply, having fallen a mere five runs short of Australia in the series opener in Perth, appeared to be on course as Satterthwaite and Sophie Devine set up a more than useful platform at 2 for 93 in the 21st over.

However, Jonassen intervened with the key wicket of Devine, lbw on the back foot to a ball that skidded through straight, and thereafter the left-arm spinner enjoyed the best ODI bowling day of her career, scooping 5 for 27 as the tourists fell a long way short of their target on a warm afternoon in Adelaide.

Thins had begun far more promisingly for New Zealand, with the early progress of Australia contained by the loss of regular wickets that prevented any partnerships of note while Rachel Haynes, Meg Lanning and Alyssa Healy all fell inside the first 23 overs.

Perry, known for her preference to build an innings steadily before moving through the gears later on, was thus left with plenty of overs in which to bat, but needed to find an ally capable of turning the strike over.

Mooney, so vital in the Brisbane Heat’s WBBL final victory over Perry’s Sydney Sixers earlier in the season, provided precisely this kind of supporting act, allowing the Australians to build to what appeared to be an ideal platform entering the final 10 overs.

Amelia Kerr gave the innings a decided twist when she found a way past Mooney, Elyse Villani and Ashleigh Gardner in the space of four balls, but Jonassen provided vital support to Perry in the closing overs as the pair raised a stand of 44 in 35 balls.

Assured as she reached the cusp of a hundred, Perry was nonetheless fortunate to reach the milestone, as her aerial hit out to deep midwicket burst through the fingers of Anna Peterson before scuttling away to the boundary to mean she has now scored a century in both Tests and ODIs for Australia.

In pursuit, Suzie Bates was gone early on when she dragged an exultant Perry onto the stumps, but Satterthwaite and Devine seemed very much to be giving New Zealand the chance of levelling the series.

Jonassen, though, had other ideas, plucking five wickets while Satterthwaite was fired out by a tremendous flat throw from Villani as the visiting captain was involved in a mix-up between the wickets with Hayley Jensen.

In the end, the Australians were toasting a match and series victory with more than 12 overs to spare, meaning they have retained the Rose Bowl on every occasion since 1999.