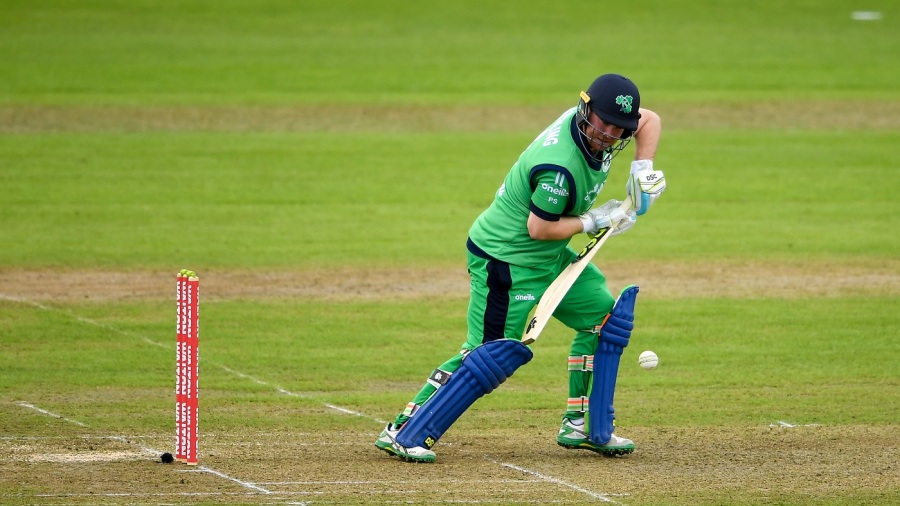 A blazing Paul Stirling special powered Ireland to a nine-wicket demolition of Zimbabwe in the rain-truncated second T20I in Bready. Craig Ervine’s rapid fifty lifted Zimbabwe to 132 for 8 in their 13 overs, but Stirling made light of Ireland’s DLS-adjusted total of 134 with an innings remarkable for the ferocity and adventure of its strokeplay. Flaying pace and spin alike, Stirling cracked seven sixes and six fours in an unbeaten 36-ball 83. He shared an opening stand of 58 with Kevin O’Brien before sealing the match with a 76-run partnership alongside Andy Balbirnie that took up all of 5.5 overs. Unless the visitors can pull off what would be, at this stage, a surprise win on Sunday, a clean sweep is very much on.

Before today, no-one had more sixes for Ireland in this format than Kevin O’Brien, but that record now belongs to Stirling. With a required rate of 10.3 from the start in their shortened chase, the two most destructive batsmen to have played for Ireland opened the batting together and quickly set about Zimbabwe’s bowlers. O’Brien didn’t add to his 46 maximums in his knock, but his breezy 13-ball 19 added to Stirling’s merry hitting at the other end as Ireland rocketed past fifty in just the fourth over. This was the seventh time O’Brien and Stirling have opened together in this format, and the third time they have added fifty-plus together.

Having started his innings with 44 career T20I sixes to his name, Stirling got going with a remarkable bottom-handed flamingo flicked six in Tendai Chatara’s first over, and then drew level with O’Brien by launching Chris Mpofu over long-off an over later. Shrugging off O’Brien’s dismissal to a smart catch in the outfield, Stirling made the record his own with a brace of mighty hits over the leg side off Ryan Burl’s legspin.

Balbirnie was made to look almost anonymous at the other end, despite working the angles well and striking four boundaries of his own while Stirling ruthlessly dismantled Zimbabwe’s attack. Sikandar Raza was reduced to bowling seam-up slow-mediums as Stirling dispatched his first two balls of the game cleanly out of the ground, and as early as the ninth over, a stiff chase had become a simple one and Ireland needed less than a run-a-ball.

Not that Stirling showed any sign of slowing up. He spanked a seventh six, and the 51st of his career in this format, walking across the crease to lift Kyle Jarvis high over square leg, before fittingly tapping the winning run to put Ireland 1-0 up.

Left handers on the charge

Zimbabwe have been desperate for a batsman of Stirling’s pedigree at the top of their order on this tour, but neither Brendan Taylor nor Hamilton Masakadza have particularly enjoyed themselves with the bat on this tour. Zimbabwe’s two most senior batsmen’s iffy run continued as both were back in the pavilion two balls into the fourth over. That brought the left-handed pair of Ervine and Sean Williams together, and for the four-and-a-half overs they were together – on either side of a rain break that lasted almost 90 minutes – Zimbabwe controlled the game.

Williams came into this game on the back of two measured fifties in the ODIs, but with rain circling there was no time to be wasted and he burst out of the blocks, cracking the first two balls he faced sweetly to the cover boundary. When play resumed with Zimbabwe having lost seven overs from their innings, both men were in a hurry, hitting five sixes in the space of 12 deliveries after the resumption.

While Williams couldn’t add another fifty to his name, Ervine motored on to a 28-ball fifty – the second of his career in this format – in the tenth over. Together, they had set Zimbabwe up, but Ireland’s seamers brought their team back at the death.

Adair in the wickets

One of two Ireland debutants today, Mark Adair struck a vital early blow when he had Taylor caught off a swirling top edge. He then returned after the rain break to halt Williams and Ervine’s charge, and while Zimbabwe targeted quick runs, Adair found the low, dipping full toss to be his most incisive delivery.

Williams sliced one such delivery into the hands of Stirling at cover, while Ervine lined up another full toss but could only get it as far as Tyrone Kane, who sprinted around the midwicket boundary to hold a sharp catch. A third full toss brought Adair his fourth wicket, PJ Moor skying a catch out to Balbirnie in the deep, and with Shane Getkate and Craig Young also chipping in with wickets, Zimbabwe could never completely pull away with the bat.