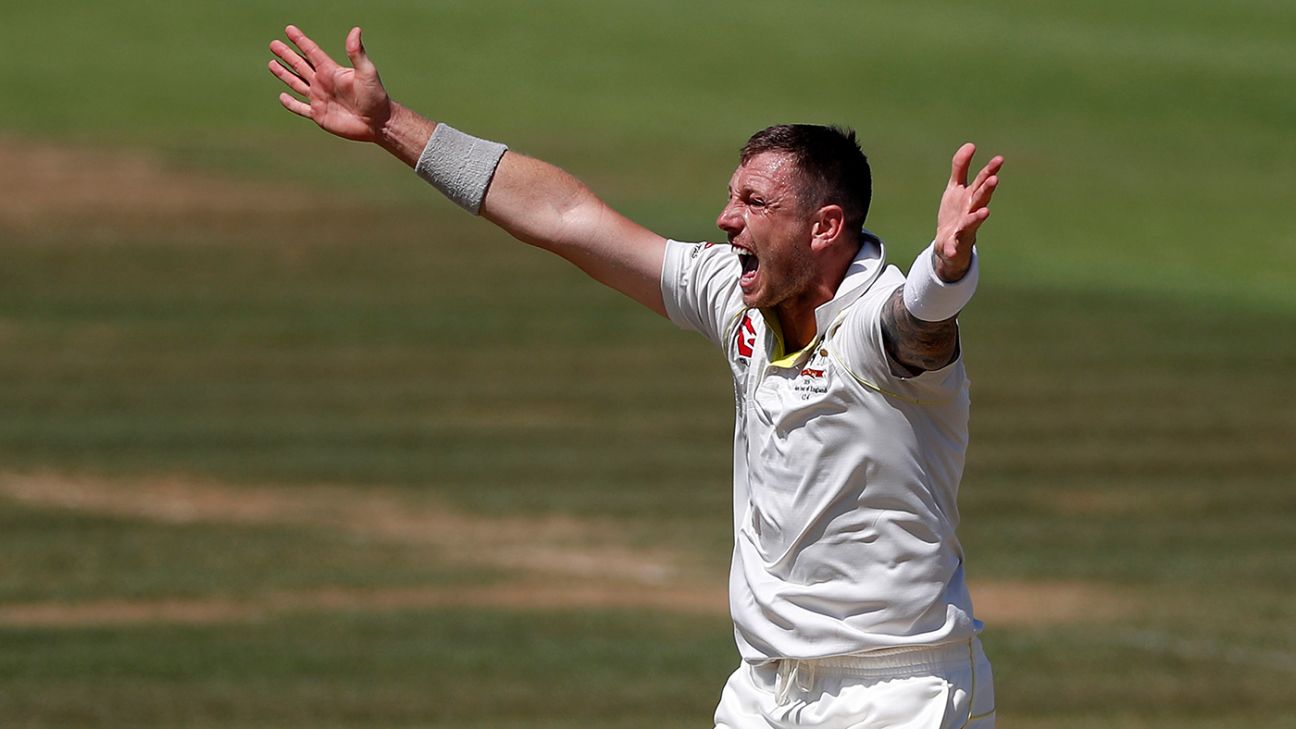 Having seen James Pattinson up close, even Australia’s Test match spearhead Pat Cummins can only agree that it may be the touring side’s best option for the Ashes to break up the hegemony of the “big three” he has comprised with Mitchell Starc and Josh Hazlewood.

In a warm-up match billed as little short of bloodsport between the fringe members of the Australian squad, Pattinson has been a standout performer, confirming the danger he can pose when in rhythm with the Dukes ball in English conditions.

As arguably the shrewdest bowler in the Australian attack, and recently joint vice-captain to Tim Paine alongside Travis Head, Cummins could not deny the evidence of his eyes after seeing Pattinson at very near his best in Southampton – room must be found for him to return to the Test team, even if it means one of Starc or Hazlewood make way.

“Yeah, potentially. I think we are blessed at the moment with riches,” Cummins said. “As long as I’ve been playing, Patto’s always been around and unfortunately hasn’t had great momentum the last few years. The four of us have been around. Sids [Peter Siddle] has obviously played a lot and done really well over here. We’ve got Tremain, Bird, Neser who have also done really well for Aussie A. It’s a weird one, because everyone’s been bowling beautifully.

“It’s going to be tough to whittle that down to five or six for the selectors. But we’ll see what the selectors go with. I like bowling with all of those guys. I’ve done a little bit with all of them. In the five-Test match series in Australia, we played four of them. But it’s very rare that you keep the whole group together for five Tests so whoever it is, everyone’s in form and bowling well. They all get along. So let’s see what happens.”

Speaking specifically about Pattinson, who claimed 4 for 35 across 23 overs over two innings in the warm-up game, Cummins said that with all cylinders firing, the 29-year-old was nothing short of world class. “He’s impressive isn’t he? It’s the first time I’ve seen him live in a couple of years,” Cummins said.

“You hear from guys playing him in state cricket, and who’ve faced him in the nets, about how well he’s been bowling. When he’s on fire, he looks that class above. His Test record so far is brilliant. Unfortunately, he hasn’t played for a few years.

“I haven’t played a lot with him to be honest. In terms of changes, I haven’t seen a lot. I think, if there’s anything, he’s a bit more patient. He still gets fired-up but he’s not trying to blast teams away. He’s confident in his body and getting through 20 overs in a day and just bowling good areas. When he’s up and running, he looks as good as anyone else in the world I reckon.”

Cummins was an important if somewhat low profile performer during the World Cup, often taking on the middle overs while Starc dominated the top and tail, but in Test matches he has a far more central role. With Starc off the field to get precautionary scans on a sore knee, Cummins took the new ball in the second innings, responding with the wicket of Joe Burns.

“I hadn’t bowled a long spell for quite a while and trying to learn some of the nuances of bowling in Test matches,” he said. “That first spell I think I bowled seven yesterday. It is kind of weird. You start of fresh and then after three or four, you’re hurting a little bit. So just those kinds of things, trying to bowl a few bouncers and get the pace up. It’s nice. I think there’s probably not too many bowlers going around the world who’ll say they prefer one-day cricket.

“I’ve always found there’s something a little bit more in the wicket, a little more with the red ball. It seems to swing a bit more and stay hard a bit longer. And I like the contest of bowling 20 overs in a day and trying to outthink batsmen, use your bouncers. There are so many different phases of Test cricket. It’s my favourite form of cricket. You play cricket because you want to influence games and win games. As a bowler, when you’re sitting at home and chuck on the TV you see a swinging Dukes ball, you get pretty excited so we’re here.

“Hopefully, we get some wickets where it’s going to swing and seam. I’m excited. I think the last six months we’ve bowled with the white ball, knowing that once we get the Dukes ball, hopefully it will swing a bit more and be able to adjust to that. And after a couple of sessions, I feel like I am where I want to be. We know not every Test match the ball swings around, but you feel like you’re always in the game.”