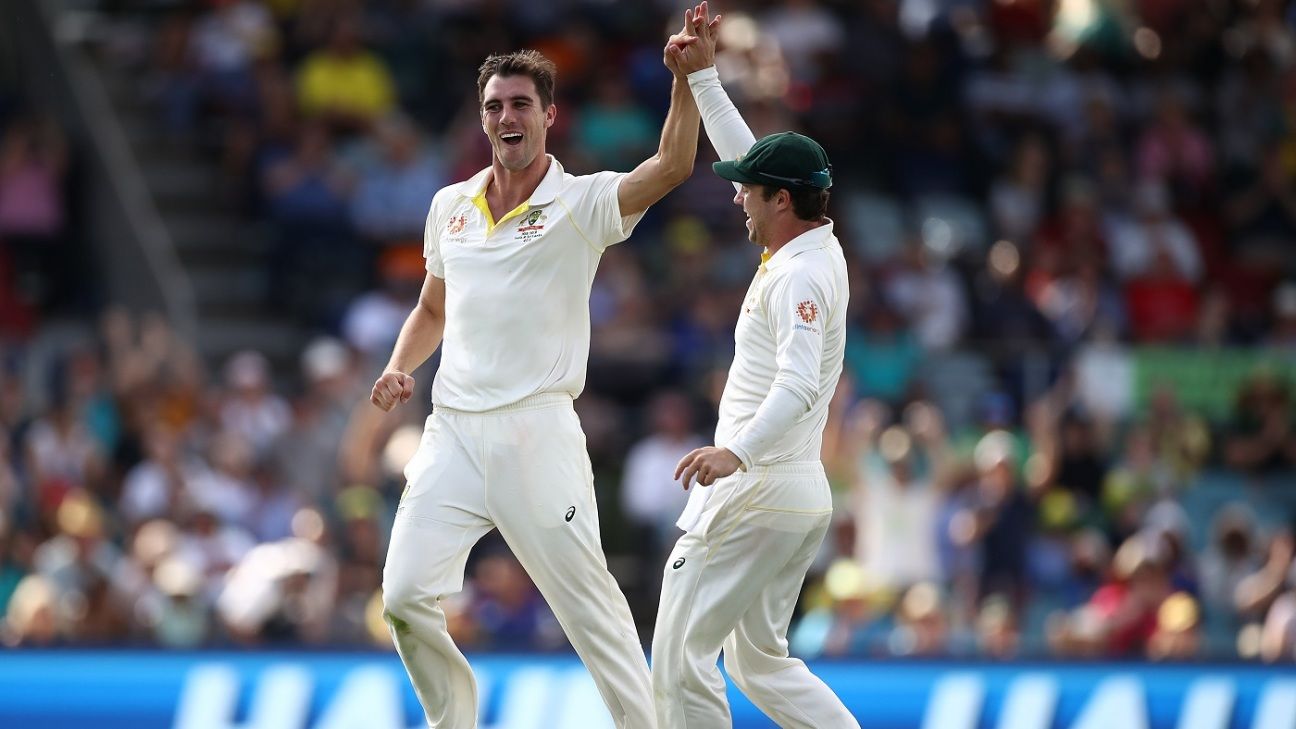 Four years ago Pat Cummins was pretty happy to be running drinks in an Ashes series in England. Fair enough too, given that his injury record over the preceding few summers had made his selection for Test matches a near impossibility.

In 2019, however, Cummins looms as perhaps the key figure in the entire series, given his outstanding displays in Test matches for Australia to date that have made him by far the most reliable contributor to the attack that Tim Paine will marshal as captain in the touring side’s attempt to retain the urn in England for the first time since 2001.

When Cummins was called up in 2015, after a succession of injuries finally forced Ryan Harris into retirement, it was without any first-class cricket to his credit for the preceding two years. A couple of tour games were the sum total of his playing time, and it was not to be until 2017 that Cummins returned to Test matches for the first time since his storied 2011 debut. In that time he has rushed to 94 wickets in 20 Tests, and six victims in the series opener at Edgbaston would make him the fastest into three figures for Australia since Charlie “Terror” Turner in the 1890s.

“I feel like it was hardly me,” Cummins said of his 2015 self. “I think I had only played a couple of first-class games, I might have played my first first-class game in about three or four years on that tour. Totally different action, was still struggling with my body trying to bowl back-to-back days, trying to bowl 20 overs in a day.

“It was more just absolute excitement at being on that tour. I just remember running the drinks in an Ashes series, I remember thinking ‘it doesn’t get much better than this’. So I just hope that this time playing, it’s a bit different.”

Australia will hope so too, for Cummins has brought a combination of pace, skill and heart that have brought cricket watchers to their feet more than once. Incisive against England and South Africa in 2017-18, he did not let his performance dip much at all in the wake of the Newlands scandal, scooping 28 wickets from six Tests against India and Sri Lanka last summer.

By way of preparation for the Ashes after the emotional peaks and troughs of the World Cup, Cummins said the key thing was reminding himself, and his fellow pacemen, of what they do well in Tests, with the added feature of a Dukes ball that will provide them with assistance for longer periods than a Kookaburra.

“As a bowler it’s pretty simple,” he said. “Plan A is normally top of off and hope to get a bit of sideways movement, and I’m sure that over here it’s not going to be too different. I’m sure once we get close to the game we’re going to look at their batsmen.

“There’s a few guys that we haven’t played against before in Test matches, but I think the big thing for us bowlers is to remember what we do well and trying to remember that after not playing for a couple of months. Looking through some old Test match footage and concentrating more on what we do well than on certain weaknesses [in the opposition].

“I’m pumped to have a [Dukes] ball that hopefully swings around a bit more for me and hopefully a batsman leaves a ball every now and then. Probably the way it pans out in 80 overs is slightly different to a Kookaburra, but the way you actually bowl, the basics are still there. I’m sure I’ll pick up a couple of things in the next few weeks though.”

So much of a leader has Cummins become that it will be intriguing to see whether he is promoted to the Test vice-captaincy for this series when the squad is named at the end of the internal trial match between a Hick XI and a Haddin XI in Southampton next week. While Josh Hazlewood and Mitchell Marsh shared the title initially, both were missing from the Test team at various points of the summer, with Head and Cummins taking their places.

Either way, the returns of Steven Smith and David Warner from suspension mean a strong degree of continuity in the Australia squad – of the XI that ended the 2017-18 Ashes in possession of the urn, only Shaun Marsh (broken arm) is absent.

“When you look at our Test side from the home series last year, we’ve basically got the same squad,” Cummins said. “We haven’t lost anyone from memory, and they’re much the same. They’ve got a couple of guys coming in, their batting order’s going to look slightly different, but probably similar to both sides is that our white-ball teams are quite different to our red-ball team. No matter who’s playing, it’s always fiery, it’s intense, it’s really good cricket. So I can’t wait.

“I think it’s pretty easy when you’ve got an Ashes series. Although there’s been a lot of white-ball cricket this has been the big series we’ve been talking about for a long time in red ball. The good thing coming out of the World Cup is I still feel in pretty good shape, refreshed, body’s good. We’ve got a couple of weeks here now to work on that Dukes ball. Don’t have to rush it too much, we’ve got a good hit-out here, I love playing the red ball, it’s pretty easy to get up for.”

And while Cummins conceded there was a mental toll in terms of disappointment and frustration at losing their World Cup semi-final so badly to England, he also reasoned that adjusting from white ball to red is a simpler task for him than the opposite.

“It was disappointing to get knocked out in the semis in a tournament where I thought we played really well for the whole time,” Cummins said. “We gave ourselves a really good chance. It felt like we were peaking at the right time, always in search of that perfect game which we probably needed in the semi. Unfortunately we weren’t at our best that day and got knocked out but that’s the World Cup.

“I think the most difficult one is going the other way and trying to re-learn death bowling, trying to re-learn your yorkers and slower balls. Those kind of things are probably harder than adjusting here, most of the basics kind of stay the same. It’s just trying to make sure your wrist is good to swing the ball.”