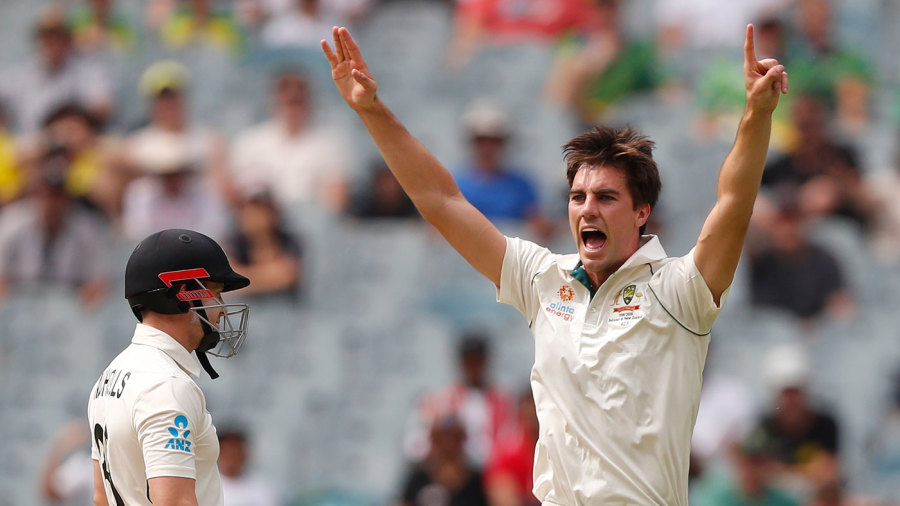 New Zealand’s middle order was picked apart by world-class bowling from Australia’s trio of quicks as they lurched to lunch on the third day on 6 for 102. Pat Cummins was on a hat-trick in the third over of the morning when he removed Ross Taylor and Henry Nicholls, James Pattinson produced a beauty to remove BJ Watling and Mitchell Starc joined in to remove Colin de Grandhomme.

Tom Latham stood out amid the wreckage as he reached the break on 42 off 127 balls, repelling everything that was hurled at him from the quicks and Nathan Lyon. It could have been worse for New Zealand if Mitchell Santner hadn’t benefitted from a controversial DRS ruling from the third umpire when he appeared to glove Starc but there chances of even getting a draw appeared in ruins.

New Zealand’s ambitions at the start of the day rested on Latham and Taylor, the latter needing 47 more runs to become his country’s leading scorer in Tests, but that lasted just 12 balls as technique and ticker was tested with every delivery.

The first ball of Cummins’ second over drew Taylor into a flat-footed drive with the thick edge flying quickly to Marnus Labuschagne at third slip where it was parried into the air and settled comfortably for Joe Burns at first. Next ball, Cummins came around the wicket to Nicholls and pinned the left hander lbw with the review from Nicholls showing it would have hit the top of leg stump.

With the roar of the MCG crowd behind him, Cummins ran in for his hat-trick ball but Watling was able to keep it out. However, having managed to get onto the front foot a couple of times, he was not able to survive much longer when Pattinson produced a beauty that bounced from short of a length and took the shoulder of the bat to first slip to leave New Zealand 5 for 58.

The bleeding was momentarily stopped by Latham and de Grandhomme – helped by a surprising over for Matthew Wade which cost 13, four more than Cummins conceded in five overs – as Latham continued to show great composure in the face of the onslaught. de Grandhomme was less convincing and it was not a huge surprise when he fended an edge to gully off Starc.

Two balls later Starc, and the rest of the Australians, were convinced they had another when Santner fended a bouncer to leg gully. It was given not out on the field by Marais Erasmus and Tim Paine reviewed. As more replays came through the Australians become more sure, and with good reason, that it had brushed the wrist band before coming off the arm guard but eventually third umpire Aleem Dar said there wasn’t conclusive evidence to overturn. Paine was far from impressed and had a lengthy discussion with Erasmus.