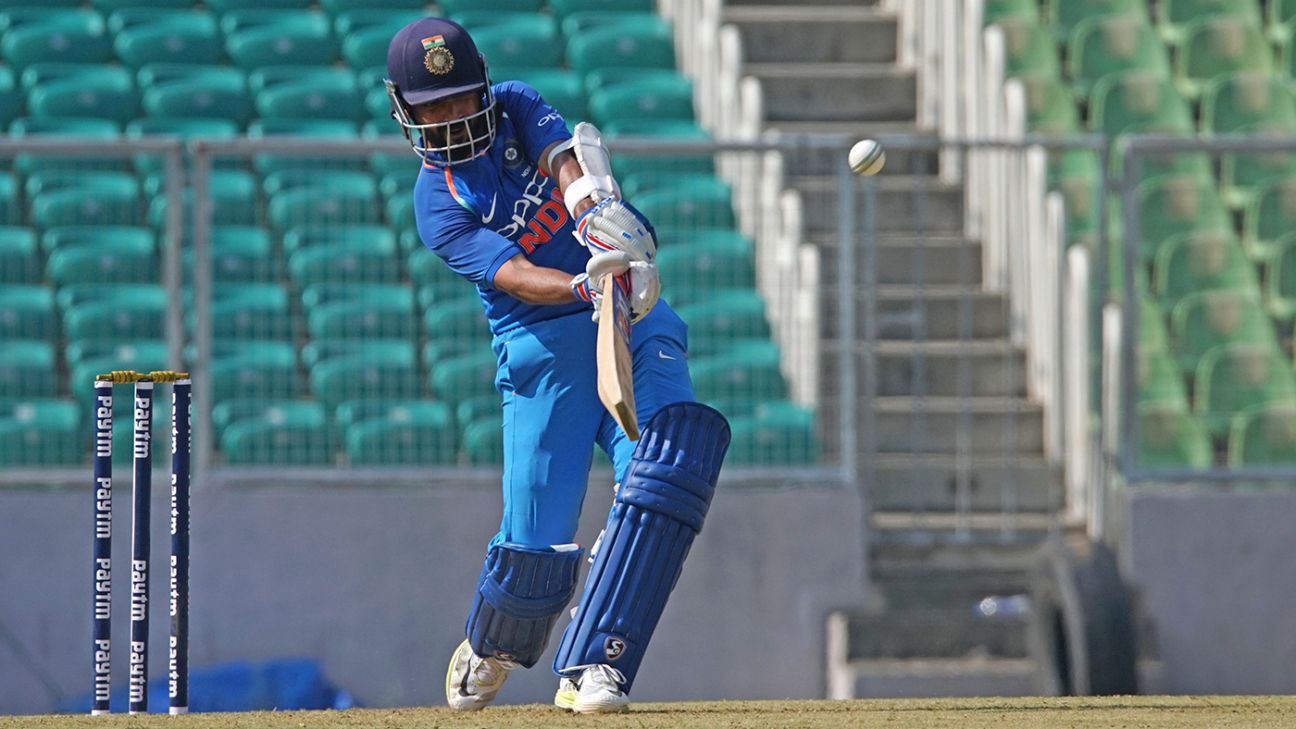 Rishabh Pant, Vijay Shankar and Ajinkya Rahane are all in contention for a World Cup berth, according to India’s chairman of selectors MSK Prasad. In an interview with ESPNcricinfo, Prasad said the selectors have virtually sealed the 15 spots barring the “one odd” position, which would be firmed up before the deadline set by the ICC to pick the final squad.

If Pant is a “healthy headache”, Vijay, who is seen as a batting allrounder, has brought in a new “dimension” to the World Cup selection with his impressive performances in the New Zealand series this month, Prasad said.

“Undoubtedly he (Pant) is in contention,” Prasad said. “A healthy headache. The progression of Rishabh in the last one year is phenomenal across the formats. What we actually felt is he needs a bit of maturity now, gain more experience. That is reason we have included him in India A series wherever possible.”

Pant might have only played three ODIs – all against West Indies in 2018 – but his good form in Test cricket and for India A in the last year has received a positive appraisal from the selectors. Prasad admitted about thinking of Pant as a “thick-skinned” person, but that feeling has now been replaced by that of a young player who is showing maturity at the highest level and commitment to the team’s cause.

Along with Dinesh Karthik, Pant was earlier seen as the back-up wicketkeeper for MS Dhoni. However, with Karthik having settled down in the lower order in the past 12 months, the selectors are now looking if Pant can be included as a specialist batsman.

That position might have opened up also because of the weak form of KL Rahul since the South Africa tour last year across the three formats. In this period, Rahul has just played three ODIs – all during the England tour – and was recently suspended by the BCCI over an off-field controversy. Prasad pointed out that although Rahul was still in the race, he could jump over the competition now only by scoring runs.

In contrast, Vijay has now leapt into contention with a promising display during the T20I series in New Zealand, where he was asked to bat at No. 3 in Virat Kohli’s absence. After India lost the series in Hamilton, the Tamil Nadu allrounder said he was “surprised” to bat at No. 3, where he made a 28-ball 43.

Prasad agreed that Vijay would be the fourth allrounder in the pool of 20 players the selectors have drawn up to then pick the final 15. “In whatever opportunities he has got, Vijay Shankar has shown the skillsets required at this level. We have been grooming him through India A tours in the last two years. But we will have to see where he can fit in the dynamics of this team.”

Until the England tour last year, Rahul was being seen as the third opener by the selectors. With him struggling to find form, the selectors have been forced to look for other options which is possibly why Rahane is once again part of the deliberations.

Although he has not played for India in ODIs since last year’s South Africa tour, Rahane has been consistent in List A cricket this season: 597 runs in 11 innings at an average of 74.62 with two big hundreds and three fifties. Two of those fifties came recently for India A in the unofficial ODI series against England Lions in Thiruvananthapuram last month. However, Rahane’s strike rate during these 11 innings has been 77.83; in not even one of those innings did he score at more than run a ball. It was probably his scoring rate that had seen him being left out of the India ODI side last year.

“In domestic cricket he has been in form,” Prasad said. “He is very much in contention for the World Cup.”

The full ESPNcricinfo interview with MSK Prasad will appear on February 11.