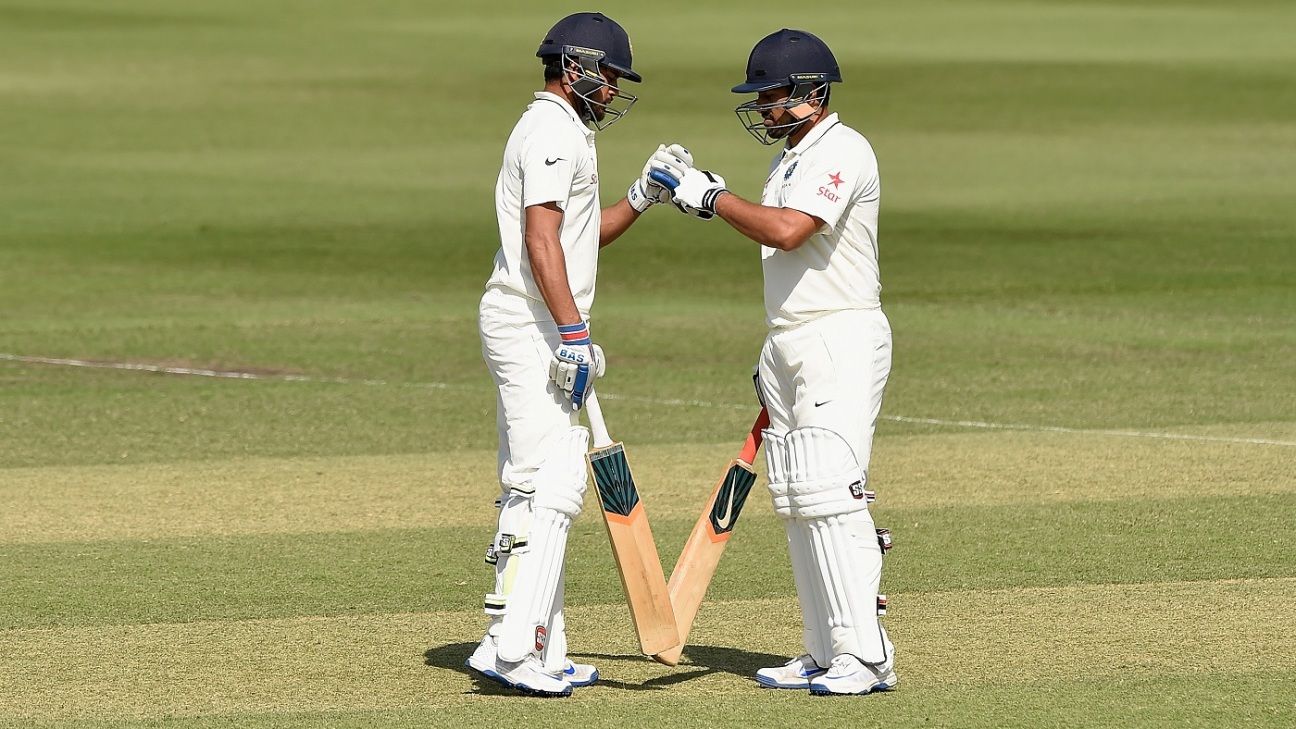 In a tricky chase, against a bowling attack that asked plenty of questions, the class of Manish Pandey and Karun Nair pulled Karnataka through for a six-wicket win on the fourth day of their quarter-final against Rajasthan in the Ranji Trophy 2018-19.

Pandey, the captain, had joined Nair when Karnataka lost nightwatchman Ronit More in the fifth over of the day. Karnataka were 56 for 4, and the target of 184 appeared a long way off. But the duo put on an unbroken 129 runs in just 24.5 overs to seal victory in the first session. Pandey’s first few overs were streaky, with boundaries coming off the inside and outside edges against Tanvir Ul-Haq. But he continued to be positive despite that and his shot-making quickly whittled the target down as the pressure shifted onto Rajasthan’s bowlers. Pandey had another slice of luck on 38, when he swiped a looping legbreak from Rahul Chahar straight to mid-on, but Rahul’s older brother Deepak Chahar spilled the most straightforward of chances. Karnataka were then 119 for 4, and neither batsman offered any chance after that.

Pandey finished on 87 off just 75 balls, while Nair made a more sedate 61 off 129 – only his second half-century of the season.

Rajasthan will rue the dropped catches, but they also had to deal with some questionable umpiring calls. Robin Bist was ruled lbw in the first innings when the ball seemed to strike high on his pads and Mahipal Lomror was given caught behind in the second innings when he didn’t nick the ball. Then during Karnataka’s first innings, Vinay Kumar and More put on 97 for the last wicket from 166 for 9, but two very close lbw shouts against Vinay early in the partnership had been turned down.

Half-centuries from Saurashtra openers Harvik Desai (83*) and Snell Patel (72) ensured their side were in an advantageous position at the end of day four in their quarter-final clash against Uttar Pradesh in Lucknow. Chasing 372, Saurashtra finished the day on 195 for 2.

During their 132-run stand, Snell played the aggressor’s role, while Desai dropped down the anchor. It’s not like the host team didn’t have enough plans but the duo had answers to all of those. When the bowlers pitched it up, they were either driven through covers or flicked through midwicket. Shivam Mavi tried the short stuff but ended up conceding 35 from his first six overs with the batsmen using the pull shot to good effect. Left-arm spinner Saurabh Kumar once again remained wicketless.

However, it was Mavi only who provided the breakthrough, getting Patel caught-behind with a fuller delivery. Vishvaraj Jadeja, once again batting at No. 3, and Desai then added 55 for the second wicket before a sneaky stumping by Upendra Yadav sent Vishvaraj back. The decision was referred to the third umpire who felt Vishvaraj’s back foot, although well behind the batting crease, was in the air for the exact moment when the bails came out of their grooves.

With around nine overs left in the day, Kamlesh Makvana came out as a nightwatchman and ensured there were no further hiccups before bad light forced stumps.

Earlier, Jaydev Unadkat didn’t take long to take the remaining two UP wickets to bowl them out for 194.

Vidarbha put themselves in a winning position against Uttarakhand in Nagpur at the end of the fourth day of their quarter-final. At stumps, Uttarakhand were 152 for 5, still trailing by 122.

Vidarbha’s marathon first innings finally ended on 629, with a lead of 274. Aditya Sarwate resumed from his overnight 57 and became the third Vidarbha batsman to score a hundred. He and Suniket Bingewar added 49 for the eighth wicket but once Sarvate was dismissed, the next two wickets could add only one run to the total. Five Uttarakhand bowlers conceded more than 100 runs.

In response, Vineet Saxena and Karanveer Kaushal gave Uttarakhand a steady start of 72 before Umesh Yadav trapped Saxena lbw for 27. Vaibhav Bhatt failed to open his account and was bowled by Umesh.

Kaushal and Avneesh Sudha added 40 for the third wicket before Sarwate hurt them again, this time with the ball. Kaushal was on 76 before he was bowled by the left-arm spinner. Sudha and Vaibhav Singh Panwar fell in successive overs, leaving their side staring at defeat.

For the hosts, Umesh was the most successful bowler, picking up 3 for 22 from his 11 overs, while Sarwate picked up 2 for 49.