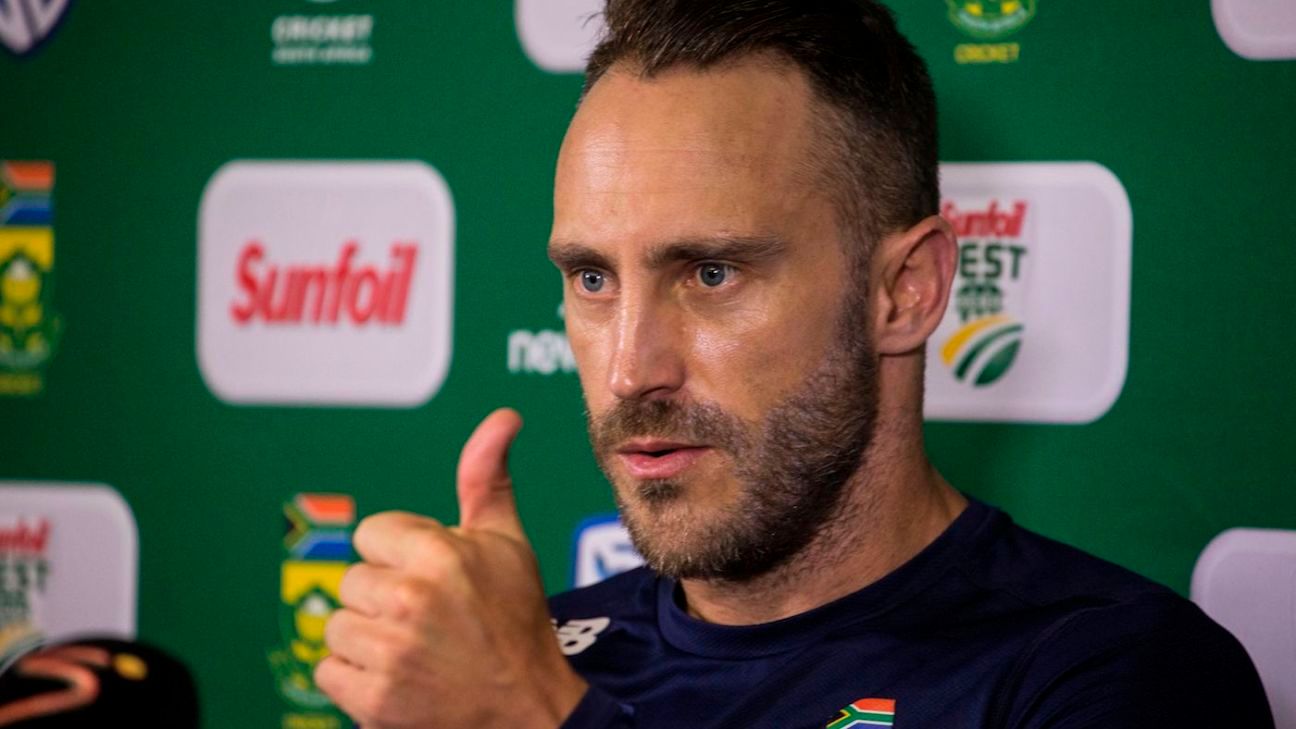 While South Africa look a complete side in Test cricket, the questions over the best XI for their upcoming World Cup campaign loom large over the one-day outfit. Ahead of the first of five ODIs against Pakistan, captain Faf du Plessis hinted at a healthy competition for places in almost every facet of the side.

“We’re a one day side that’s still trying to find that balance in our team,” said du Plessis after South Africa’s training session at St George’s Park. “With Quinny [de Kock] and Dale [Steyn] not here in the first two games, it actually gives us an opportunity to look at what else we need to look at, which is important.”

“Pakistan is a very good one day side and probably they would be the first to say that from a performance point of view, their one-day team is much stronger,” added du Plessis. “It will be a nice challenge for us.”

While South Africa have a somewhat clear eye on who they want in most departments, the jostling for position notwithstanding, one of the more pressing questions – as it affects the balance of the team as a whole – is who will fill the all-rounder’s slot in the lower middle order.

“It’s an answer that I’m hoping to give to you after this series,” said du Plessis. “We’re hoping that over the next 10 games, over the Sri Lanka series as well, all the allrounders that are there in Andile Phehlukwayo, Wiaan Mulder, Chris Morris and Dwaine Pretorius, that you’ll at least have one or two of those guys who really put their hand up and shout to the selectors ‘pick me’.”

Unusually, South Africa also have a surfeit of spin options to look at, with both left and right-handed wristspinner, as well as option of the left-arm orthodox of Keshav Maharaj. Maharaj was part of the one-day squad that toured Sri Lanka last year without the rested Imran Tahir, but with Tahir back and Tabraiz Shamsi included in the squad for the first two ODIs, Maharaj has been forced back to the fringes.

“It is a decision that always comes into it at St George’s Park: do you need one spinner or do you need two spinners?” said du Plessis. “Because it is possibly the ground in the country that can spin the most, if you compare it to the other grounds around the country. It’s also a day/night game, which is possibly something different as well. So there are one or two things we need to consider in terms of the balance of our side.

“But over the next five games, certainly the spinners will have their say. Pakistan is a very good batting team against spin, so it will be a nice challenge for our spinners. I’m hoping over the next 5 or 10 games our two spinners, and we’re very lucky to have two good spinners, will have a good equal opportunity to just keep working on their games and making they’re getting themselves ready for the World Cup.”

Coach Ottis Gibson has spoken of Rassie van der Dussen as a batsman who could slot in almost anywhere in the top six, and du Plessis suggested that van der Dussen’s performance in the Mzansi Super League – where he top-scored with with 469 runs at a strike-rate of 138.75 – had demanded attention from the selectors.

“I was impressed with the one or two games he played in the T20 side, but it was just really hard to fit him into the Australia squad,” du Plessis said of van der Dussen. “There’s a lot of competition for the batters. There are a lot of options available. And then he had a great Mzansi Super League. He’s been knocking on the door very hard, so it’s a great time for him to get an opportunity after all the runs he’s scored.”

Red-hot form was likewise a factor in the selection of seamer Duanne Olivier, who picked up 24 wickets in the three Tests: a South African record against Pakistan. Olivier is just one of a number of back-up seam options South Africa may trial in this series, but like van der Dussen, his eye-catching performances have made him impossible to ignore.

“From a brains trust point of view, we’re always looking at X-factor players in our bowling attack,” said du Plessis. “So Lungi [Ngidi], Dale [Steyn] and KG [Rabada] are fantastic seamers and they pick themselves, but possibly as one back-up extra seamer, we’ve got some nice pace bowlers in our country. Duanne Olivier is one.

Even [Anrich] Nortje who bowled really well in the Mzansi league is someone we’re still looking at. [Dane] Paterson is a different kind of a bowler, he’s more of a swing bowler, but that extra bowler, if something were to happen to one of those bowlers at the world cup, if we had someone with a bit of pace, it would be nice.”