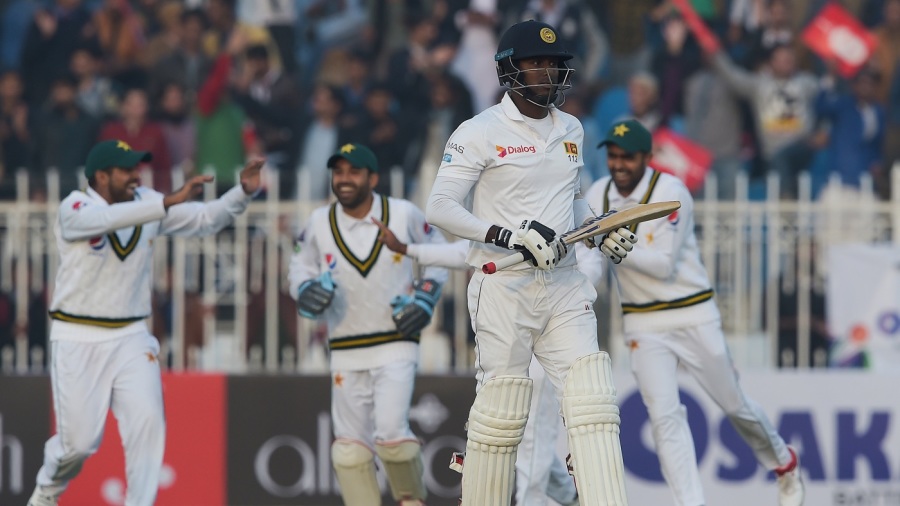 History will record the significance of the day instead of the trivialities contained within it, though that is a shame, as the cricket was really rather good.

On a day where the breaks between sessions appeared to herald official changes in momentum, the ebbs and flows never really allowed either side to walk away claiming more than an equitable share of the spoils. Pakistan will be well pleased to have seen the back of half the Sri Lankan side, especially after a wicketless first session, while Sri Lanka may be content to have put 202 on the board, particularly as getting there appeared far from certain when Pakistan’s all-pace attack – Yasir’s omission adding yet another surprise to Misbah’s burgeoning catalogue – prowled in the post-lunch session.

Even the bitterly cold morning and overnight rain that saw the ground almost completely submerged in the tarpaulin sheets Rawalpindi Ground hasn’t deemed fit to upgrade since the previous century, wouldn’t douse the spirits; people were queuing outside the ground since well before the start of the day’s play. That they managed to get it to start on time was something of an organisational achievement, but Sri Lanka had a big call to make when they won the toss under overcast skies. Dimuth Karunaratne was brave and opted to bat, with makeshift opener Oshada Fernando walking out with him.

Was this young bowling attack caught up in the emotion those first two hours? Either way, the cricket on offer from them was ordinary. Mohammad Abbas was hauled off after three ineffective overs, and the lack of swing on offer would make it easy for the Sri Lankan openers to get settled in while the clouds above cleared. Shaheen Afridi was perhaps guilty of being too greedy, pitching full a shade too often, allowing the left-handers to lean into the drive and keep the scoreboard ticking.

Not that there was no warning of what would happen in after lunch was taken. All three quicker bowlers trapped the Sri Lankan openers in front, but that would only generate excited appeals instead of reviews or wickets. Naseem Shah’s nasty bouncer to Karunaratne was perhaps the event of a somewhat subdued session, the rearing bouncer striking the ducking batsman in the neck, necessitating concussion protocols to be activated. But by the time the final over of the session was bowled by Haris Sohail, Karunaratne had brought up his half-century. Fernando would loft him down the ground for the only six of the day in that over. The 100 partnership was nearing, Sri Lanka’s grip on the game tightening, and Yasir’s absence glaring.

Afridi, Pakistan’s most consistent bowler over the past month, was the first to strike, trapping Karunaratne in front from a straighter delivery, and finally getting the decision in his favour. That galvanised the entire pace attack, each of the bowlers tucking in, eager to get their name among the wickets. Naseem was thrust into a lengthy spell that saw him retain both pace and accuracy, with reverse swing beginning to play its part. It was a bit of extra bounce, though, that outfoxed Fernando, who was pushed onto the back foot and could only edge to first slip. Shinwari joined in shortly after, regularly drawing Mendis into the off-drive, before finally taking the edge.

But the delivery of the day belonged to Abbas, his accuracy rewarding him with a wicket identical to the one every fast bowler visualises in their head a thousand times. Pitching one on middle and off, he found seam movement to shape it away from Dinesh Chandimal to clatter into the top of off stump, the arc of the delivery meaning it did just enough to miss the outside edge and hit off stump instead. That was Abbas at his best, and in that session, Pakistan were at theirs. Sri Lanka had lost four wickets for 30 runs inside 14 overs, and suddenly, the possibility of the tail being exposed by stumps began to appear very real.

But tea, which came at 50 overs – Pakistan’s over rate was far from ideal – would signal an end to that quality of fast bowling once more. From a young attack, that is only expected, and any attack, however experienced, would find it difficult to sustain the sort of brilliance Pakistan managed for a whole session in the middle of the day. It helped Sri Lanka that Angelo Mathews was at the crease, the ideal man to dig in and remove the sting of any bowling attack, and Dhananjaya de Silva was a soothing presence alongside him at the other end.

It spoke to their maturity that neither felt under any pressure even as the first three overs after tea produced not a single run. If that gave the impression Pakistan had picked up where they left off, Sri Lanka would spend the next hour swiftly dispelling that. As soon as the lengths wavered, the batsmen began to capitalize, the shackles broken when de Silva found two boundaries off Shaheen as he went short of a length, with the next five overs producing 41 runs.

If bad light, which – for those who may have forgotten – inevitably plays a part in Test cricket in Pakistan, had forced the players off at any point around then, Sri Lanka would have walked away being able to claim a successful day. But before that, there would be one final twist, as a wide delivery from Naseem saw Mathews go searching for the drive. He only managed the outside edge, and the catch to slips would provide Pakistan a gift they wouldn’t have expected on the evidence of the comfort with which the pair was batting.

Soon after, the 200 was brought up, and as the sun went behind the clouds and the umpires began to get fidgety, Sri Lanka saw their opportunity to walk away and come back tomorrow in less testing conditions. Only 68 overs had been bowled today, but for a crowd that has seen absolutely none for over a decade, even this curtailed day felt like a bonanza.