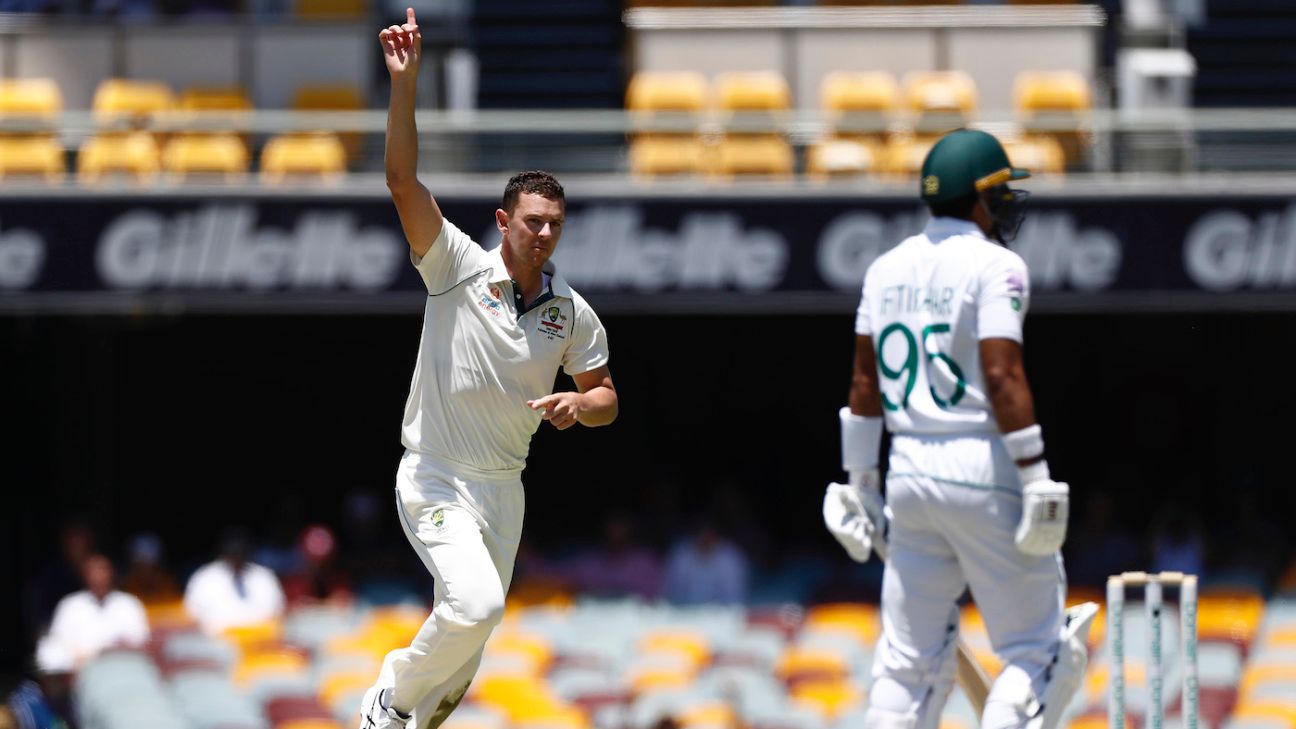 Pakistan captain Azhar Ali will consider changes to his batting line-up in addition to the likely recall of Mohammad Abbas after his side’s defeat to Australia in the first Test, in which the visitors offered up numerous promising phases but still left the Gabba bruised and smarting from an innings defeat.

Haris Sohail looked very much out of his depth at No. 3, allowing the Australians to follow up their first wicket with damaging follow-ups in each innings – a marked contrast to the superb 185 piled on by Marnus Labuschagne at first drop for the hosts. And though Azhar called for calm in assessments of the visiting team, noting how Babar Azam and Mohammad Rizwan had shown the way with sparkling second-innings displays, he conceded that in Australia there was no room for the lapses seen at the Gabba.

“When you play Test cricket in Australia, you cannot afford to go behind as it is very difficult to then catch up,” Azhar said. “The way we won the toss and we played in the first session without losing a wicket, that was an opportunity for us to go in front and take the initiative in the game. That chance we lost in the second session and that made sure we could’t reach the kind of total we needed to put pressure on them.

“Similarly, we failed to create pressure early on with the ball. We couldn’t take wickets with the new ball and couldn’t control the run rate either. But the boys kept fighting in the second innings and also when we bowled on day three. Babar played a great innings and so did Rizwan. Shan [Masood] was batting well too. They were the positives. But the reason we don’t win in Australia is that way too often we get behind in the game early on rather than make the most of the opportunities that come our way.

“The most difficult session was the opening session; it was not easy. But we lost the second session where we lost a lot of wickets in no time. That was a great setback for us. There were soft dismissals, that’s why [we] missed the opportunity to score a big total. After scoring 240, we weren’t able to get wickets with the new ball. The bowlers kept fighting even when their score read 300 for 2. Labuschagne played a brilliant knock. [David] Warner played a great knock.”

Addressing the batting line-up, Azhar reckoned that the post-mortems would possibly result in change, keeping in mind the challenges to be offered up by the pink ball on an Adelaide pitch that will likely feature at least some grass to aid the seam bowlers on both sides.

“Facing the new ball is very important in Australia, and they made full use of it in the second innings. Sometimes you have to give credit to the opposition. They bowled in very good areas last evening,” Azhar said. “But in the first innings, the top order started well but then lost their way in the middle. I still think they are capable, but we have a few days now and we will rethink our strategy for the Adelaide Test.

“We will sit and do a recap of this game and discuss everything and try to figure out the best playing XI for Adelaide. It’s not fair to raise too many questions over our batsmen this early on. At times, a player can have a tough Test but that doesn’t make him a bad player. I have full faith on all the batsmen that they can score runs here. You’ve seen the way Babar batted. Rizwan is a nice addition to the side but the confidence with which he came out and faced the Australian attack [is commendable]. Not scoring runs doesn’t mean you are not capable of doing so.”

As for the visiting bowlers, Azhar said that a lack of experience had been costly when defending a mediocre first-innings total, and also intimated that the extra pressure of a Test match had affected various members of the touring XI. A recall for Abbas may help, but there will also need to be greater presence of mind shown whoever takes the ball – there was a yawning gap in the performances of the tourists against Australia A in Perth, and it was under the spotlight again in Brisbane.

“The young attack has a lot of potential but you can’t buy experience. It’s never easy in a place like Australia,” he said. “They started off little shaky but they came back strongly the next day even though the Australian batsmen were really set. They came back strong and kept bowling in good areas after that. I believe if they manage to do that from the start of the innings, they’ll be a totally different attack after that.

“I think that game [in Perth] was a first-class game and this is a Test. The pressure is different and the pitch condition is different. There we scored 400-plus runs and bowled really well with the new ball. Here we didn’t put up a very big total and we didn’t bowl in the areas that we did against Australia A. The execution was not there. But again, I still feel there is potential there and we have to obviously do those things well to create problems for the opposition.”