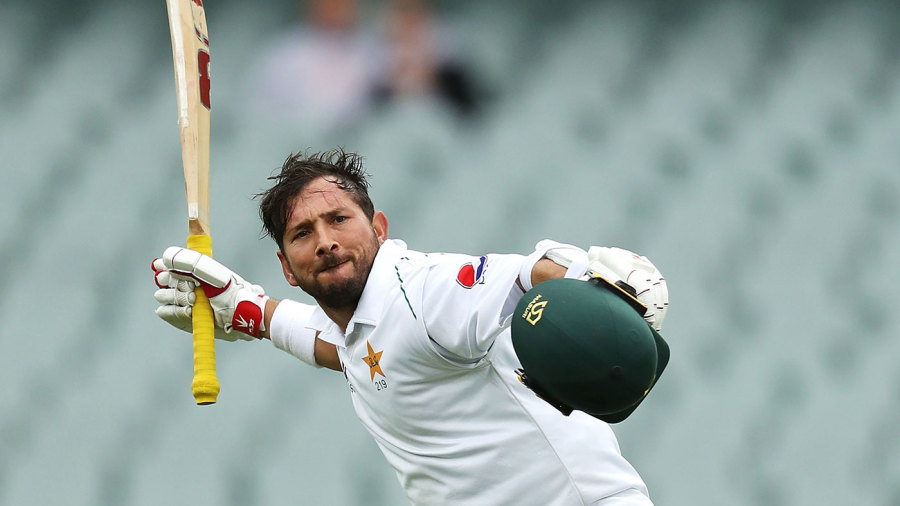 Pakistan ended the third day needing 248 more runs simply to avoid an innings defeat, with the scorecard reading 3 for 39. However, they arguably won the day, and unarguably enjoyed their best one all tour as Yasir Shah produced one of the more unexpected Test centuries.

That there’s no contradiction in those statements tells you much about how the previous two days might have gone. With Pakistan having bowled – and then batted – themselves out of any prospect of winning or probably drawing, they emerged unburdened from expectations and, for the first time, made Australia work for their wickets. Babar Azam agonisingly missed out on back-to-back hundreds by three runs, with the standing ovation the Adelaide Oval gave him suggesting they wouldn’t have begrudged him getting there.

But for the faithful in Pakistan who rose early on a Sunday morning, the reward would come in the form of a deliciously insouciant maiden first-class century from Yasir, whose assured strokeplay did little to flatter his team-mates already back in the pavilion. Partnerships with Azam and Mohammad Abbas took Pakistan up to 300 in their first innings, before much of that good work was undone by yet another top-order capitulation. Imam-ul-Haq, Azhar Ali and, most damagingly, Azam had all been dismissed in a rain-interrupted final session that keeps Pakistan on life support for one more day.

The pitch appeared to have flattened out significantly from the previous evening, any hint of lateral movement having disappeared. Azam and Yasir found themselves more confident when driving on the up with little variable bounce to concern them. There was, perhaps, less intensity in the field from Australia, and an expectation (not exactly unreasonable) that Pakistan would just give up their wickets tamely. But Azam was digging in, as he always does, while Yasir had quickly realised batting here was much more fun than bowling, and determined to be remember in this game for all the right reasons.

There was fortuitousness for the legspinner; he was missed on no less than three occasions – on 35 (a stumping), 43 (a dolly of a caught-and-bowled to Marnus Labuschagne) and 106 (another simple chance to Labuschagne at short leg) – while Steven Smith’s position at slip to Nathan Lyon meant a couple of potential chances fell short. But just when Azam began to take on Labuschagne and move inexorably towards three figures, one lapse in concentration would cost him. Mitchell Starc angled one across and Azam drove on the up, only to get an edge that would see Tim Paine take a sharp diving catch. In denying Azam his milestone, Starc got his: a five-wicket haul that would become six the very next delivery when he pinned Shaheen Afridi lbw.

However, instead of folding, Abbas had some scores to settle, too. The sort of unfashionable patience and grit he reserves for his bowling came in handy with the bat as the scoreboard ticked over. Even as the new ball was taken, Abbas held firm, ensuring Yasir would be allowed to complete a remarkably unlikely century in a ninth-wicket stand of 87. Yasir looked for all the world to have scooped one to mid-on when one run short, but the ball went over, and Yasir roared exultantly.

Much of the day had been dominated by speculation of when exactly it would rain and whether it would impact Paine’s decision to enforce the follow-on. With Pakistan having hung around longer than anticipated, Australia were expected to bat again, but with the evening session under lights looming Paine put Pakistan back in for a tricky four overs before the dinner break.

It was too long for Imam, who failed to keep out a Josh Hazlewood inswinger on his ninth delivery. When Azhar nicked off to second slip soon after, moments before a cloudburst forced everyone off the field, the feel-good factor that had accompanied the wagging of the tail had long since evaporated.

The rain came and went for much of that final session, but there was still time to deal the heaviest body blow to the solar plexus of the Pakistan line-up. It takes an exceptionally good delivery to leave Azam flat-footed, but that’s exactly what Hazlewood delivered with his slightly short length around off stump that drew the edge.

Azam would be forced to trudge off for 8, the sixth time Hazlewood had dismissed him at the cost of just 69 runs. It might have been the cue for the rest of the side to begin packing their suitcases, but the rain ensured there is at least one more day before another sorry chapter can be added to the miserable book that chronicles Pakistan’s tours to Australia over the past quarter century.