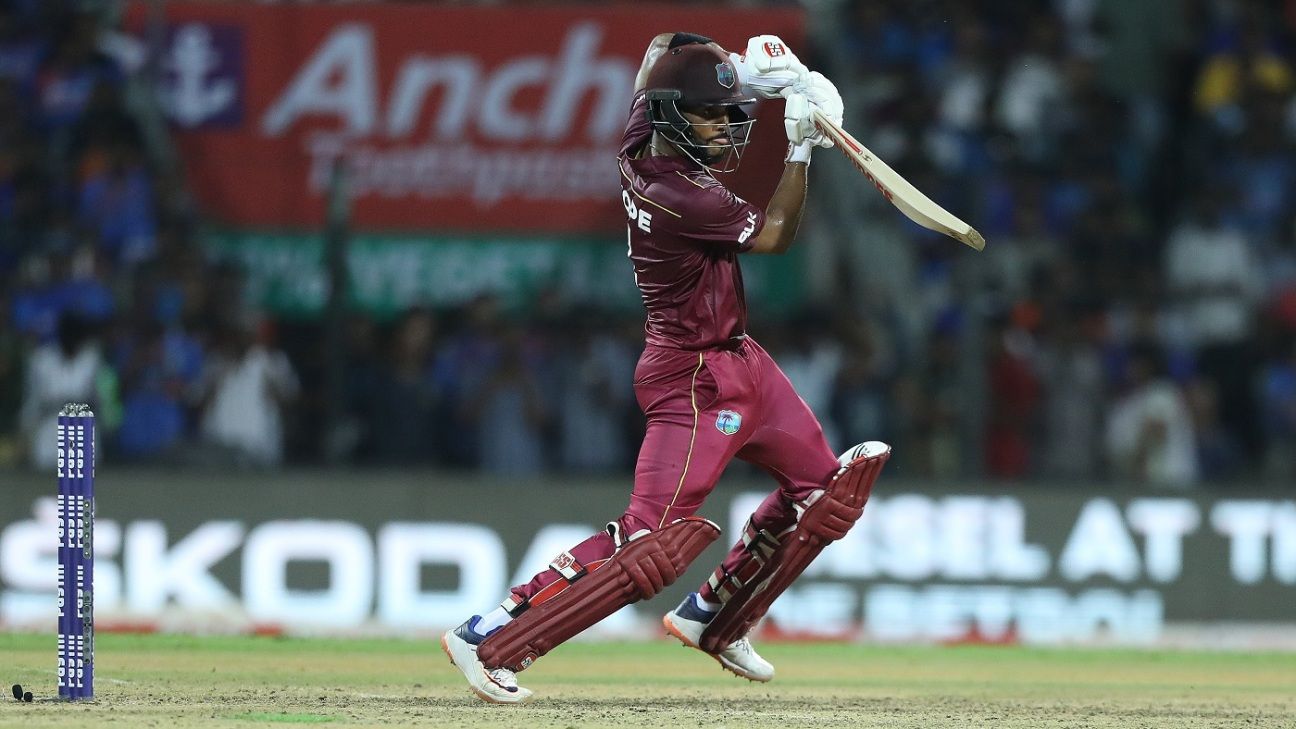 There’s an air of serenity around Shai Hope. In a West Indies side filled with six-hitters, the 26-year-old wicketkeeper-opener constructs his innings with singles and doubles, 1990s-style, and lets the batsman at the other end enjoy most of the spotlight. He has been in tremendous form in ODI cricket, averaging nearly 64 in 42 innings since the start of 2018, but this strike-rate in this period has been only 75.97.

For a large part of his hundred in Chennai in the ODI series opener against India on Sunday, his strike rate was hovering around fifty. But, with Shimron Hetmyer rattling along at a strike rate in the 130s at the other end, Hope just had to do his thing: bat through the innings at his own pace.

Hope had batted through the chase in the third ODI against Afghanistan in Lucknow last month too, his unbeaten 109 off 145 balls sealing West Indies’ 3-0 sweep.

“I’m pacing my innings to my team’s requirement,” Hope said on the eve of the second ODI in Visakhapatnam. “Say when you have to chase only 280, we have to make sure everyone’s on the same page. My role is to stay at one end, knock around the bowlers, and not give them any wickets. And it’s about doing what the team requires. That’s my role in the team. If the chase requires me to step it up, I can do that. So I just hope to play what the team requires.”

In isolation, 2019 has been a banner year for Hope in limited-overs cricket. He made his World Cup bow for West Indies and then played a crucial hand in their winning their first ODI series in more than five years, against Afghanistan, before playing his part in West Indies going 1-0 up in Chennai. In May, in the lead-up to the World Cup, Hope had cracked a career-best 170 against Ireland, in a 365-run stand with John Campbell – the biggest first-wicket stand in ODI history.

Hope (1225) is currently the third-highest run-getter in ODIs this year, behind the India pair of Virat Kohli (1292) and Rohit Sharma (1268). Does he see himself climbing to the top by the end of this three-match series?

“Obviously, you need the bowlers to do some damage as well,” Hope said. “As a batsman, you want to score as many runs as possible and contribute to team wins. That makes it even more satisfying. So, hopefully we can get some early strikes and get the two of them [Kohli and Rohit]. And hopefully, I can get some big runs and go on top of the list.”

ALSO READ: Smart and on target, Cottrell is more than just the salute

Hope sustained a finger injury during the Test series against India at home and missed a major chunk of CPL 2019. He, however, returned to action at the fag end of the tournament and won the CPL title with Barbados Tridents. Hope also proved his fitness in international cricket, keeping for 50 overs and then seeing off chases against both Afghanistan and India.

“It’s a tough job and it takes a lot on the body,” Hope said of his dual role. “And I just need to remind myself that I’m playing for the entire Caribbean and everyone supporting us. So, just finding my motivation and doing whatever I can to get the team over the line. So, if I have to keep 100 overs and then go out and bat, I’m going to do that.”

Hope is part of the IPL 2020 auction list, as are several of his team-mates. When asked whether strong performances in the second ODI – scheduled to take place a day before the auction – would boost their chances of getting picked, Hope dead-batted the question. Instead, Hope said West Indies’ immediate focus was on winning the series against India.

“I’m sure that [doing well] would [help IPL selection], but that’s secondary,” he said. “We came here to play the series against India, to win a series against India. So, what comes secondary is secondary. I’m sure some of the guys will be looking forward to the auction, but we have the India series to play, and that’s the main thing right now.”