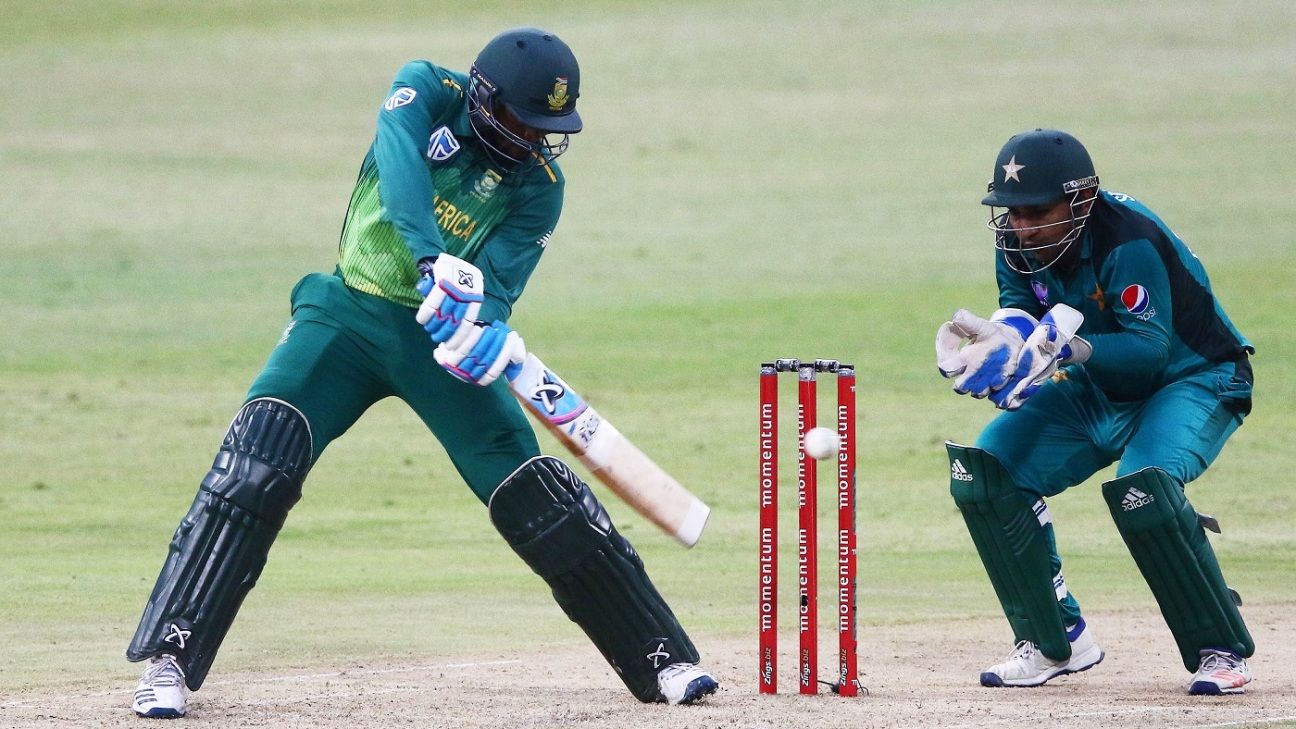 Sarfaraz Ahmed is unhappy that his on-field remarks to Andile Phehlukwayo were turned into “a bigger deal than it was”. Addressing the press for the first time since returning to Pakistan after the ICC imposed a four-match ban on him, Sarfaraz claimed that Phehlukwayo had not considered his remarks racist, and was more offended at what he initially perceived as a comment about his mother.

“When I went to say sorry to Andile for using the word [kaale, meaning ‘black’], he was more offended by my reference to his mother, saying I had used inappropriate language about her,” Sarfaraz said in Karachi. “In the media, the word ‘black’ was highlighted to suggest that I had said a racist thing, but I explained the context to him.

“I’m sitting here as Pakistan captain – and for that matter any player playing for Pakistan – thanks to the prayers of their mothers. So I explained I used the world black, which I apologise for, but I insisted I had not said anything offensive about his mother.

“Then we gave him an example from our Islamic tradition, and their team manager [Mohammed] Moosajee [also a Muslim] agreed with what I was saying. So the whole controversy was created by the word, and if people had looked at the context, there was nothing in it. It was just that word, and as you know in our society, it sometimes gets inadvertently used. So yes, I made a mistake, and that was that.

“I just want to make it clear that a huge issue was created out of one word. I never wanted to say something racist to him or taunt him in that way.”

The incident in question took place during the 37th over of South Africa’s chase in the second ODI in Durban. Sarfaraz was clearly heard on the stump mic telling Phehlukwayo in Urdu: “Abey kaale, teri ammi aaj kahaan baitheen hain? Kya padhwa ke aaye hai aaj?” Literally translated, that means: “Hey, black guy, where’s your mother sitting today? What [prayer] have you got her to say for you today?”

“If I had come back with the team and got just three days here before going for the PSL, that would have been very hectic. So getting the rest instead was much better”

Phehlukwayo had indeed enjoyed some good fortune after having arrived at the crease with South Africa in the mire at 80 for five. He went on to remain unbeaten on 69, helping South Africa win the game and taking home the man-of-the-match award. Sarfaraz issued an apology on Twitter soon after, addressing no one in particular but “to any person who may have taken offence from my expression of frustration”.

The ICC then launched an investigation into the remark, even as Sarfaraz met Phehlukwayo in person, posting a photograph of the pair shaking hands and thanking the South African for “graciously accepting” his apology.

ALSO READ: How to apologise: a primer for cricketers

He was, however, banned for the last two ODIs of the series, which South Africa went on to win 3-2, and the first two matches of the subsequent T20I series.

Shoaib Malik has since been installed as the stand-in captain, and with increasing speculation about Pakistan’s captain at the World Cup, the Pakistan Cricket Board has had to clarify that it would be appointing captains on a “series-by-series basis” – perhaps not the ringing endorsement the captain of two years expected.

Sarfaraz, however, said there was no rift between him and Malik, and the players were happy with whoever the captain was.

“There is no truth to the claim people who play under Shoaib bhai don’t want to play under me. All the boys are very good and support each other. I don’t think there’s anything about that,” he said.

“I’m hopeful and expectant of a comeback. I came back because I had a four-match ban, and there was just one more match after that. So travelling with the team all that while and not playing, what with me having been away from home for five months, was very hectic. If I had come back with the team and got just three days here before going for the PSL [Pakistan Super League], that would have been very hectic. So getting the rest instead was much better.”

Asked for his reaction on the PCB expressing disappointment at his ban and saying that it would pursue the matter with the ICC “with the objective to bring reforms to the code”, Sarfaraz chose not to be drawn into the discussion. “The PCB knows what stance to best take. I had made a mistake and so I admitted to it,” he said.