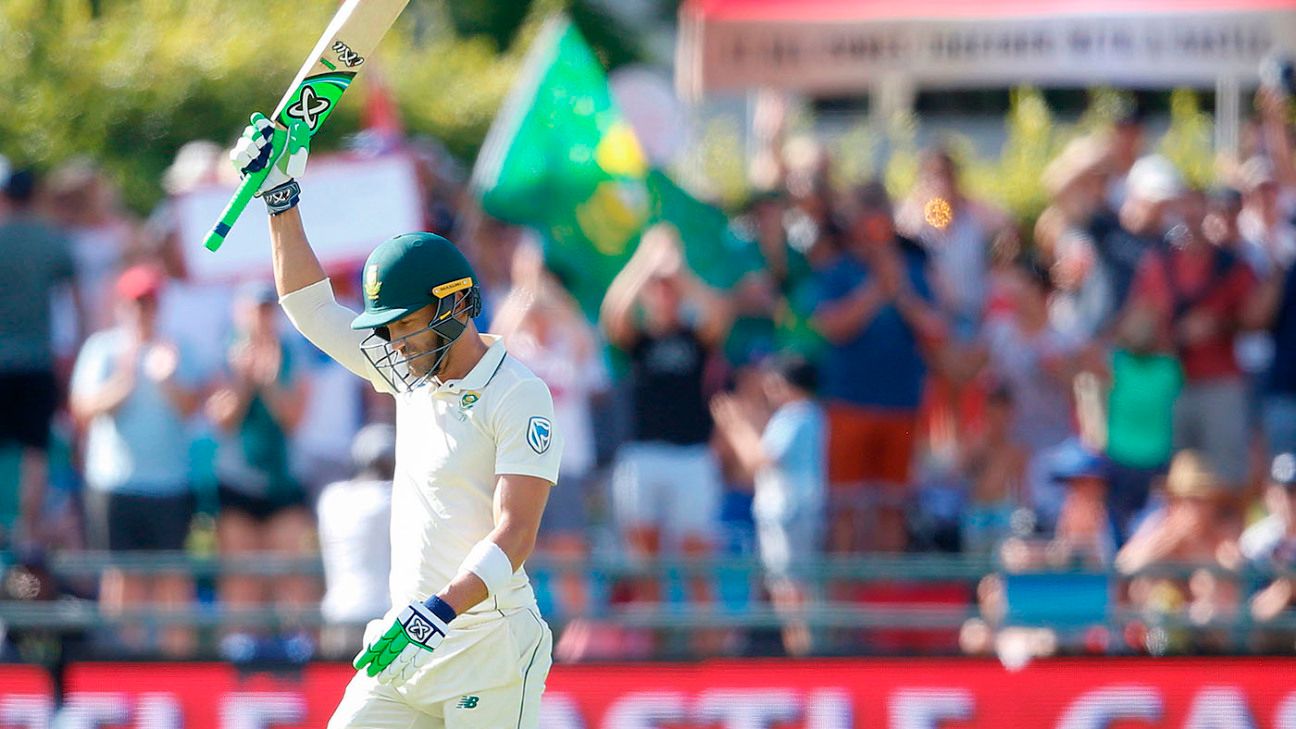 South Africa’s bowlers dominated headlines in 2018 and helped to make home a fortress, but on the second day at Newlands, the batsmen finally had their day in the sun. Aiden Markram kicked things off with a fluid 78 on Thursday, Temba Bavuma struck 75 to continue the good form he showed at Centurion, Faf du Plessis cracked his ninth Test ton – and first at Newlands, and Quinton de Kock played the No. 7 role to perfection, rapidly increasing South Africa’s advantage with a free-flowing fifty.

There was some talk ahead of this series of Hashim Amla’s powers being on the wane, but Amla is not the only member of South Africa’s squad who struggled to find the middle of his bat in Tests in 2018. Du Plessis had a challenging year, averaging just 24.36 (over two runs less than Amla), while Markram scored his Test runs at a shade over 33, and Dean Elgar managed 36.72. Bringing up the rear, de Kock contributed his runs at just 21.77 last year. Those don’t appear to be the sort of numbers to set the Test world alight with. But, thanks to the bowlers, they were more than enough to better both India and Australia. If your bowlers are winning matches, does it really matter if the batsmen don’t score?

“In a perfect world, everyone’s scoring hundreds, everyone is doing really well,” du Plessis explained ahead of this Test. “But our success rate in home conditions the last three years has been at a very, very high percentage. And that’s meant it’s been a little bit tough on the batters at home. [That’s how it will be] when you’re playing against quality seam attacks, which most teams have around the world now.

“India was here, they have a great seam attack, Australia were here with a great attack, and now Pakistan. The numbers from the batters will drop a bit, but for me, and the coach, we’re okay with that. We’re okay with looking at winning cricket. Our focus is to win as often as we can, and statistically that is the case at the moment.”

Indeed it is – in the last three years, South Africa have won 14 out of 19 home Tests, losing just three times.

South Africa have what they believe to be the best Test attack in world cricket, and a look at the numbers makes that suggestion hard to counter. Conditions here undoubtedly help. At home, they play on pitches that usually offer pace, bounce and movement, and after his working over in the first Test against Pakistan, Dean Elgar called South Africa “definitely the toughest place in the world to bat”. He had the bruises to prove it.

“It is tough,” agreed du Plessis. “I can promise you it’s not just tough for them. It’s tough on the captain as well. I also want to be scoring hundreds and averaging fifty. But it’s a good mindset in our changing room. We speak about that, and it’s something that we’re ok with. And I think you can look at our openers as examples. They are guys that front up to tough conditions all season round. And I think what makes us that little bit different to other teams is that we are okay with it. If it means failure, as long as we’re winning, then the team does buy into it.

“But it is tough on young guys making their mark, playing on wickets that are a little bit spicy. And then you go overseas and you play in the subcontinent, where the ball probably spins from day one. So it’s tough at the moment for guys, but as with the captain, they just want to win games of Test cricket. They’re very happy. If we’re winning, everyone stays in the team.”

Bavuma is one of the young players making his mark whom du Plessis may have been thinking about, but temperament and technique have made him the pick of South Africa’s batsmen in this series. Those characteristics have also meant he has prospered even as others have struggled. He averaged 42.14 in 2018, his best year since his debut in 2014.

It has been three years, almost to the day, since he scored his maiden Test hundred at this very ground against England. Bavuma came close to a second Test ton before he ran out of partners against Australia at the Wanderers last March, but that difficult second ton continues to evade him. Be that as it may, he has now played two vital hands in two Tests, clawing the ascendancy back with his fifty at Centurion, and putting South Africa well ahead with his 75 here, sharing a 156-run stand with his captain. A ton missed, but job done.

“If I look at the positive, it’s that I managed to get the team into a strong position,” Bavuma said. “I try not to focus too much on my personal ambitions and milestones. As long as I’m contributing to the cause of the team, the guys are happy with my commitment and efforts, I can also sleep with a smile on my face.”

Bavuma also reiterated du Plessis’ thoughts about seam-friendly conditions in South Africa. “Everyone is using conditions to their advantage, and I don’t think we should do any different,” he said. “We’re playing at home. We know how to play at home. We’ve got a strong quartet of fast bowlers, and we want to give them everything possible to be at their best.

Bavuma cashed in after a close call with the catch that wasn’t, and the judicious use of a review after he had been given out lbw, before he, like du Plessis, was eventually undone by a steepler from Shaheen Afridi. But de Kock swished his way to fifty from 59 balls, extending South Africa’s lead to 205 runs at stumps. In the coming days, South Africa’s bowlers will be the ones to, in all likelihood, seal the Test and the series, but the sunny second day at Newlands was all about the batsmen for once.