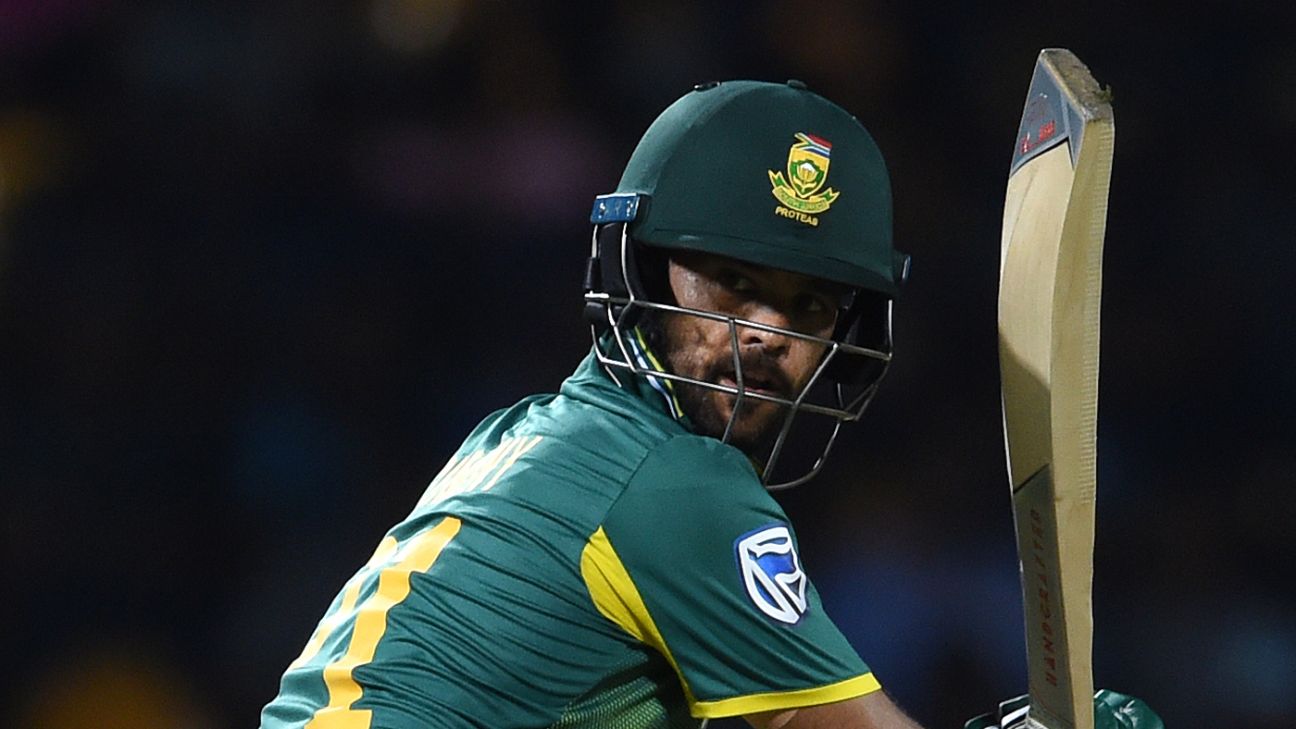 Four-and-a-half months of recovery from a shoulder injury cut short JP Duminy‘s involvement with South Africa this season, but it also gave him the chance to reflect and gain some perspective. Duminy turns 35 in a month, and he has indicated that his desire to spend more time with his growing family was at the root of his decision to retire from ODI cricket after the World Cup.

ALSO READ: Duminy to retire from ODIs after 2019 World Cup

“With the break, with the shoulder surgery, I had a lot of time to reflect on where I want to go in my career and what’s important to me in the immediate future,” Duminy said the day before South Africa’s fifth and final ODI against Sri Lanka at Newlands. “My family becomes a big part of that. I have two growing children and I want to be a present father. I’ve seen the difference it makes, being at home.

“I’ve had an illustrious opportunity in my international career, and it’s been a massive privilege to be part of the green and gold for so many years. But I’ve just got to that point from an appetite point of view for international cricket and the demands it has on a daily basis, it’s come to the end.”

Duminy looked back on a couple of highlights in an international career that stretches back as far as 2004, when he made an inauspicious debut batting at No. 8 in South Africa’s one-day side, before establishing himself a couple of years later. He pointed to South Africa’s historic series victory in Australia 2008, during which he made his Test debut, as well as being part of the first South African win in Sri Lanka, as standout moments for him in the Test arena, while in ODIs, “I think the hat-trick in the 2015 World Cup definitely stands out,” he said.

It hasn’t all been easy, and Duminy added that “being part of the team when Mark Boucher got injured with his eye in 2012, that was a tough time for the team to deal with”.

“But it’s the journey that one remembers,” he added. “It’s not necessarily the start or the finish. It’s the journey that you thoroughly enjoy. The friendships that you make over the years, not only internationally, but playing in tournaments around the world and forming relationships and friendships with different players across the board has been a huge privilege. I know it’s not the final curtain, but it’s a chapter that is going to be closing pretty soon. But a huge privilege, and one that I will always be grateful for. This team that I’ve represented for so many years, the Protea fire that we’ve formed, the bond and the culture that’s been formed within this group has been an amazing honour to be part of, and to be part of that journey.”

Duminy was at pains to point out that he will continue to play T20 cricket – both for Cape Cobras, as well as South Africa – and said that he still has “massive aspirations” to be part of South Africa’s World Cup squad.

If he does make the trip – the squad has not been announced yet, and there are no guarantees – this will be Duminy’s third World Cup, and one that will hold a particular significance for him as a coda to his ODI career. “It feels like there’s something more to this World Cup. I think it’s because it’s my last and you can see the finish line. So there’s a greater cause to it, a bigger purpose to it, and that’s what brings the most excitement out of it,” he said.

Duminy also suggested that, under the leadership of Faf du Plessis, South Africa will head to the 2019 World Cup with a much more relaxed mindset than has been the case in previous tournaments, where South Africa have often been pre-tournament favourites but have also (in)famously floundered in crunch games.

“I do think there is a slight change in the mindset that we’re going to this World Cup with, particularly under Faf’s guard. We’re going with a more relaxed feel. It’s not that it’s an easy way out, by any means. It’s more just a case that we’re going there to give our best. At the end of the day, that’s all we can do. There’s no guarantees of what success looks like to the general public, or to us,” Duminy said.

“We’re going there with a mindset of, we’re going to have fun. We’re going to give our best, whether it’s in our practices, in gym, on the cricket field when we’re playing, individually putting in personal performances. Nothing is going to be taken away from us in terms of what we’re going to put out there. But it doesn’t guarantee anything. That’s the beauty of this tournament. Yes, you can go as favourites, you can go as ranked No. 8 in the world, and it’s about what you produce on the day.”

Duminy isn’t the only iconic South African player who will be calling time on his ODI career after the tournament. Imran Tahir has also announced that he will retire from ODIs after the tournament, while Dale Steyn might also narrow his focus to Test cricket, and Hashim Amla is nearing the end of his international career too. South Africa are about to enter a period of transition as the guard is changed and the younger generation rises to the fore, and Duminy is excited about what the future might hold.

“There’s going to be a transition period, no doubt,” he said. “There might be a few other transitional phases that South African cricket will go through, but I think we’ll be stronger for it. We’ve seen that the game of cricket carries on. No player is bigger than the game, or bigger than the team. The state and the health of South African cricket is in a good place. There are some good cricketers coming through.

“Yes, that transition can be one where there’s a bit of an up and down period, we don’t know how that’s going to play out. But I think the stock that we possess as a South African cricket fraternity is really good, and we’re going to be stronger for it. There’s some exciting cricketers coming through, who I personally believe are going to represent South Africa for a number of years, so I’m quite excited to see what the future holds.”