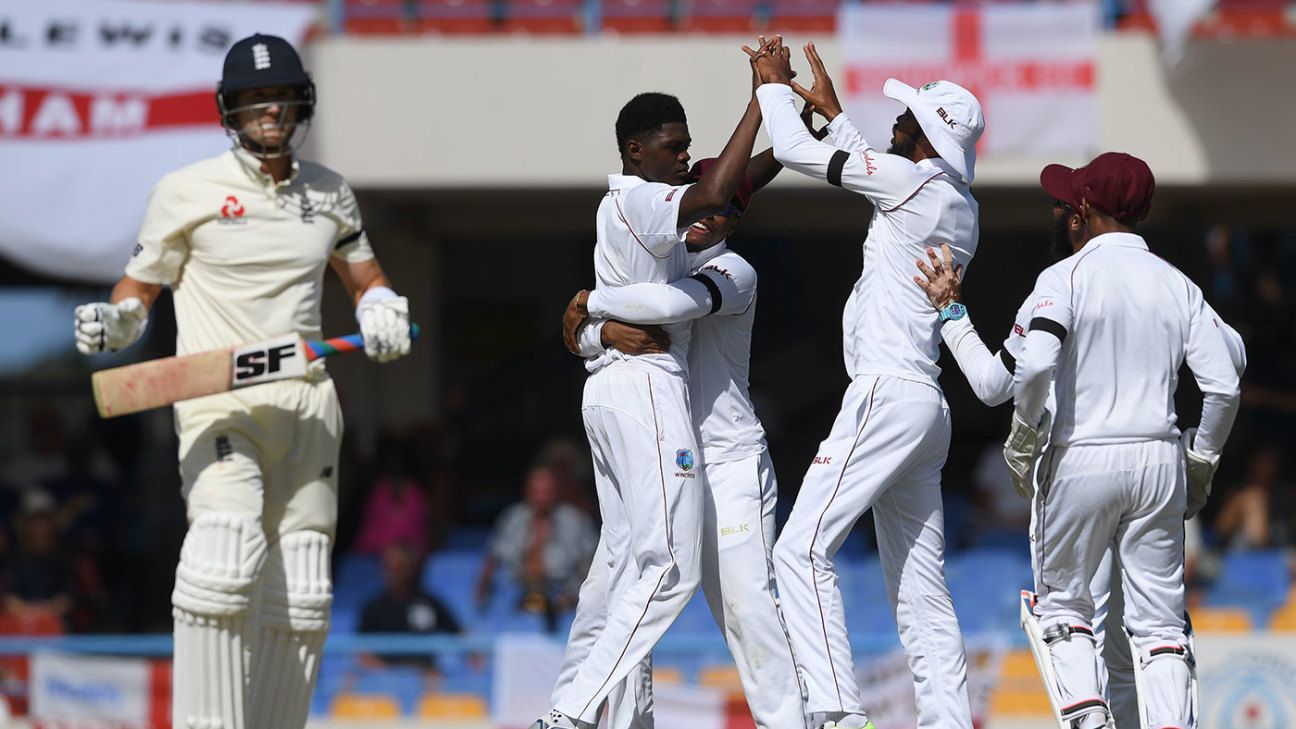 Trevor Bayliss, the England coach, has admitted that the Test team’s batting may have become “muddled” by the demands for extra aggression in one-day cricket. England were bowled out for 187 and 132 in Antigua, having mustered just 77 in their first innings in Barbados, to give West Indies an unassailable 2-0 lead in the three-Tests series, with Bayliss also concerned by the lack of batsmen pushing for inclusion via performances in county cricket.

While England have enjoyed an ODI renaissance under Bayliss, rising to the No.1 ranking and being considered among the favourites for this year’s World Cup, their Test form has been stop-start. They had won eight Tests out of nine coming into the Caribbean tour, largely overcoming some indifferent batting through good bowling displays, but proved no match for West Indies as familiar failings were exposed at the top of the order.

England’s top score in the series is currently 246 – having been set 628 to win in Barbados – and they have come to rely on lower-order heroics to bail out the side. Since the start of 2018, only four times have England passed 350, and only once have they gone on to reach 400 (although they declared on 396 for 7 against India at Lord’s, and 322 for 6 against Sri Lanka in Galle).

In Antigua, England chose to make a change at opener, dropping Keaton Jennings after his second run in the side with only limited success. His replacement, Joe Denly, had not opened in the Championship since 2015 but became the 14th man to be tried in the role in Tests since Andrew Strauss’ retirement; Denly battled manfully on a pitch receptive to seaming bowling but could only produce scores of 6 and 17.

“One of the things we’d like to see is plenty of guys in county cricket putting pressure on those blokes,” Bayliss said. “The guys we have tried at the top of the order over the last few years have been the best players in county cricket.

“From a middle-order point of view, we’ve probably got the best players in England, but they’re not being pushed from behind either. Yes, we’re looking for some top-order players to do well, and we have been for a while. But there doesn’t seem to be the ready-made international player who’s made plenty of runs and has the game that can succeed at international level. The best pressure is from within, pushing individuals to do better.”

While the attacking mindset of Eoin Morgan’s ODI team was credited in some quarters for the successful approach adopted by England in Sri Lanka last year, where they won 3-0, Bayliss admitted the message could have been “misinterpreted”. Of England’s top seven in Antigua, only Rory Burns was not involved in the limited-overs leg of the Sri Lanka tour.

“We’ve got the one-day team that goes out and plays that way, sometimes I feel the message between one-day cricket and Test cricket gets muddled a little,” he said. “But certainly within the team there hasn’t been a lack of talking about. We’ve got to do the hard yards. That’s been the chat the whole time. You’ve got to play your game and if that means doing hard yards, boys talk about earning the right. If they’re bowling well early and there’s a bit in the deck, get through that tough period. The longer you bat, the runs do start to come.”

Bayliss suggested there had been hard words in the dressing room in Barbados, after which he called for more “guts and determination” from the players. This time, he said, the management had “posed some questions” to the team, while offering some mitigation for the difficult nature of the pitch in Antigua.

“They were certainly very down yesterday, probably more so than even in Barbados. I think there’s some fairly deep thoughts going on, not just individually but in small groups. We want to get to the root of why we haven’t played as well as we’d like. You can’t dwell on things too much so it affects you in your next performance as well. These guys in the past have been very good at coming out of these types of performances, and it’s usually when they’ve gone out and backed themselves to play their way. Not be confused on what’s the best way for them.

“We’re having a bit of an informal chat this afternoon. We posed some questions to them last night in the changing room, given them 24 hours to have a think about it. It won’t be me standing up in front of them like a schoolteacher. Maybe around the pool or something like that. Just having a chat, trying to get to what they think they might have to change or do a little differently.

“There’s been some poor shot selection, loose shots. I’d refrain from saying soft. There’s some guys in there that have played some very tough cricket in tough conditions and done very well. On this occasion, there were some loose shots, and on this type of wicket I think some were loose, some were tentative.”

England have one last chance to try and rectify some of the shortcomings in their Test batting before switching into World Cup build-up mode, with the third Test in St Lucia starting on Saturday. Acknowledging that it is a “big year ahead”, with the Ashes to follow later in the summer, Bayliss was hopeful that a bad start to 2019 would not colour attempts to secure a first global 50-over trophy on home soil – a target that has been in mind since the Australian was hired in 2015.

“There’s no denying that any defeat is not good. It’s how you come back from it. Obviously we didn’t come back too well in this game. It’s a concern when you’re losing. It’s a big year ahead. Having said that, the one-day team is a little different to the Test team. They go about it in a slightly different fashion, different captain. I’d have to say it’s a concern, let’s see how they respond.

“That was a concern from a management point of view over the last two or three years when we were starting to plan for a home World Cup. Could we handle the pressure of a home World Cup? That’s why over the last couple years at every opportunity we’ve tried to say that, if we are the favourites playing at home, get them used to that and playing under that pressure.

“I think they are more confident with how to play the one-day game than the Test game. They are still coming to terms and trying to work out what is the best way to play Test cricket but in one-day cricket they are very confident in the way the go about it.”