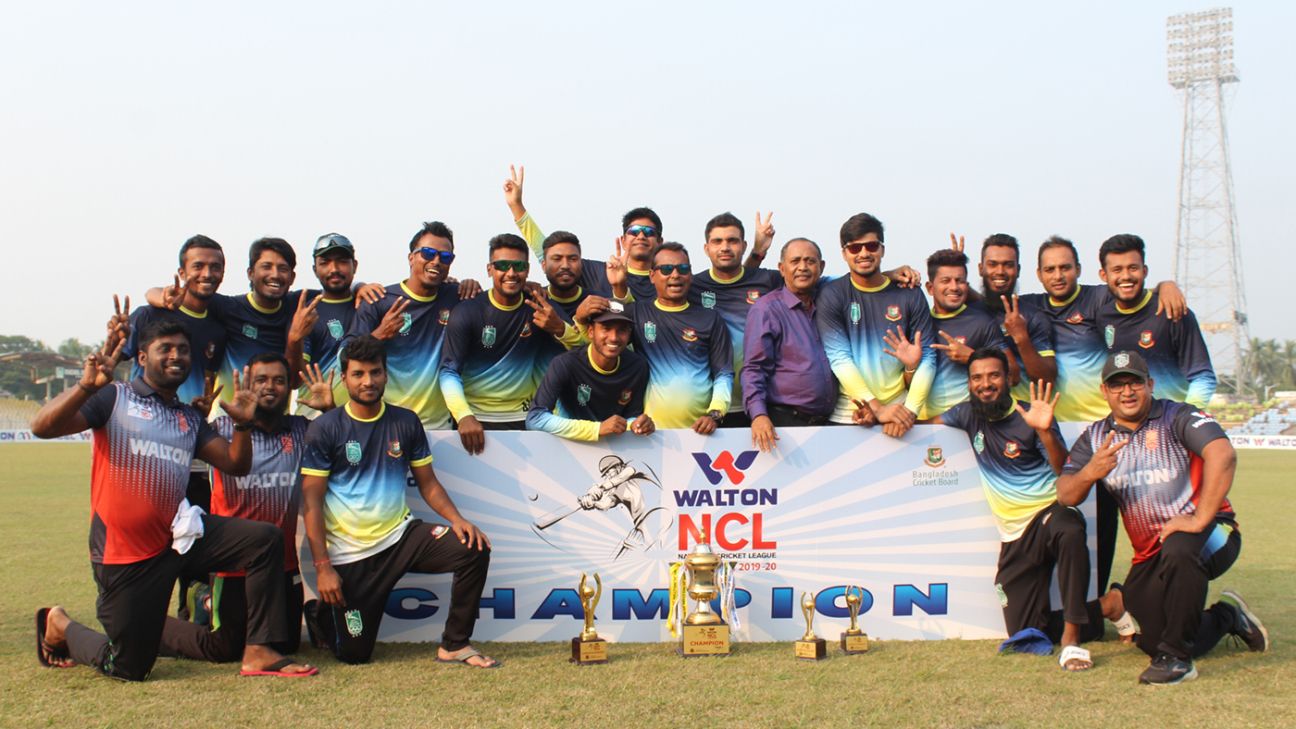 Khulna Division’s nine-wicket win over Dhaka Division helped them clinch the 2019-20 NCL title. Last season’s winners Rajshahi Division, meanwhile, were relegated to Tier-2, while Sylhet Division surged with three wins to earn promotion to next season’s Tier-1. Khulna’s title this year is their seventh overall in championship history, helping them pull ahead of Rajshahi who have won the NCL six times.

In reply to Dhaka’s first-innings total of 279, Khulna’s stand-in captain Nurul Hasan made an unbeaten 150 off 227 balls with 13 fours and seven sixes, his eighth first-class ton. His 143-run fourth-wicket stand with Tushar Imran, who made 82, was a pivotal moment in the game as it helped Khulna take a 100-run lead.

Earlier, Taibur Rahman had struck seven fours and three sixes in his 110 off 189 balls for Dhaka, which was his seventh first-class century. Raqibul Hasan, meanwhile, missed out on a second-innings ton after falling for 99, having struck four fours and three sixes in his 227-ball knock. Khulna then rode on Anamul Haque‘s quickfire 79 not-out to reach their target in the 26th over, and complete their title win.

Rangpur Division‘s Sohrawordi Shuvo made an enterprising 105 off 217 balls – his fifth first-class century – with fifteen fours, which helped his side post a competitive total of 274 runs in the first innings against Rajshahi Division.

Barisal Division‘s No. 3 batsman Fazle Mahmud hammered 141 off 168 against Dhaka Metropolisballs, clubbing ten fours and eight sixes along the way. He followed it up with 75 in the second dig.

In the high-scoring encounter, Shamsur Rahman made 103 off 219 balls while Marshall Ayub struck 109 off 170 balls as the pair added 187 for the third wicket for Dhaka Metropolis. Al-Amin, though, fell eight runs short of a ton.

On-song with the ball

Sylhet have found a new bowling star in left-arm pace bowler Ruyel Miah, who, playing only his third first-class game, finished with match figures of 13 for 65 against Chittagong Division, including an eight-wicket haul in the first innings. These are now the best bowling figures for a pace bowler in Bangladesh’s domestic cricket, surpassing Al-Amin Hossain’s 12 for 89 in 2011.

Khulna too had a bowling hero in veteran allrounder Ziaur Rahman who finished with career-best match figures of 9 for 68 against Dhaka. Their young seamer Abdul Halim also made an impact with a five-wicket haul in the first innings. Dhaka’s Shuvagata Hom took 5 for 46, while Ariful Haque took a nine-wicket match haul for Rangpur against Rajshahi including 6 for 41 in the first innings. For Dhaka Metro, Arafat Sunny capped off his NCL campaign with a five-wicket haul.

It will forever be remembered as the game where Ruyel Miah stole the show, helping Sylhet Division blow Chittagong away by nine wickets to earn their promotion. Ruyel ripped Chittgong apart on the first day, ending their innings on 106 shortly after the first session. He didn’t stop in the second innings, taking five for 39 and earning himself a BPL contract. Chittagong’s Ifran Hossain took a six-wicket haul but it wasn’t enough as Sylhet stormed to the win in just two days.