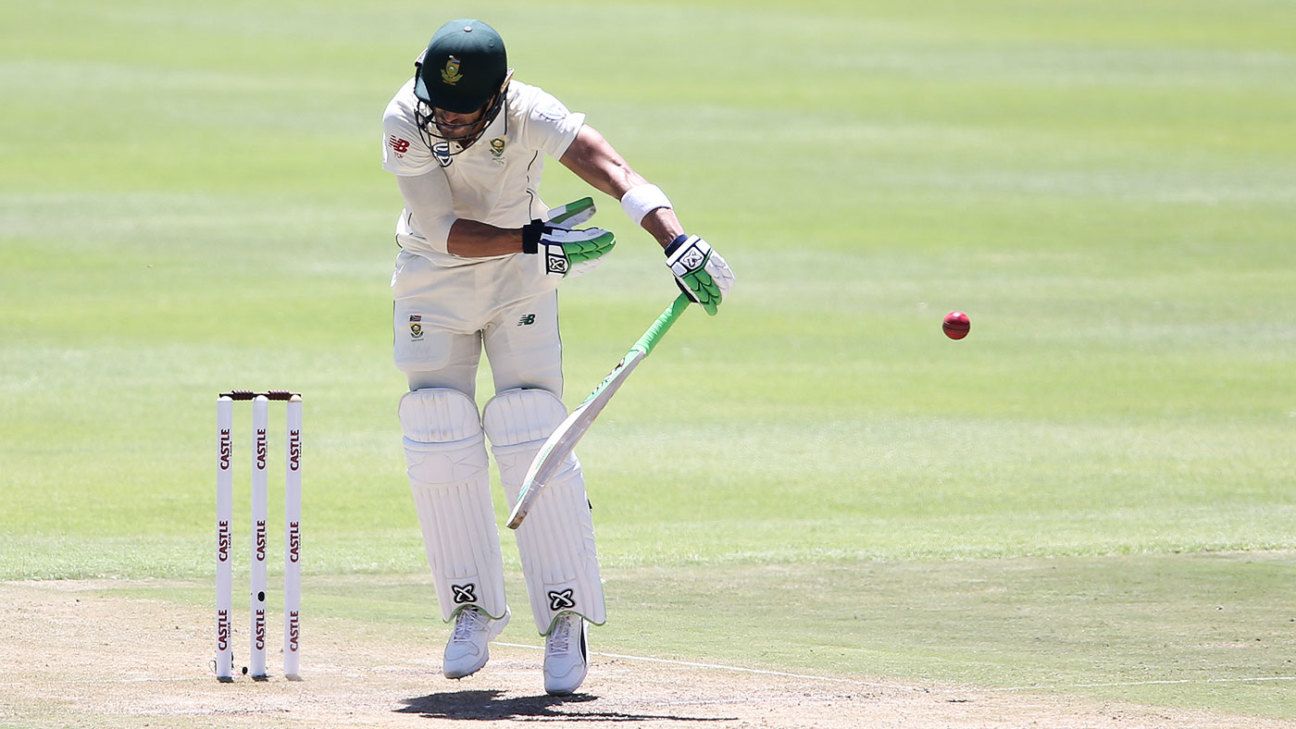 South Africa coach Ottis Gibson has defended the preparation of pitches suited to seam and swing after the facilities in the first two Tests at Centurion and Newlands came in for criticism from Pakistan coach Mickey Arthur.

Gibson called Arthur’s comments about the Newlands track “a little bit strange”, considering that Faf du Plessis scored a hundred during a day in which Pakistan’s own fast bowlers could only take four wickets.

“I don’t prepare the pitch, but we expect home pitches to favour our team,” Gibson said, while captain du Plessis insisted: “Any groundsman, you can ask them, our question to them is always ‘has the pitch got pace and bounce?’ And that’s all we’re looking for.”

“We never ever ask for ridiculous pitches,” du Plessis said. “We just ask for pitches with a bit of pace and bounce. So when there is a bit of seam movement and a bit of pace and bounce, you have to adapt to that. Temba [Bavuma] is a great example. He’s scored two Test matches in a row now on tough pitches, he’s scored runs. He shows that it’s possible if you apply yourself mentally, and you’ve got a good technique, there is a way.”

Gibson also argued that it was up to the ICC as the governing body of world cricket to decide upon the standards of pitches for Test cricket.

“If you get pitches that suit your attack, every other country does it,” he said. “Therefore we will continue to do it, until the ICC says to everybody ‘this is the standard pitch you prepare for Test cricket’, and everybody plays on it and it’s a level playing field for everybody. But at the moment, when you go away from home, you take what you get. We did that in Sri Lanka and it wasn’t nice. It wasn’t comfortable and we lost horribly.”

Arthur had bemoaned repeated stoppages in play as batsmen were attended to after being struck by the ball during South Africa’s first innings – du Plessis, Temba Bavuma and Hashim Amla all copped painful blows during the match. But Gibson suggested that batsmen getting hit by the ball is just part of the game.

“Guys have been getting hit in Test cricket for years. Guys still got hit off a length back then too, and they showed some character and some courage and they stuck it out. Faf got hit, but he stuck it out and he got a hundred. The ICC is still the governing body for world cricket. If the ICC feels that it’s leaning too heavily against a team, then the ICC steps in and says listen, this is the standard pitch that we expect across the world for Test cricket, then we play on that and it’s a level playing field for everybody.”

But such an intervention is not yet necessary, Gibson said, and that such a step would hopefully only happen if the ICC think tailoring pitches has “gone too far”.

“No, not yet,” Gibson said when asked about the preparation of pitches escalating into an arms race between teams looking to extend home advantage. “If [the ICC] think it’s gone too far, that’s their decision to make. It’s not my decision.”

There will be plenty of attention on the strip prepared for the third and final Test of the series at the Wanderers, starting on January 11. The pitch used for South Africa’s match against India in January last year was rated “poor” by the ICC, receiving three demerit points. If the venue reaches a total of five demerit points during a five-year period, it will be suspended from hosting any international cricket for 12 months.