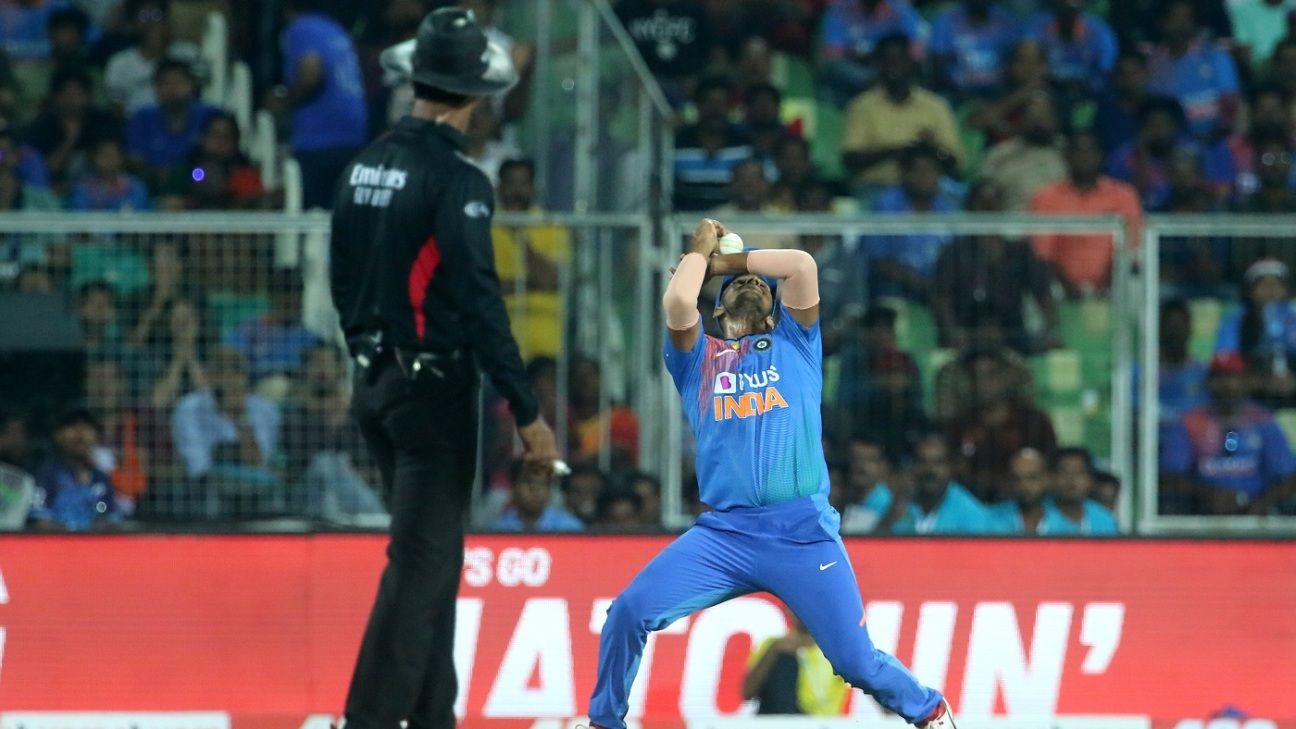 India captain Virat Kohli said his side couldn’t expect to win matches if they continued to slip up in the field. West Indies beat India by eight wickets in the second T20I on Sunday to leave the series 1-1 going into the decider. While the margin eight wickets with nine balls to spare appeared comprehensive, West Indies benefitted from three dropped catches in their chase. That followed from the first T20I, which India won despite five dropped chances.

In the second game, two catches were put down in the fifth over, bowled by Bhuvneshwar Kumar, benefitting openers Lendl Simmons and Evin Lewis.

Washington Sundar dropped a straightforward chance at mid-off when Simmons was on 6 – he would go on to make 67* off 45 – while Rishabh Pant put down a more difficult chance two balls later, having to dive to his left after following the batsman by moving to his right. Lewis was on 16 then and the initial pressure built by tight bowling quickly dissipated.

Later on, the returning Nicholas Pooran was also put down by Shreyas Iyer in the 17th over when he was on 18, and West Indies hunted down India’s 170 for 7 comfortably.

“We had to get those 15 extra runs to defend, but look, if you field like that, then no total is big enough,” Kohli told Star Sports after the match. “Last two games we have been below par in the field. We were good with the ball, in the first four overs we created enough pressure… and then you drop two chances in a T20 game in one over, that’s going to cost you. If they lose two wickets in one over, the pressure’s on them. I think it’s a game of margins and we need to understand where we went wrong. It’s pretty evident. It’s there for everyone to see and for us to improve on. I think fielding is something we need to be more brave about, and not worry about dropping catches.”

“It’s there for everyone to see and for us to improve on. I think fielding is something we need to be more brave about, and not worry about dropping catches.”

Kohli himself pulled off the most difficult catch of the match, sprinting to his right at long-on to hold onto a hard, flat Shimron Hetmyer hit. “It was one of those catches that just stuck in the hand. It came out of the lights a little bit, but I just committed to the ball and put both hands out, and luckily it came into my hand,” Kohli said. “Last game I put one hand out and I dropped it. It’s about putting in the effort when you can and sometimes they stick and sometimes they don’t.”

Going with two hands instead of one was not the only thing Kohli changed from the first game to the second. He pushed himself down the order to No.4, and sent in the raw Shivam Dube at No.3.

“Well we knew the pitch is going to offer something to the spinners. They were going to start with a spinner, so we thought why not Shivam goes up and tries and attacks the spinner,” Kohli explained. “Because the batting line-up that we have will probably go unused if two guys at the top fire. That was the plan behind it, worked pretty well.

“We were really good for the first 16 overs – we were 140 for 4 [144 for 4]. From there on I think you expect to get about 40-45 runs in the last four overs and not 30. I think we lacked there a little bit, so we have to focus on that more. I think Shivam’s knock is what propelled us towards 170 because the ball wasn’t coming on to the bat so well in the first half. To be honest, West Indies assessed the pitch really nicely and they bowled enough cutters and changes of pace to not let us get any momentum.”