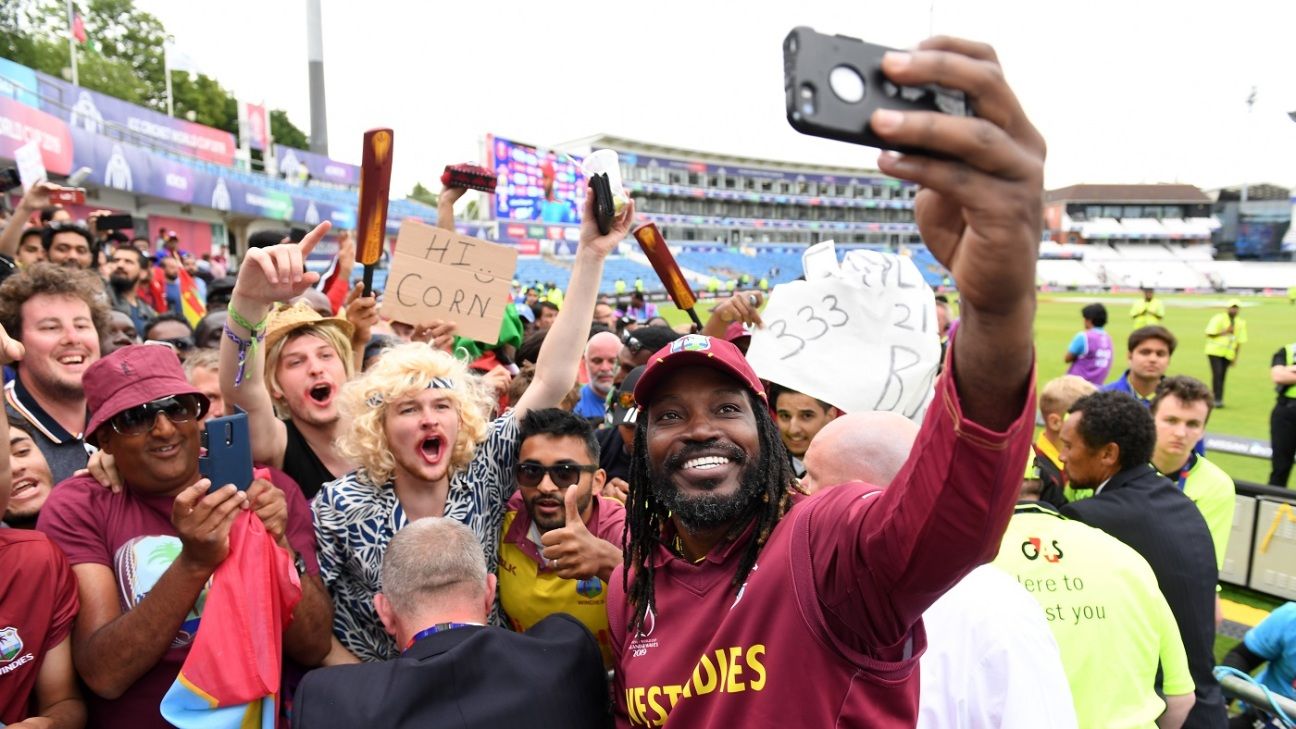 He opened the batting, and scored an 18-ball 7. He bowled six overs and picked up a wicket. He strutted around the Headingley turf, mostly with a big smile on his face, and threw in as much drama as possible into pouching a sitter on the field and, if that wasn’t enough, proceeded to do six push-ups. And after West Indies had beaten Afghanistan to finish their World Cup 2019 campaign, Chris Gayle confirmed – again – that as far as World Cups were concerned, he was done.

“It’s a brilliant privilege and honour to represent West Indies in five World Cups (2003 to 2019),” he then told Brett Lee and Dean Jones, among others, while speaking to the host broadcaster. “Disappointed to end the World Cup without making it to the final four, but at the same time, I’m grateful to actually be here. A lot has happened behind the scenes, (and) to actually be here is fantastic. To finish off with a win is fantastic for me.

“We have a great bunch, some great youngsters as well and it’s up to them to lift West Indies cricket from here on. I will still be around, and give my input to West Indies cricket. I still have a few more games left as well, so we’ll see what happens. The World Cup (form and results wise) wasn’t the one I wanted from a personal point of view, but at the same time, you can’t complain too much. It’s one of those things.”

In February this year, Gayle had declared that he would be done with ODIs after the World Cup, but during the tournament he offered the possibility of playing on for a bit longer. When asked if that reconsideration would stretch to playing another World Cup, Gayle played along.

“In the last World Cup, I hit a double century against Zimbabwe. It was my best World Cup, I would say. To be able to get a double-century in a World Cup, I think that’s a fantastic achievement. I didn’t get a century in this one, but I can’t complain. I enjoyed this World Cup as much as I enjoy each and every World Cup.”

“Should I give it some thought,” he said with a big laugh. “Yes, it is my last World Cup. Unless they can give me two years to rest and I can come back in two years’ time again. It’s definitely my last World Cup. Like I said, life goes on. The game has done a lot for me and I’m privileged to be part of another World Cup.

“It is possible [to play the 2023 edition] if I put in the work, but I don’t intend to put my body on the line. As you can see, I’m struggling a bit. Four years is a long way off, and I’m not considering another World Cup, to be honest with you.”

Gayle, who picked up one of the match balls – “a prized possession” – did express regret at not winning the trophy, but acknowledged the support of his team-mates, who let him do things his way. “All the guys rallied around me, and the support from the youngsters was fantastic,” Gayle said. “I can’t really fault anyone, but I must commend the staff as well for the work ethic they’ve actually put in for the youngsters and myself.

“Life goes on, it’s one of those things. Words can’t explain what I feel right now.”

There were moments in the World Cup when some of the West Indian youngsters gave enough indications to suggest cricket in the Caribbean has a bright future. Nicholas Pooran, Shai Hope and Shimron Hetmyer with the bat, and Sheldon Cottrell and Oshane Thomas created a splash.

“The future definitely looks bright,” Gayle agreed. “Hetmyer, Shai Hope, Pooran as well – those guys will carry the flag and make sure West Indies cricket is back where it belongs. It’s just for them to actually take ownership and take responsibility out there in the middle.

“We have a young captain as well, Jason Holder, he’s been around five years now. These guys will need to rally around West Indies cricket as long as possible, and I’m looking forward to (watching them in) the next World Cup as well.

“I’ll be telling the youngsters to demolish bowlers.”

Gayle, meanwhile, will continue to play franchise cricket, and expects to be in the mix for the tour of India later in the year, and “then hopefully we’ll see what happens later on in the year.”

Gayle has finished with 1186 runs from 35 World Cup matches, sixth in the list of most prolific run-getters in the marquee event and second among West Indians behind Brian Lara’s mark of 1225. The 2019 edition had Gayle in patchy form, with 242 runs in eight innings and two half-centuries, scored at a strike rate of 88.32.