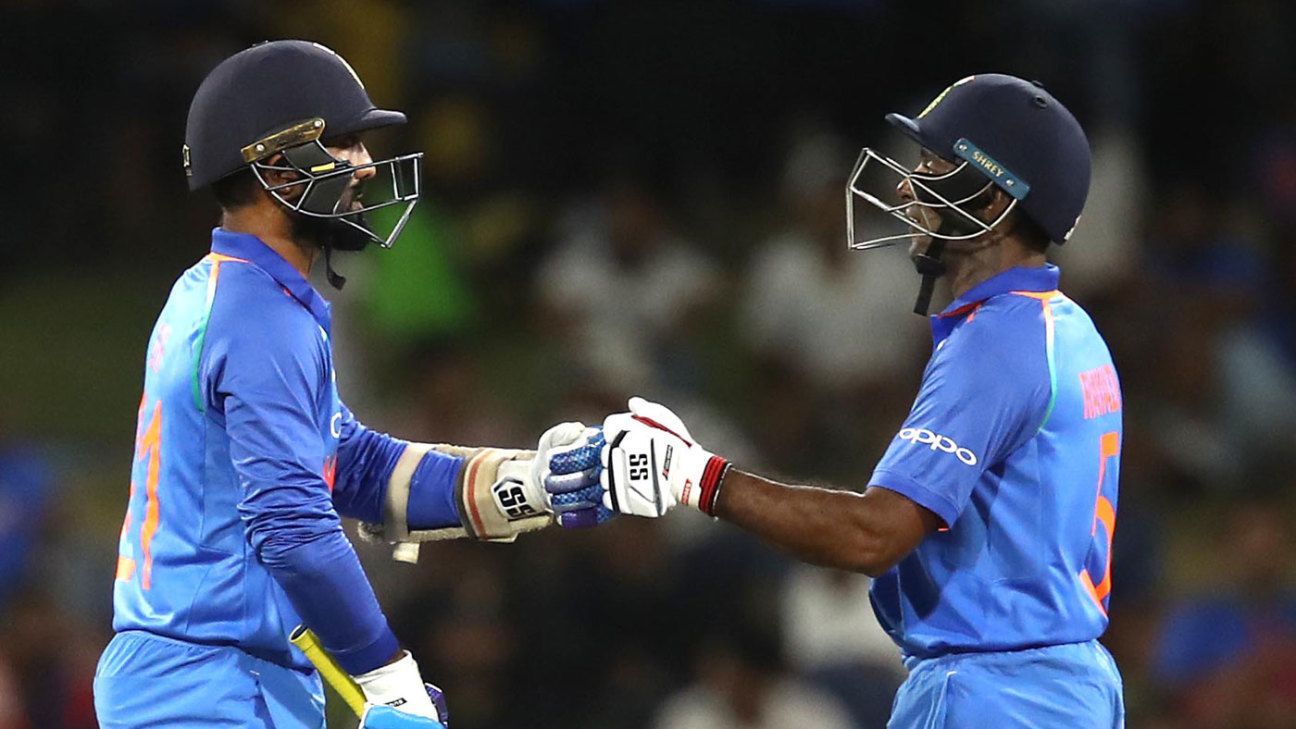 India keep racking up ODI trophies – they’ll collect their tenth in the last 11 series – but through it all there has remained one major area of concern: the No. 4 spot.

Nine men have been tried since the end of the Champions Trophy in June 2017 with Ambati Rayudu the incumbent, having scored 341 runs in nine innings at an average of 56 and a strike-rate of 93. Dinesh Karthik has been decent as well with his ability to score runs through unorthodox shots. MS Dhoni is an option when there have been too many early wickets, and Hardik Pandya too has had spells up the order, often when the team needed quick runs.

India don’t quite know who the best out of that lot is. Virat Kohli backed Rayudu at No. 4 in October but, earlier this month, his vice-captain Rohit Sharma suggested that Dhoni was better suited for the role. The debate was reopened once again after the team wrapped up a 3-0 lead in the five-match series against New Zealand, with Kohli saying there are enough contenders to consider a more flexible approach.

“I think the last five games if you see, two in Australia and three here, I said No. 4 is still something we’re looking to solidify. But when Rayudu starts playing like that, you start feeling more confident about the batting line-up,” he said. “Dinesh is in great form as well so he can step in at any time in case we need to shuffle the middle order at any stage. MS has been hitting the ball really well. So everyone’s in a good zone. I don’t feel after looking at the first three games we have a lot of things to worry about.”

Firepower in the middle order is all the more important in modern-day limited-overs cricket – especially with a World Cup coming up – because it helps teams think of pushing a 300 total up to 350 and more. England have built their success around a heavyweight middle order, rising up to the No. 1 ranking in ODIs, and breaking the record for the highest total twice in the last three years.

And Kohli felt having batsmen who accelerate through overs 30 to 40, especially while setting a total, could be a major point of difference in a one-day contest.

“When you’re chasing, you’re anyway going after a target that’s big,” Kohli said. “But when batting first, you don’t know how much to set. So that is up to the two people batting in the middle. Who is the guy who wants to take that initiative and who is the guy who wants to or has to bat till the end. I think it will boil down to communication but that’s definitely going to be a team goal not just for us but all around the world. You see the patterns of teams that are getting big scores, that is the window they’re targeting and get those 20-30 extra runs.”

Kohli has been rested from the final two ODIs of the series and he said he was happy with what he had seen from his players. “The thing that stands out for me is the relentless intensity with which the guys have played all these three games, not relaxing after 2-0 up as well, which I think is very very important. Now they’ve started to realise how to close series and how to capitalise when we have advantage in a series.

“The bowlers were as hungry as the first two games. (Mohammed) Shami running in. Bhuvi (Bhuvneshwar Kumar) bowling good areas. Hardik was really, really good today as well and those two spinners [Kuldeep Yadav and Yuzvendra Chahal] are quality anyway. Overall I’m really very pleased with how the games have gone.”