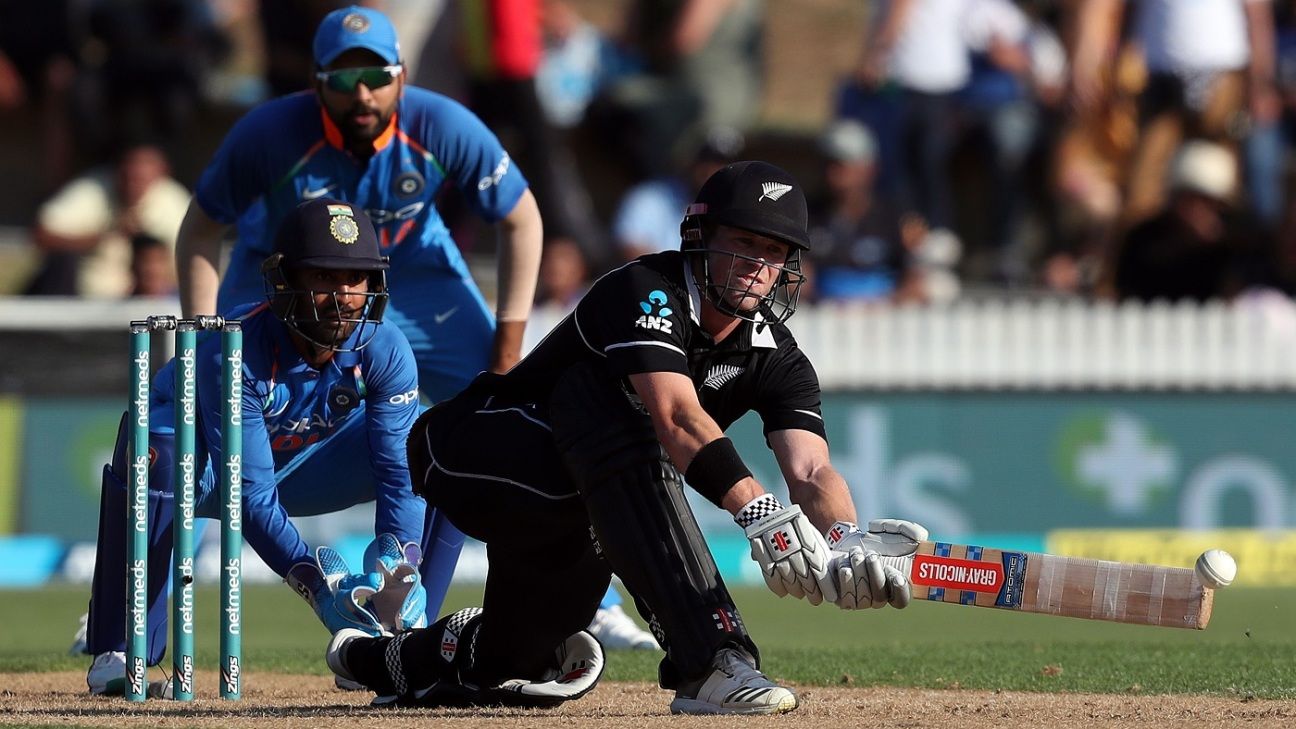 As New Zealand firm up on their preparations for the World Cup 2019, one of the spots that could see a shift is at the top, with Henry Nicholls replacing Colin Munro. Nicholls was preferred ahead of Munro in the fourth ODI against India and made an unbeaten 30 as New Zealand chased down India’s 92 all out in just 14.4 overs.

Munro was dropped after below-par returns at the top of the order. Though he has scored quickly, Munro averages only 22.15 since January 2018, and his career average is 25.31.

Nicholls, who averages 35.60 at a strike-rate of 87.42 from 37 ODIs, was pushed up the order with Munro left out of the XI. This was the first time Nicholls had opened in ODIs, though he said an ascendancy in the batting order had been discussed with coach Gary Stead.

“The coach has talked me a little bit about it being an option throughout the summer,” Nicholls said. “We knew it was going to happen a couple of days out. For me, it wasn’t too much of a change. I’ve done it for Canterbury quite a bit. It’s just making a bit of a mental adjustment that you’re going to have a bit more time to bat than usual. It’s something I enjoyed doing.”

Nicholls said that batting lower down the order had prepared him for reacting to different situations.

“When you open you have a lot more certainty around the situation you’re coming into,” he said. “Batting at six has helped me a lot in my game in terms of the situation always being different when you’re coming in. Either you’re trying to rebuild the innings, or you’re trying to finish off an innings. Getting back at the top where I usually bat at Canterbury and coming through the age-groups is something I enjoyed doing. And having Martin’s [Guptill] experience there certainly helped me as well.”

Nicholls has opened in nine List A Games for Canterbury, and averages 77.57 in those at quicker than a run a ball. The majority of those games happened in 2014 and 2015, but with Stead as coach of Canterbury.

“Part of our campaign plan for this Indian series was to look at options at the top of the order, and Henry Nicholls has been a bit of a fix-it man across a number of areas,” Stead told Radio Sport Breakfast. I know from my time when I was coaching Henry at Canterbury that he had opened before … so it wasn’t a real surprise to me that he could do this.

“In terms of the future and where we go, who knows at this stage. Colin Munro is certainly in our plans; I think it’s likely that Henry will get another go in the short-term though. After that, who knows, there’s selection [discussions] we still need to go through. Colin Munro, it certainly isn’t the end of him, but we’ve talked about things and we’ve worked out some areas of the game we want to keep seeing Colin improve in.”

India had already sealed the five-match ODI series by winning the first three games, but the home side ensured they had something to show with victory in the fourth ODI. The win was built on Trent Boult’s 5 for 21, bowling all ten overs in an unbroken spell at the top.

“He’s a world-class bowler,” Nicholls said. “I think the guys at the other end as well supported him really well. Certainly the longest spell I’ve seen him bowl. Bowling ten overs on the trot in the heat as well, as well as he did, was huge. It was pretty inspiring. And with the work at the other end it was a really complete performance with the ball. It was nice for us to get back to playing the cricket that we know we can play. Trent led us with the ball, and really emphatic victory.”

The fifth and final ODI will take place in Wellington on February 3.