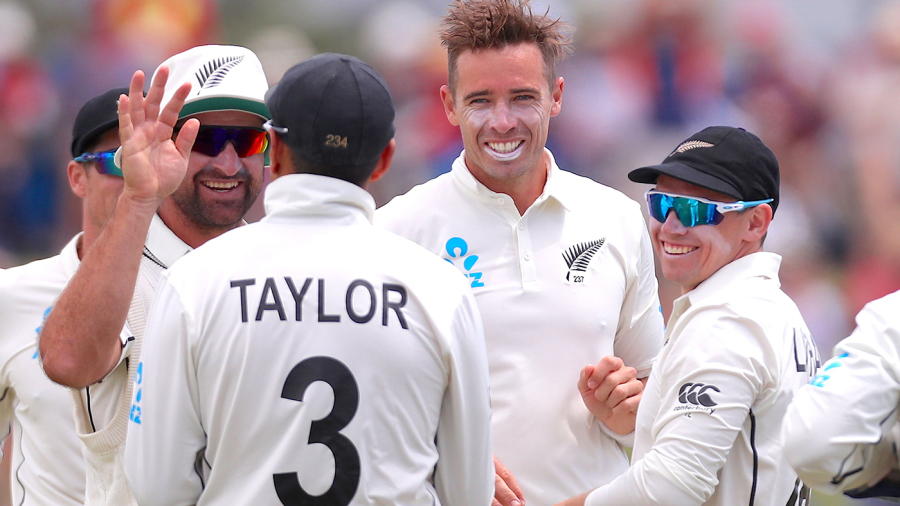 Tim Southee’s three-wicket burst put England on the back foot during an eventful morning session in Mount Maunganui. Having profited from a cautious approach on day one, England’s batsmen reverted to type during a middle-order collapse, although an unbroken ninth-wicket stand of 34 between Jos Buttler and Jack Leach did manage to repel New Zealand until lunch.

After a quiet opening, Southee struck three times in 11 balls. Ben Stokes was first to fall, nine runs short of century, and Southee then rounded up Ollie Pope and Sam Curran in his next over. Trent Boult claimed his first wicket of the match to leave England 295 for 8, but Buttler continued to look dangerous as England sought to repair the damage.

The tourists had actually resumed in positive fashion, with Stokes and Pope extending their overnight partnership to 74. Stokes appeared set for his third century in five Tests, picking up regular boundaries as he moved into the 90s, only for Ross Taylor to brilliantly atone for dropping him on day one. With New Zealand having shifted their cordon wide, Taylor had to react instinctively to a chance flying through regulation first slip but clung on one-handed high to his right.

Kane Williamson had initially held Southee back, handing the still-newish ball to Colin de Grandhomme first up. But once Southee had pried out Stokes, he harnessed the conditions expertly to rip through England’s middle order.

Operating in the high 120s kph but showing just why New Zealand’s attack is so adept when there is a hint of swing on offer, Southee struck twice with consecutive deliveries. Pope, who successfuly overturned an lbw decision that went de Grandhomme’s way in the third over of the morning, played some eye-catching shots to move past his previous Test best of 28, made on debut against India in 2018, but was lured into flashing at a delivery that left him enough to clip the edge through to BJ Watling.

Curran was then bamboozled by a full inswinger, opting to review despite ball-tracking showing that the delivery would have crashed into middle and leg stumps. Jofra Archer negotiated the hat-trick ball uncertainly, via a deflection for four off his pads, and then fell in the following over as Boult found his outside edge. From the relative comfort of 277 for 4, England had shipped 4 for 18 in 21 deliveries.

With Leach nearly running out Buttler off the first ball he faced, England were in serious danger of folding for around 300. But Henry Nicholls could not manage a direct hit from the covers with the batsman nowhere in the frame, and Buttler hinted at his destructive capabilities a couple of overs later when casually lofting Southee back down the ground for four.

With lunch approaching, he launched Boult high over long-off for six, but with conditions still relatively friendly for batting, New Zealand were the happier of the sides after the morning’s progress.