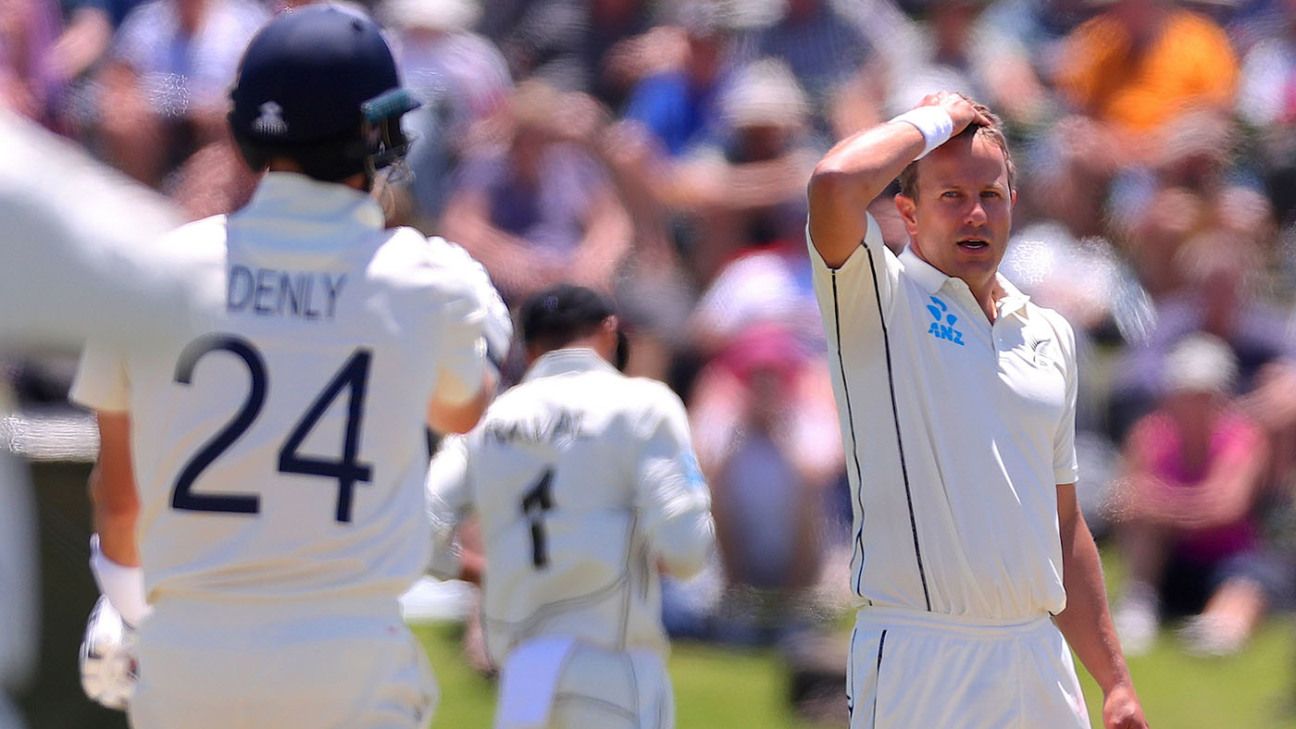 New Zealand were left to rue missed opportunities after a day of hard work and few rewards at the Bay Oval.

On a slow – some might say painfully slow – surface, New Zealand kept such a check on England’s scoring that, for much of the day, the run-rate barely rose much above two-an-over.

But a couple of missed opportunities – not least a dropped chance offered by Ben Stokes on 63 – meant New Zealand were unable to capitalise on their bowlers’ discipline. Rory Burns also survived a chance on 37, when he edged the deserving Tim Southee between slip fielders who left the chance to one another while Burns might also have been given out had New Zealand reviewed an appeal for caught behind when he had 10. Replays suggested he had edged Trent Boult to the keeper, but New Zealand were unable to hear the edge in the blustery wind.

While Neil Wagner later insisted, with more than a little justification, that New Zealand were satisfied with the way they bowled and “fairly happy” with the match situation, he accepted such moments were “frustrating”.

“By no stretch have they got away from us so I think we’re still fairly happy with where we are at,” he said. “It is frustrating when catches go down and those things happen, but we’re a close group and no-one drops a catch on purpose. It can happen.

“Ben Stokes is a special talent and he is a bit of a freak at times. Everyone wants to get him out because you know how important a wicket he is.

“When it’s windy it’s quite hard to hear those things [edges]. There was a little bit of a noise but it was a bob each way, you have to take that risk with reviews but also you want to keep hold of them for when you do need them.

“I thought we bowled well today and stuck at it. I know that our bowlers have bowled way worse than that and had more luck.”

Although New Zealand were able to gain more swing than was, perhaps, anticipated the slow nature of the pitch meant both sides were persuaded to take a fairly attritional approach to the game. And Wagner was quick to pay tribute to England’s patient batting.

“They batted really well,” he said. “They showed lots of patience and left well. There was swing on offer throughout the day and everything we threw at them they played quite well. At times they had a bit of luck but you need a bit of luck sometimes in cricket. The toss was always going to be crucial. It tends to be nice to bat on on day one.”

There may be questions about the role – or the usage – of spinner Mitchell Santner, though. He was not called upon to bowl until the 72nd over of the day and delivered only five overs on the day. He may yet win the game for New Zealand in the second innings – though it doesn’t seem especially likely; he’s taken 13 wickets in 10 Tests in New Zealand – but his lack of overs on the first day does increase the workload on his colleagues.

Much of the burden was taken up by Colin de Grandhomme. In 19 disciplined overs he conceded only two boundaries and went at under one-and-a-half an over. He also claimed the wickets of both openers as he maintained a perfect length and gained just enough swing to threaten the edge of the bat.

“He’s got good skills and, with the pitch being on the slow side and getting slower, his slight lack of pace makes it hard to force the gaps,” Rory Burns said. “The men in the ring become catching options and you have to wait to pick him off.

“The pitch seems like it’ll probably get slower so it’s lending itself to quite attritional cricket. You’ve got to scrap in and get in.”

Wagner added: “There’s a long way to go and a lot of cricket to play. It is hard to say if the pitch will deteriorate. There’s a lot of unknown factors at the ground. This is the first Test match here and in the domestic games we’ve played here it tends to dry out with the wind.”