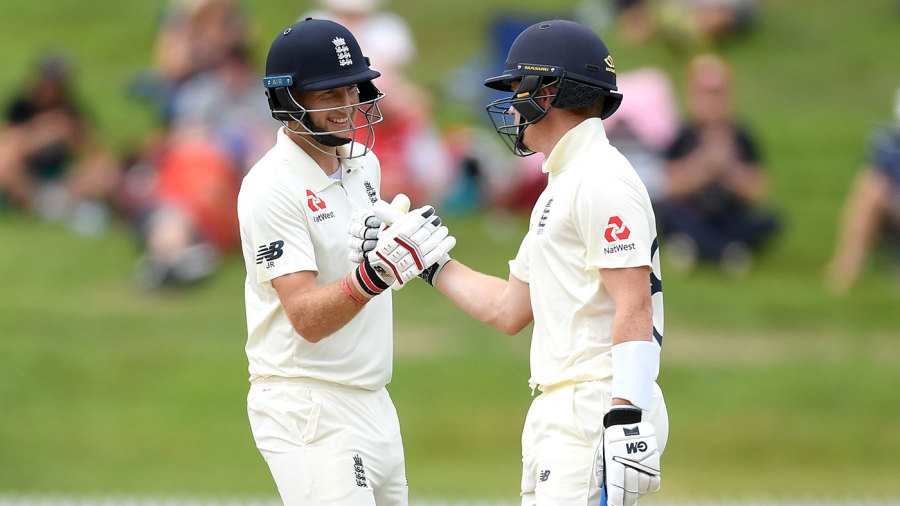 Joe Root was closing in on his second Test-match double century by lunch on the fourth day in Hamilton, as he and Ollie Pope ticked off their team’s primary objective for the innings by overhauling New Zealand’s first-innings total of 375.

By the break, England led by four runs with five wickets still standing, and having extended their overnight sixth-wicket stand to 117 in another wicketless session, they had given themselves an outside chance of turning the screw on their hosts in the final five sessions of this contest.

It was not exactly pretty viewing as England resumed on their overnight 269 for 5 in front of a sparse Monday crowd, but for the long-term health of this recalibrated Test squad, it was an important session of play, as Root resolved to press ever onwards in what is now the second longest innings of his career in terms of balls faced, and Pope got himself properly acquainted with the rhythms of Test match batting in racking up the highest score of his own fledgling career.

The Hamilton pitch did not exactly add to the spectacle. A couple of deliveries scuttled on a good length, including one to Root in the opening overs which missed his off stump by inches, and that trait may yet be exacerbated when England get a chance to charge in with a new ball later in the contest. But, broadly speaking, it has proved to be a soulless strip of turf that has sucked the life out of New Zealand’s best endeavours.

Root will not care for the context, however. Having done the needful in bringing up three figures on the third afternoon, thus ending a barren run that had spanned the English summer, today he set out his stall for a big one from the moment play resumed, reaching the break on 178 from 379 balls.

New Zealand v England is available in the US on ESPN+. Subscribe to ESPN+ and tune in to the Test series.

From the outset, Root’s feet and hands were back in synch, as he found himself playing the delicate dabs through third man that have long been such a feature of his best, most anonymous, feats of run-making, but which had deserted him of late – notably in the first Test at Bay Oval where he had twice fenced tamely to the cordon.

His improvisatory instincts didn’t desert him either, even while New Zealand ploughed a disciplined line and length, looking to choke the runs and force the errors that they know this team are perfectly capable of making. He unfurled an uppercut to a slow loopy bouncer from Neil Wagner that flew over the keeper for four, then kept his eyes on a short ball that scuttled to pull it effectively at shin height through midwicket.

He brought up his 150 with a nurdle off the pads off the spin of Mitchell Santner, one of a number of tucks and flicks that kept his innings moving, and was warmly embraced by his young partner Pope, whose own rate of scoring was attritional in the extreme, but who can only benefit from being given a front-row seat to one of his captain’s grittier displays.

At the age of 21, this was a “jam tomorrow” performance from Pope. Strictly speaking, his xx strike-rate wasn’t exactly what England needed if they are to force victory on the final day, and the absence of Jos Buttler, the man who would have been coming in at No.7 but for his back injury, was keenly felt at a moment when England might have looked to up the ante.

But nevertheless, after complaints that England’s batsmen have been too flighty in recent seasons, there could be no quibbling with the application that Pope brought to his innings – all achieved, remember, after squatting behind the stumps for 129 overs in his unlikely role as wicketkeeper.

At times in the early stages of the day’s play, Pope was susceptible to the same old sucker punch that had undermined him in his first season of Test cricket, against India in 2018 – namely the tendency to get too greedy whenever the ball was outside his eyeline. He survived more than a handful of urgent air-shots before he had reached 20, but with Root providing an object lesson in balance and shot selection, he was growing in stature by the break.

Moments before the interval, it was left to Pope to carve the cut through third man that took England into the lead for the first time in the match. He was unbeaten at the break on 46 from 148 balls, and within spitting distance of an important milestone in his career.