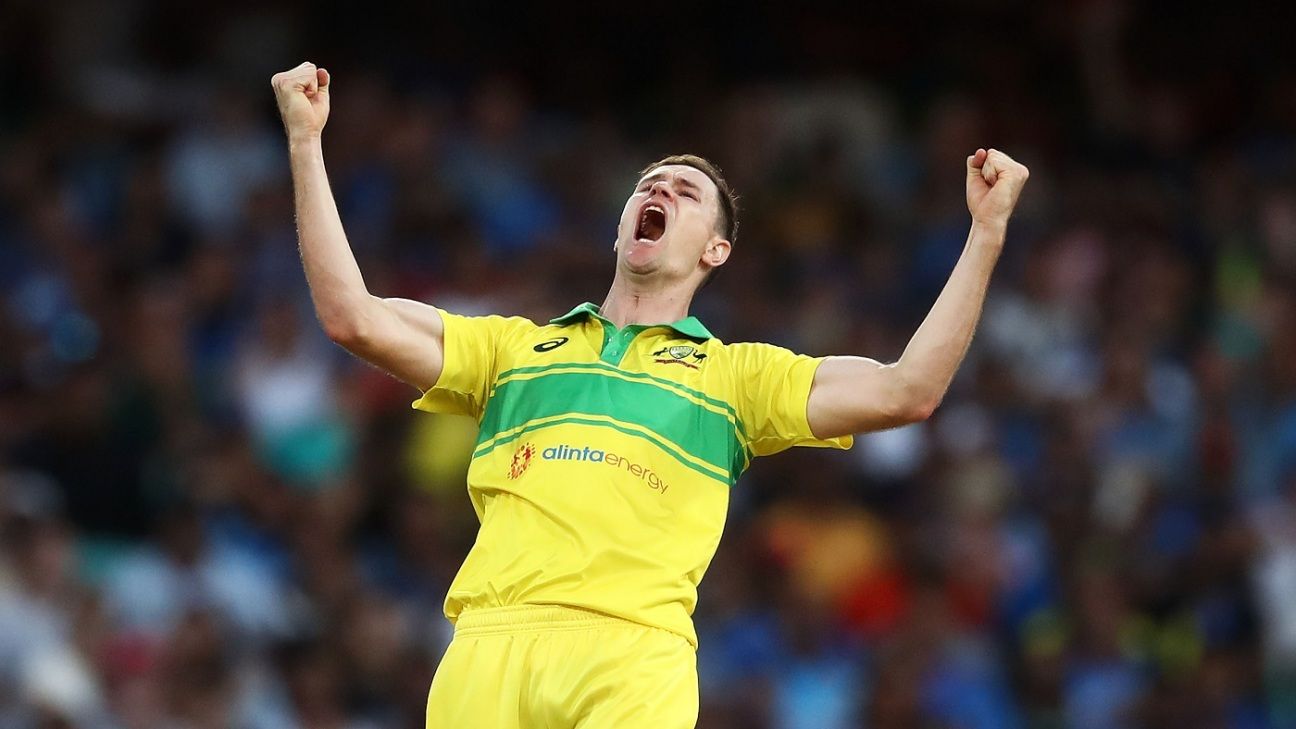 In a season where there hasn’t been much cheer for the Australia team, the sight of two inexperienced pacemen, Jason Behrendorff and Jhye Richardson, making sizeable inroads into India’s top order at the SCG will have been welcome.

Richardson took the Man-of-the-Match award for his 4 for 26 which included the scalp of Virat Kohli while Behrendorff bagged two wickets on his debut, Shikhar Dhawan in his first over and then MS Dhoni – albeit to a poor lbw decision – when India were threatening to make a game of it.

While it was the three wickets inside the opening fours overs, which put Australia in control, there was also a sight later in the innings, which will gladden the hearts of the home side: a hint of reverse swing. Quite how much depended on the bowlers – and a few of the Indian batsmen – but it was something the Test attack could not manage during the entirety of the Border-Gavaskar Trophy.

“Surprisingly, the ball was reversing quite a bit when these guys were bowling so to adjust to that is not really easy for the new batter,” Rohit Sharma said after his 133, which gave India a chance in the chase of 289.

“We are always looking to use as much of the wicket and ball to our advantage,” Behrendorff said as the teams arrived in Adelaide on Sunday. “The ball might have started to reverse a little, we got hit into the stands a few times which might have helped scuff up the ball. We do whatever we can, change of pace and cross-seam deliveries, to change it up.”

With Behrendorff’s height and left-arm angle and Richardson’s skiddy pace there were different challenges posed by Australia’s latest new-ball attack. Behrendorff pinned Dhawan lbw with his sixth delivery and Richardson beat Ambati Rayudu for pace having had a touch of fortune when Kohli clipped to square leg.

“I was actually disappointed when the ball came out, probably bowled a bit too straight but I had a fielder there who hung on to it so it is a wicket I will remember for a very long time,” Richardson said of Kohli’s scalp. “We understood that it wasn’t the quickest wicket in the world, so we knew when the ball goes a little softer later in the innings, when we turn the slower balls and change of pace and we thought it would be quite effective and we saw that at the end.”

While Richardson is having his second run in the ODI side following four matches against England last year, for Behrendorff his debut marked a high point after a battle with a back injury which ruled him out of most of 2017-18. He won’t feature in first-class cricket at all this season in an attempt to ensure long-term fitness, so it’s purely a while-ball game for him.

“It’s been a really tough road for the last three years but to focus on some white-ball cricket, get some continuity and then to get the opportunity to play for my country is unreal,” he said. “You can’t really ask for much more. I joked with a couple of people before the game that I’d love to take a wicket in my first over then it happened. One way to settle the nerves.”

There was a spring back in Australia’s step as they shifted focus to the second match of the series in Adelaide on Tuesday. “To know a relatively new team in the ODI set up is able to knock-off India was great,” Behrendorff said.

And there are bigger rewards ahead in a double World Cup and Ashes year. “Justin [Langer] has said it’s a great opportunity to be able to push your selection for the World Cup. But we’ve still got a lot of white-ball cricket between now and then,” Richardson said.