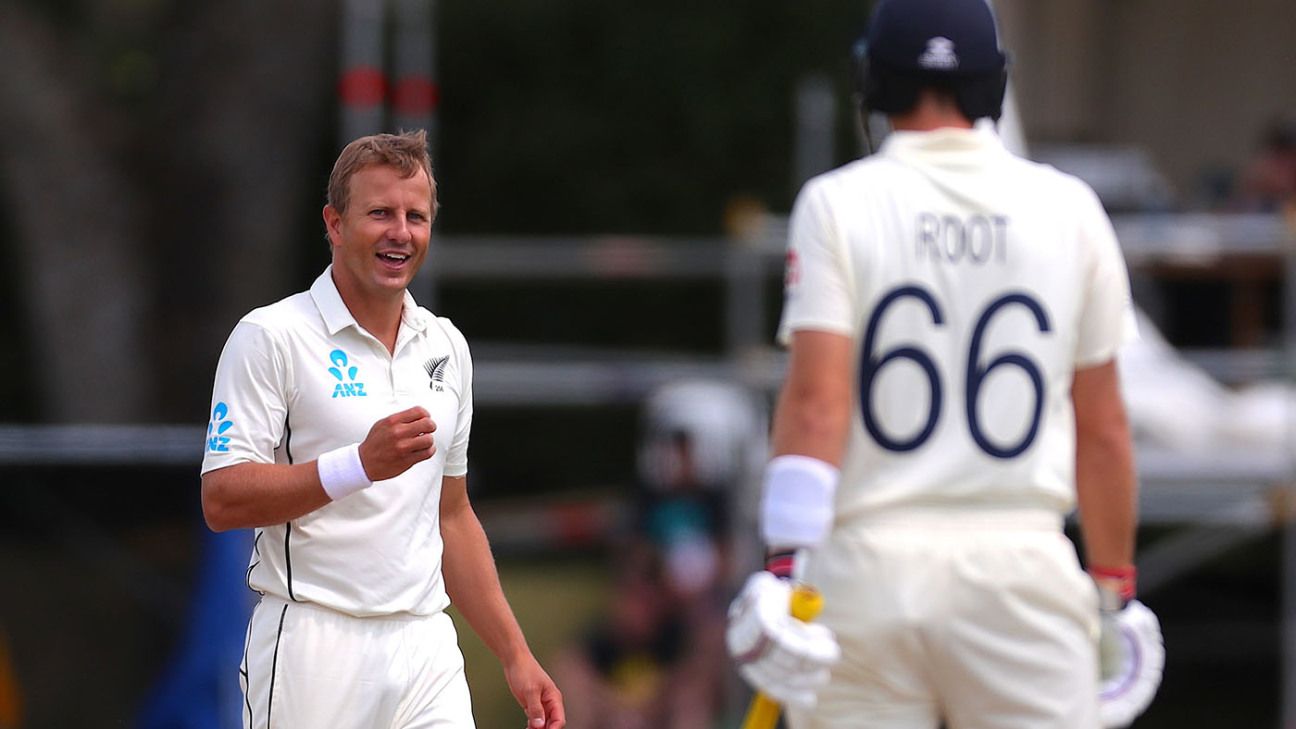 It speaks volumes for the enduring skills of Neil Wagner that, while other bowlers will look back at this series and shudder, he will reflect on it with a satisfied smile.

For while bowlers as celebrated as Jofra Archer and Stuart Broad have laboured without much success – Archer has taken two wickets so far at a cost of 100.50 apiece, Broad four at 38.75 – Wagner has claimed five-wicket hauls in both Tests despite surfaces offering him nothing.

It’s no aberration, either. Wagner has now taken five-wicket hauls in his last four Tests. His position at No. 3 in the ICC Test bowling rankings can only have been consolidated. The likes of Jasprit Bumrah and James Anderson trail in his wake.

ALSO READ: How Wagner wanged his way to the top

The ingredients of Wagner’s success are not immediately obvious. He is not especially tall, not especially quick and not, in terms of ability to generate lateral movement, especially talented. And yet there he is, again, with a five-wicket haul.

“I bowl a lot of overs,” he said. “And if you bowl the majority of the overs the chances are high that you can take some wickets, too. That’s my role.”

It’s a simplification, of course. Wagner has actually bowled fewer overs in the series against England than Tim Southee and, while Southee has had the new ball, Wagner has been obliged to come on later. But it is true that Wagner’s stamina allows him to bowl long spells – he has bowled more of 10-overs or more than any other bowler since his debut – with liberal use of the short ball.

“One of my only attributes is that I bowl a lot of overs and I can back it up and keep going,” he said. “I’m blessed with my body that it’s been pretty good and I can bowl long spells. If you keep putting pressure on then hopefully wickets come your way.”

He was equally modest about his success in the Hamilton Test. “I thought I was bit lucky to get the rewards. All the other bowlers bowled well and grafted away. It just sort of came my way and I ended up getting a couple of wickets. But all the bowlers bowled well with not a lot of luck and reward. We hunt as a pack and bowl really well in partnerships and luckily it came our way.”

There’s a grain of truth in that explanation. Wagner picked up four wickets in the final seven overs of the England innings here when the batsmen decided to attempt to accelerate to set up a declaration. So, after hours of careful accumulation, Ollie Pope was punished for attempting to hit a short ball to the boundary and Chris Woakes nicked off driving on the up.

But Wagner also had the skill to exploit such a situation. So Broad and Archer were both deceived by slower, knuckle-ball deliveries. And yes, Wagner’s haul included the wickets of England’s No. 9, No. 10 and No. 11 but two of those men have Test centuries behind them and, on this surface, no wickets come easily. His figures, at one stage, were 1 for 114. Over his next 19 deliveries, he claimed four wickets for 10 runs.

“We felt that if we were going at two runs an over, we could try to tie them down and it would make it hard for them to get a big enough lead to put us under pressure,” he said. “So we had to play a patient game and build towards that period where we got wickets in clumps.

“Sometimes in New Zealand conditions you’ve got to graft away and try and tire them out to get to a point where they try to step on the gas and you know you’ve got a chance of getting a couple of wickets. It happened that way here.”

There was a moment earlier in the day when it seemed Wagner’s match might be over. Bowling to Joe Root, he saw the batsman advance down the wicket and thrash a ball back down the pitch. The crack as it hit Wagner echoed around the ground and was closely followed by gasps. A broken leg seemed possible.

As it was, Wagner barely even rubbed the blow. According to him, the ball missed his knee or shins and hit a foot relatively well protected by his bowling boots. He simply carried on as if nothing had happened.

“I was just lucky it wasn’t in the face or in the head,” Wagner said. “It just hit the foot and it’s just one of those things where it hurts at the time but you just jump back on it and keep going. It’s the nature of the game.”

Maybe. But you suspect some other bowlers, confronted by surfaces like this, might have taken the opportunity to take some time off the pitch. For Wagner the thought wouldn’t occur. New Zealand are lucky to have him.