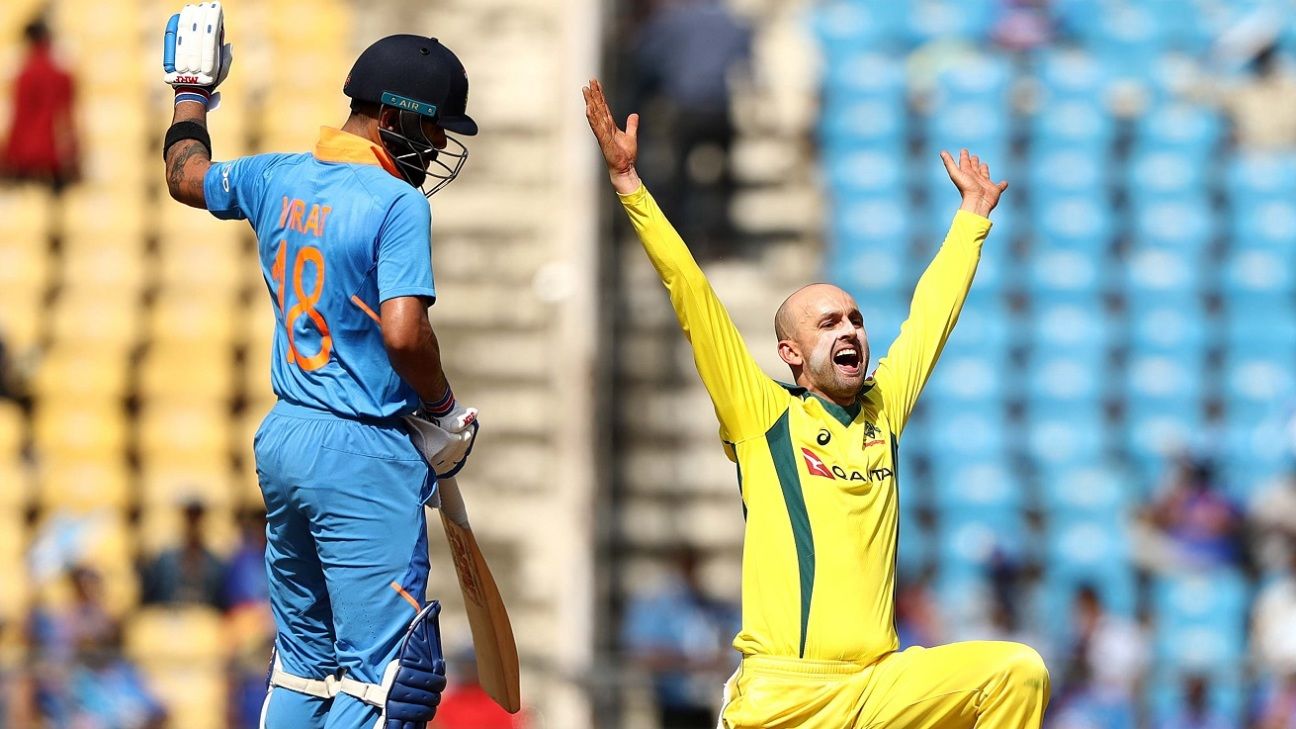 In 2015, Nathan Lyon was left out of Australia’s World Cup squad in favour of left-arm spinner Xavier Doherty, and has played a mere 18 ODIs since his debut in 2012. The other spinners who were part of the game – Doherty himself and Rangana Herath have both retired from cricket, but Lyon’s ODI career is only beginning to take shape in the lead-up to the 2019 World Cup in England.

Both on this tour in India and then in the UAE, Australia might break away from the old tradition and play two frontline spinners in Lyon and legspinner Adam Zampa. This means Lyon could be in for the most sustained period of ODI cricket in his career. He’s among the best spinners – if not the best – in Test cricket already, but have seasons in the wilderness in white-ball cricket got to him?

“No, not really, I’m really enjoying playing white-ball cricket and being back in coloured clothing for Australia,” Lyon said on the eve of the third ODI against India in Ranchi. “For me it’s about enjoying the challenge and try to get better in the shorter format. I’m always about learning every time I go out to bowl. There is added pressure I guess, but none I’m putting on myself. I’m just looking forward to doing my best for the Australian cricket team.”

Australia tested India in the first two ODIs, but they couldn’t quite close those matches out. Marcus Stoinis, in particular, was visibly broken after tripping at the final hurdle in Nagpur. Despite Australia finishing at the wrong end of the results, Lyon stressed that all was well within the management and backed his side to turn the tables on India.

“It was disappointing to lose and not get across the line against India in their home conditions,” he said. “They have some superstars. They have a legend like MS Dhoni still running around and controlling the back end of the innings through the tempo. Then, there is Virat Kohli, who in my eyes is one of the greatest players in play in my era. They are a superstar unit and we are young side that is learning. We are getting better and looking forward to the challenges. There is a lot of belief in our team and this series isn’t over yet. We believe we can still win the series. It’s going to be a challenge up against one of the best sides in the world in their backyard, but it’s exciting and we are looking forward to it.”

Lyon’s USP is his ability to generate extra bounce and overspin, but the skiddier pitches in India have somewhat neutered his threat. However, he believes that his variations in pace will hold him in good stead.

“I still believe bounce is a massive weapon,” he said. “Having the ability to change up variations, pace and mindset depending on who I’m bowling to… Personally, I’m trying to read the game; what’s going to happen in the game and control that moment. Bounce is still an important factor for me, if I can hit the stickers on the bat and hopefully those catches will go to the hand and not into the stands. It’s a good challenge and it’s something I’m excited about.”

The wristspinners are dictating terms in limited-overs cricket – Zampa has been Australia’s first-choice pick in recent times – but Lyon believes that a fingerspinner will round out the attack nicely. He had bowled constricting lines and lengths in Nagpur and came away with 1 for 42 in his 10 overs.

“Obviously the wristspinners are a valuable part to any side and I’m working on a couple of different variations to keep up with the game,” he said. “The game is moving so fast, and it’s a great opportunity for everyone to learn. But it’s pretty important to have the balance of a couple of good spinners in your side. You look at India, Kuldeep Yadav’s skills are unbelievable and [Ravindra] Jadeja has been quite impressive as well. I think it’s important for any international side to have a couple of decent spinners going into the World Cup.”

S Sriram, the former India spinner and Australia’s spin consultant, has been a prominent figure in the visitors’ training sessions, often feeding the sweep shot for Stoinis or instructing Lyon and Zampa to attack the stumps.

“Obviously, he [Sriram] knows these conditions inside-out and has passed on some great knowledge about the Indian batsmen and how they go about their business,” Lyon said. “So, to have inside knowledge like Sri has been absolutely exceptional for the batters as well as bowlers – whether fast bowling or spin bowling.

“Personally, I’ve enjoyed talking with him about variations and whether you defend or attack a batsman. He has been great personally for my mindset.”

Lyon insisted “Australia have been training the house down” on this tour. They now need to put their preparations to good use if they are to save the series in Ranchi.