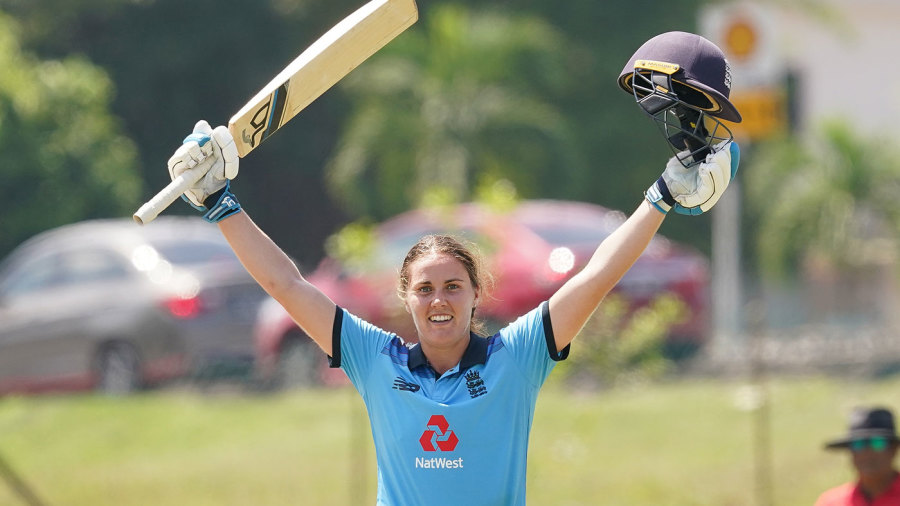 Nat Sciver cracked an 85-ball century, and Fran Wilson added a quickfire 85 not out from 49 balls, as England eased to a series-sealing 127-run victory over Pakistan in the second women’s ODI in Kuala Lumpur.

After winning the toss and batting first on a sweltering day, England suffered an early setback when Danni Wyatt fell to Nida Dar for 6 in the second over of the match.

Heather Knight and Tammy Beaumont regrouped with a 61-run stand for the second wicket, before Beaumont was the second to go, caught by Diana Baig off Nashra Sandhu for 21.

But thereafter, England took total control of the contest, as Sciver joined Knight in an 84-run stand for the third wicket, bringing up the 150 in the 29h over before Knight was run out for 86 from 100 balls.

Amy Jones chipped in with 17 from 22 balls, but it was the arrival of Wilson that kicked the innings into another gear, as she and Sciver climbed into the final 14.1 overs of the innings with an unbroken fifth-wicket stand of 146.

Wilson struck eight fours and three sixes in a career-best innings, while Sciver reached her third ODI hundred from the penultimate ball of the innings, as England closed on 327 for 4.

Chasing that total was never going to be a realistic prospect for Pakistan, who lost wickets at regular intervals before being bowled out for 200 in the 45th over.

The captain Bismah Maroof made a brisk 64 from 65 balls, and Nahida Khan made 40 from 43. But England’s wickets were shared around, with Anya Shrubsole, Sarah Glenn, Sophie Ecclestone and Knight all claiming two apiece.

“I was really happy to reach three figures, from a selfish point of view, but it was just nice to take the team to a big total,” said Sciver.

“Fran batted so well when she came in and she really helped us accelerate towards 300 and beyond – it was a lot of fun batting with her and she played excellently.

“It was a shame Heather didn’t get to her landmark because she batted so well and it would have been a lovely way for her to celebrate getting to 100 caps.

“Pakistan have been quite testing, they were hard to get away at points today and they were solid with the bat so we’re happy to have gone 2-0 up and won the series.”