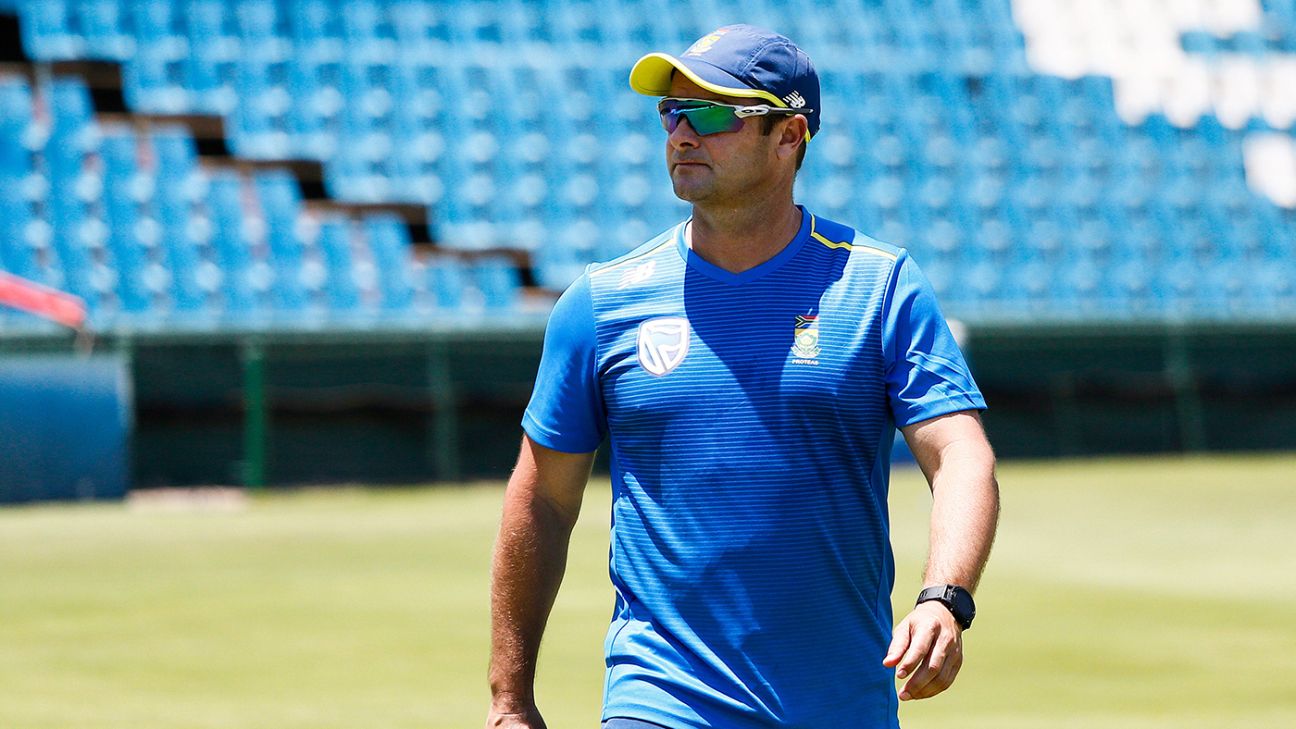 Some call it bullish, others call it bullying and Mark Boucher had been labelled both throughout his playing career. On the field, he was the man up for a fight. Off it, he was one of the toughest fines’ masters around: if he ordered it, you drank it. He was the ultimate boytjie. And then came that day in July 2012.

When Boucher’s career was ended by that freak eye injury, three Tests before he planned it would, he was forced to turn his focus inwards. Initially, it took him completely away from cricket and into nature conservation, and then it brought him back as a coach. At the Titans, Boucher was open to running his dressing room differently to the ones he played in. He let go of the schoolboy style ideas of hierarchy and embraced modern methods of man-management which are less dictatorial and more focused on individualism.

Under Boucher, the Titans won five trophies, produced Aiden Markram, Lungi Ngidi, Tabraiz Shamsi and Heinrich Klaasen for the national side, gave Dean Elgar and Theunis de Bruyn a franchise to find and re-find form and harnessed the talents of players such as Farhaan Behardien and Junior Dala to form a competitive unit. Just read those names and you can see differences of culture, background and experience. That Boucher was able to impact them all speaks to the biggest lesson he has learnt as a coach, and presents a softer and more considered side to a man we all thought we knew as uncompromisingly hard.

“My way is not always the right way,” Boucher said, at the South African team’s training camp in Pretoria. “There were times in my career where I used to go out there and be quite aggressive and try and impose myself on team-mates and this is what I have learnt about diversity within a set-up. Sometimes you won’t get the best out of the players if you are trying to get them to be like you. My biggest lesson is to let people be who they are and let them be natural. I played at my best when I was natural but my natural wasn’t the same as AB’s natural or JK’s natural. That’s a big lesson I have learnt with regards to leading individuals.”

“Sometimes you won’t get the best out of the players if you are trying to get them to be like you. My biggest lesson is to let people be who they are”

Mark Boucher on his coaching philosophy

Boucher’s observations about difference are essential at a time when the South African team risks appearing as if it is returning to the monotone days of the past. Although seven of the national side’s support staff were not part of the famed “clique”, as Herschelle Gibbs dubbed it, four most definitely were, and two of them are in the most influential positions. Graeme Smith is the acting director of cricket and Boucher is the head coach until 2023.

In addition, Jacques Kallis is the batting consultant for this summer and Paul Harris’ role as spin consultant is ad-hoc but, considering that Boucher was appointed above Enoch Nkwe, who is now his assistant, and taking into account the racial dynamics in South Africa, there are already accusations of a whitewash. While Gibbs has congratulated Boucher, he has also hinted that there is a concentration of power in certain peoples’ hands and so Boucher’s message of inclusivity and humility is even more important.

“If you look at every team, they’ve got different characters and I want those different characters to come out because I think they add value to team unity,” Boucher said. “The other thing is understanding that we don’t know everything and there’s certain players in there that have played a lot of Test cricket. Sometimes you’ve just got to be a man manager to them. Other individuals coming in maybe need a little bit more coaching and knowledge passed on to them to try and speed up the learning process.”

To apply that approach, not only does Boucher have to be perceptive enough to know which players need him more than others, but he also has to able to get his own personality out of the way. And that already seems to have happened.

“It’s important that you don’t have guys with egos,” Faf du Plessis, the captain, said. “That’s the most important thing when it comes to leadership groups, especially if there’s a few names thrown into the mix. For someone like Mark Boucher who has been coaching for the last three or four years with the Titans, seeing what it is like on the other side, because coaching and playing are two different roles, and you can see his development from a personality point of view.

“He also understands that it’s give-and-take. He will come in sometimes and I’ll pull away and vice versa and I think that only comes when you are mature enough to understand what a leadership group looks like and are secure in your own position. If you are insecure, then you are going to feel like you need to talk all the time because there is another big voice in the team but I don’t feel like that at all.”

Boucher still talks tough and is quick to remind anyone who asks that South Africa have recovered from tough times before, citing the 2-1 win in an ODI series against Australia after the Hansie Cronje scandal as his example. He needn’t go that far back, though. South Africa pulled themselves together after losing Boucher in the first warm-up match in 2012, which could have put their plans in disarray that summer, to beat England 2-0 and claim the ICC Test mace.

“Our role as coaches is about trying to create an environment for these guys to go out there and play their best cricket. It’s been hard work on the coaches, we have thrown a lot and my shoulder is a bit sore but we want to get the dirty work done. And the dirty work is sometimes a bit uncomfortable for the players in the nets but we spoke about being adaptable and open to change and to try and break the ceiling a bit and see how far we can push ourselves as individuals and as a team.”