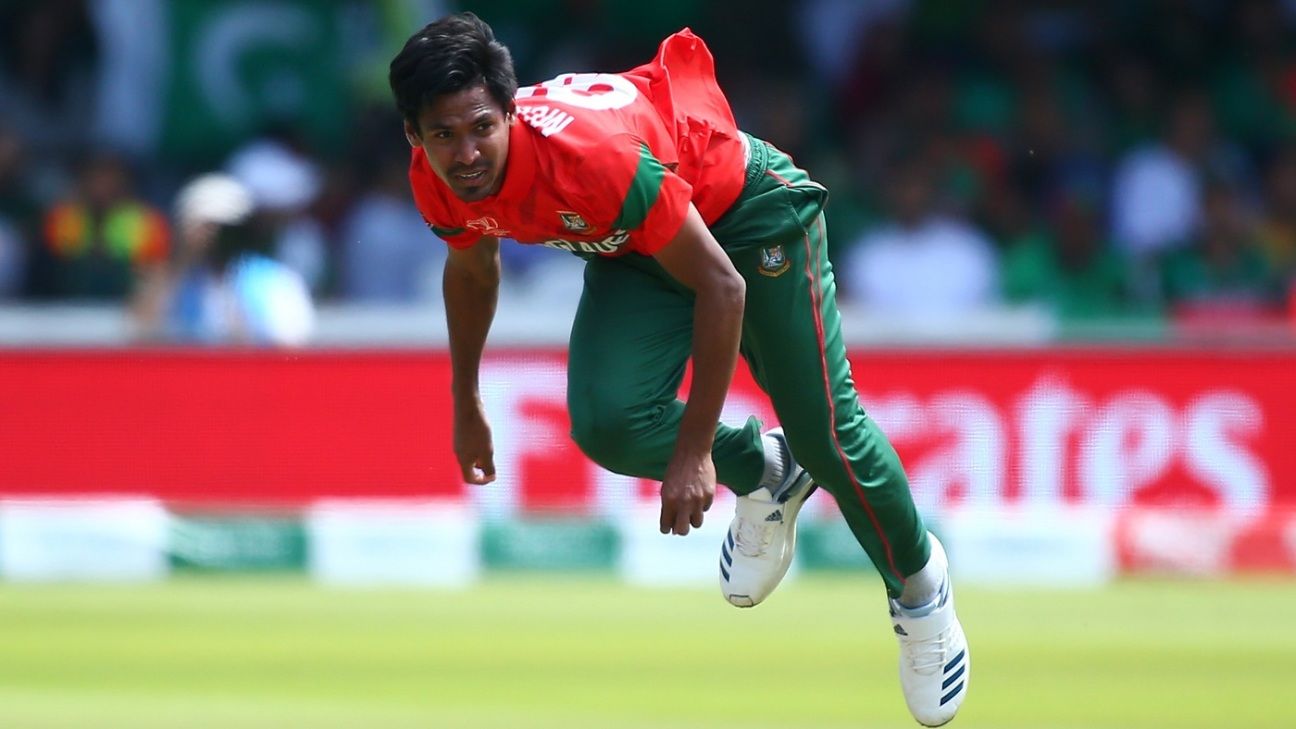 Despite finishing the World Cup with back-to-back five-wicket hauls, Mustafizur Rahman is focused on improving his accuracy to become a more consistent bowler at the death. He claimed 5 for 75 against Pakistan, to follow his 5 for 59 against India, and ended the tournament with 20 wickets at 24.20 but among bowlers who have taken at least 15 wickets, he conceded the highest runs per over.

After the Pakistan match, Mustafizur sat second to Mitchell Starc’s 24 wickets in eight matches, although Starc, Jofra Archer, Lockie Ferguson and Mark Wood would have more opportunities to get past him in the rest of the competition.

Significantly, he has not taken a single wicket in the first 30 overs of a game, having taken all of his wickets in the last 20 overs; 13 have come in the last five overs, in which he has taken a wicket in this World Cup every 7.50 balls. Mustafizur said that he wants to further work on his yorkers and sees playing more T20s as an opportunity to hone that skill.

“You always remember five-wicket hauls, especially if it comes during a World Cup,” Mustafizur said. “The one against India was definitely a special one, and while everyone said that I have been able to prove myself at the big stage, I think I could have done a lot better. I think I need to improve on my variations. I have a cutter but my yorker is 50/50. I want to improve the accuracy of my yorker, particularly for the death overs. I think playing more T20s will help accuracy while bowling in the last ten overs of a one-day game.”

Among the bowlers in the World Cup, Ferguson, Archer, Sheldon Cottrell, Lasith Malinga and Mohammad Amir are the top five wicket-takers in the first 20 overs, but Mustafizur is head and shoulders above the rest in the last 10 overs, in which he averages 12.73 for his 15 wickets, and has taken a wicket every 10 balls, although Starc’s nine wickets in the final ten have come at just 7.77

Since his debut in 2015 he has the second most wickets (48) in the last 10 overs of an ODI innings, second only to Jasprit Bumrah, and better than Rashid Khan. But it is a huge contrast in the first 20 overs where he averages 41.33, and it has developed into a situation where Bangladesh have lacked wickets in this phase throughout the World Cup, in which Mashrafe Mortaza, their main wicket-taker with the new ball in the last two decades, have also struggled for form.

Mustafizur said that he is comfortable bowling in the first 20 overs of the innings although he doesn’t see himself as an out-and-out pace bowler, but a slightly different variation of it. “I am ready to bowl at any stage in the match. I am a slightly different pace bowler. I average about 135kph, so I am not that quick. I am happy with my speed but I should be able to add a few more variations to my bowling.”