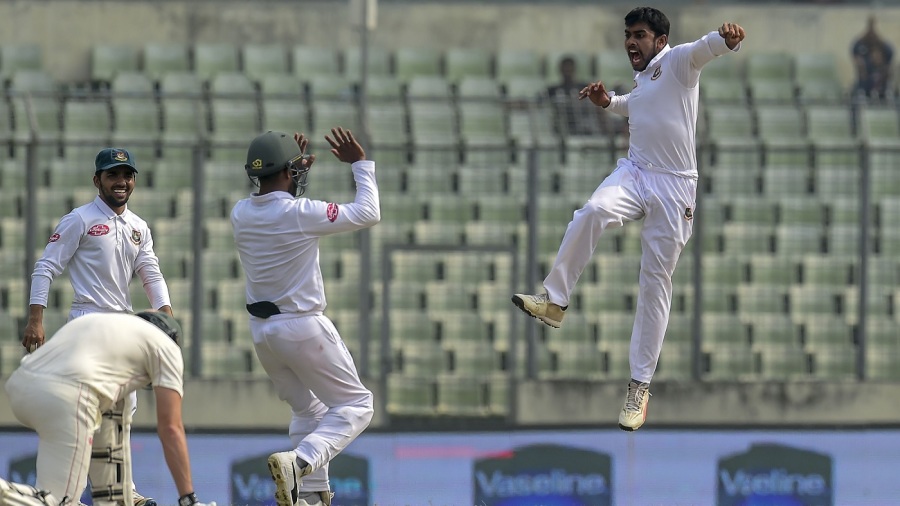 Mehidy Hasan Miraz bowled Bangladesh to a series-levelling win on the fifth day at the Shere Bangla National Stadium, taking 5 for 38, as Zimbabwe were bowled out for 224 half way through the second session. Brendan Taylor scored his second century of the game, but Zimbabwe’s batting crumbled around him and collapsed from 186 for 4 to 224 all out, with Mehidy running quickly through the tail.

Zimbabwe briefly resisted through a 66-run stand between Taylor and Peter Moor, but Mehidy broke through to have Moor well-caught off the inside edge at short leg. A suicidal single ended Regis Chakabva’s resistance early, and Mehidy took three wickets in his next four overs to wrap up the game with a session to spare.

Once Zimbabwe started to slide, their demise was swift, but they had entered the second session with an outside chance of saving the game. Taylor gritted his way through a nervy start early on, but once he got his feet moving, he collected runs with a mature authority. He read the length well against both seam and spin, driving, flicking and sweeping boundaries off Mehidy and Taijul Islam. He brought up a 95-ball fifty ten minutes before lunch, and at the other end, Moor offered him calm support.

While Taylor and Moor were together, Zimbabwe looked like they might weather the loss of Sean Williams and Sikandar Raza in the first session. Williams fell inside the first hour, set up by Mustafizur Rahman with a succession of deliveries that cut in to him, before the left-armer got one to land and leave him. Stuck in the crease and a little squared up, Williams was bowled past the outside edge in the ninth over of the morning.

With relentless pressure from a packed close-in field and some probing bowling, Raza never quite settled. He cracked Khaled Ahmed over square leg for a boundary, but then whipped across the line at a full one from Taijul, the ball taking the leading edge and popping back to the bowler, who took a sharp low catch.

Moor and Taylor then soaked up almost 24 overs before Mehidy found Moor’s inside edge, the ball popping up to present Imrul Kayes with a catch close in. The fight went from Zimbabwe when Taylor, closing in on his hundred, called Chakabva through for a non-existent single only for Mominul Haque to fire in a throw from short midwicket to catch him well short.

Two overs later, Mehidy landed one on a crack to get the ball to spit up at Tiripano’s glove, Liton Das holding an excellent catch at leg slip. Running out of partners, Taylor opened up to take nine runs from Taijul’s 37th over, bringing up his second hundred of the game in the process. Taylor also equalled Andy Flower’s record for the most international hundreds for Zimbabwe, taking his tally to 16, and became the first Zimbabwe batsman to score centuries in both innings twice, having done so before against Bangladesh in Harare in 2013.

He could not save Zimbabwe, however, and his team-mates did a shaky job of saving themselves on a pitch that offered a little extra turn and bounce, but never broke up completely. Bangladesh bowled with purpose all day and were rewarded for their patience as errors kept coming.

Mehidy drew a top-edge from Brandon Mavuta’s attempted sweep, with the ball safely pouched by Taijul at square leg, and then tempted Kyle Jarvis into an attempted big hit that was skied to Khaled, running back from mid-on. With Tendai Chatara unable to bat, that sealed the result and ended the series at 1-1.