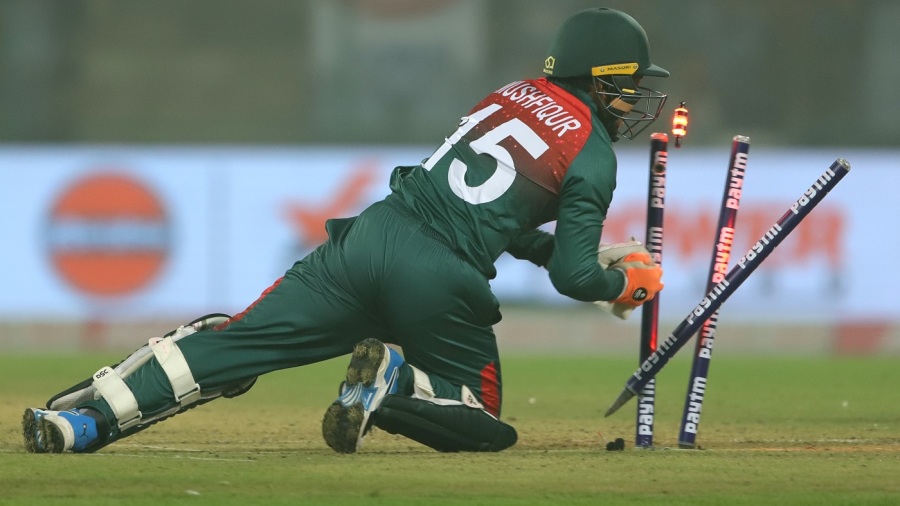 Mushfiqur Rahim‘s perfectly paced, unbeaten 60 took Bangladesh to a seven-wicket win over India, their first against these opponents in nine attempts. Mushfiqur’s late charge against Khaleel Ahmed completely changed the game in Delhi, so much so that the end was almost a formality. The 1-0 win would also be a massive boost to a cricket team that has been reeling after Shakib Al Hasan was banned for a year last week, not to mention the rift created by the players’ strike against the BCB.

Mushfiqur brings it back

Mushfiqur employed the pull shot, a scoop and two scythes through point to reduce Bangladesh’s chase from 20 off 10 balls to a mere four runs in the last over. Khaleel was the bowler bearing the brunt of Mushfiqur’s calculated hits, which came quite late, given how set he was at the crease up until that point. But in the end, it was a masterstroke to hold back his shots till that point, as Bangladesh savoured their big moment.

The debutant Shivam Dube was handed the ball in the last over, his medium pace a strange choice given the history between these two sides and last-over finishes. Dube was ineffective, as Mahmudullah ran hard to complete two runs off the second ball, before getting a wide and then hammering one over wide long-on for six. India could have done better to avoid the defeat, notably when Mushfiqur slog swept a ball in the 18th over to deep square leg and Krunal Pandya not only missed the catch but let it go for four too

When India batted first, Rohit Sharma was trapped lbw by a Shafiul Islam delivery that moved back in slightly in the first over. The home side’s rhythm was further dented when KL Rahul bunted legspinner Aminul Islam‘s half-tracker to Mahmudullah at short cover.

Shreyas Iyer pushed the run-rate but he too fell to Aminul, mistiming a lofted drive, having struck a four and two sixes in his 13-ball 22. At the other end, Shikhar Dhawan set his sights to bat through the innings, but Rishabh Pant’s poor call for a second run cost him, and India, dearly. Dhawan top-scored with 41, but it came off 42 balls.

Afif Hossain then leapt high to complete a fine return catch to dismiss Dube before Pant fell trying to clear long-on, having made 27 off 26 balls.

At 120 for 6 with ten balls left in the innings, India got the perfect boost as Krunal and Washington Sundar cobbled together 28 runs. Sundar struck two sixes while Pandya struck a four and a six off the last ball of the innings.

Mahmudullah’s choice to give Shafiul and Al-Amin Hossain those crucial overs ahead of Mustafizur Rahman may well be questioned, but perhaps he was wary of the number of left-handers in India’s line-up. Without a left-arm spinner in a T20I line-up for the first time, Mahmudullah used legspinner Aminul and offspinner Afif intelligently, the two youngsters combining to produce figures of 3 for 33 in six overs.

With Liton Das falling in the first over of the chase, the pressure was on Mohammad Naim, the debutant left-handed opener. He took a bit of time before flicking Deepak Chahar for a six over square leg in the fifth over, before clattering him for a cover-driven four a few balls later.

Soumya Sarkar then took on Sundar with a reverse slog for six before smashing Khaleel for a four through the covers in the seventh over. Naim fell in the eighth over when Yuzvendra Chahal had him caught at long-on, having made 26 off 28 balls.

With Naim’s wicket, Chahal hit his stride in his next over, when he had Mushfiqur in a tangle. After a perfect leg-break, Chahal rushed one on to the batsman’s pads, before nearly having him out leg-before. Mushfiqur managed to take a single, before Soumya too had a tough time getting Chahal away. The over ended with just one run conceded, as India began to look dominant.

From this point and until the start of the penultimate over, it looked like Mushfiqur had messed up his calculations trying to maneuver India’s bowling on a slow, turning pitch. But he trusted his plans and as a result Bangladesh walked off quietly from the Kotla with a win under their belt.