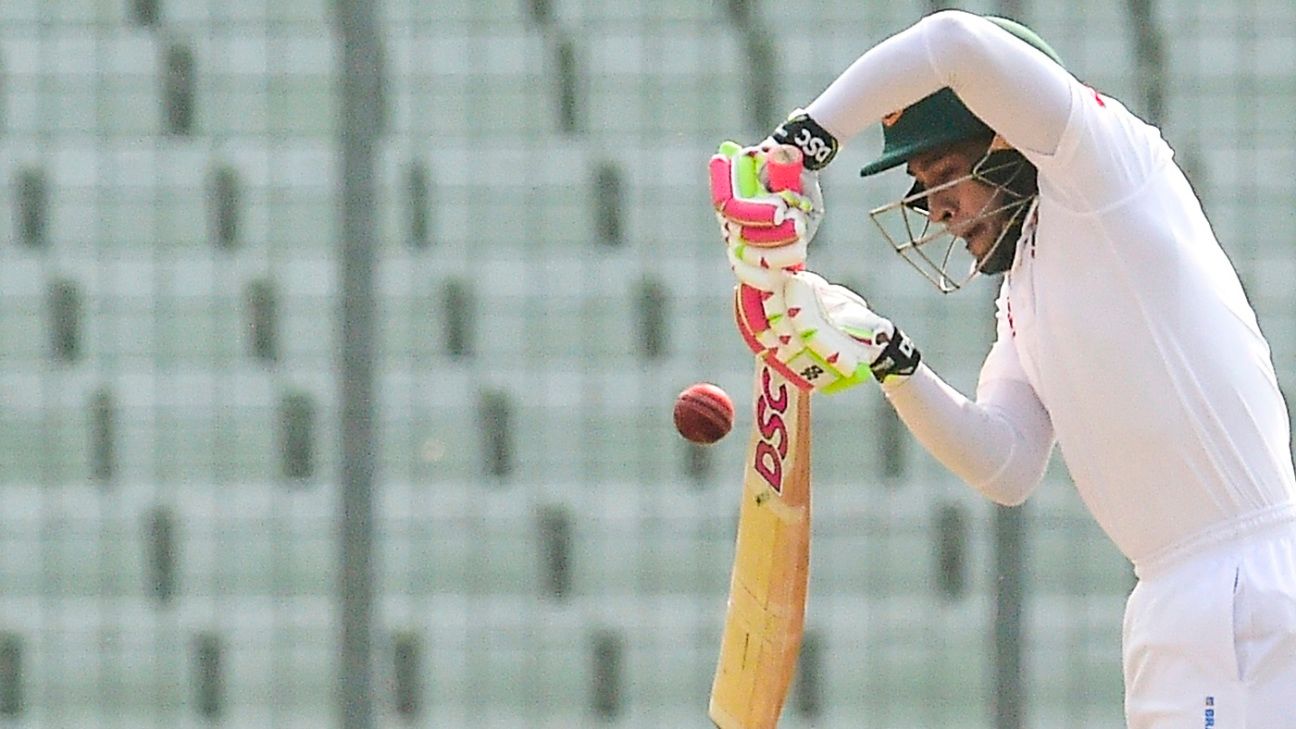 Mushfiqur Rahim remains “extremely doubtful” to return to the Bangladesh side for the second Test against New Zealand in Wellington despite taking part in a net session at the Basin Reserve. Mushfiqur is suffering from a wrist injury, as well as a flare-up of a rib problem, which kept him out of the Hamilton Test last week.

On Wednesday he batted in the nets for a considerable period although later the coach Steve Rhodes said that the soreness, in the area around his thumb and wrist, hadn’t gone away.

“Today was his first real hit,” Rhodes said. “We did some work with tennis, rubber and cricket ball. When he got to the cricket ball, there was still a bit of soreness in the ligament area. He is extremely doubtful for the second Test. The good news is that he is on course for the third Test. Let’s hope there’s no setback along the way.”

Rhodes said that Tamim Iqbal also had a light training at the Basin Reserve. “Tamim had a little light workout today. Just a little bit sore. He is in a good spot. He batted quite a few overs in the game and scored two hundred runs in the match. He is okay.”

Meanwhile, the BCB president Nazmul Hassan, said on Monday that Test captain Shakib Al Hasan can be a chance for the third Test only if his injured finger improves after being prescribed a week’s rest by doctors. “I heard that he underwent a test [on Sunday] and was prescribed a further seven days rest. I don’t think it’s absolutely necessary for him to play the third Test because the World Cup is coming up.

“If he has a problem then we want him to recover fully before returning to cricket. We don’t want to take any risks with him.”

Hassan added that Shakib must be cleared by the doctors ahead of the IPL which begins later this month. “If he is not fully okay then how will he play the IPL? It can’t be that he is only unfit for our national team but fit for the IPL. If he is fully okay and the doctors say so then he will be able to play in the IPL.”

The injuries and niggles bring to attention the make-up of the Bangladesh squad which is devoid of any batting back-up. Soumya Sarkar, who struck his maiden Test century in Hamilton, was called up to replace Shakib after the ODI series but, despite knowing of Mushfiqur’s condition ahead of the third ODI on February 20 neither the team management, nor the selectors, called for further back-up.

It left the squad with two extra spinners – Taijul Islam and Nayeem Hasan – pace bowler Mustafizur Rahman and the injured Mushfiqur, apart from the XI that played in Hamilton. Rhodes, as a result, can do nothing but to hope that the team remains healthy over the next 48 hours.

“It is one of those things sometimes. It is not an ideal world,” he said. “It was pleasing to see Soumya do so well. He was a back-up batsman, along with Liton. Fingers crossed we go through tomorrow which will be a very light session.”