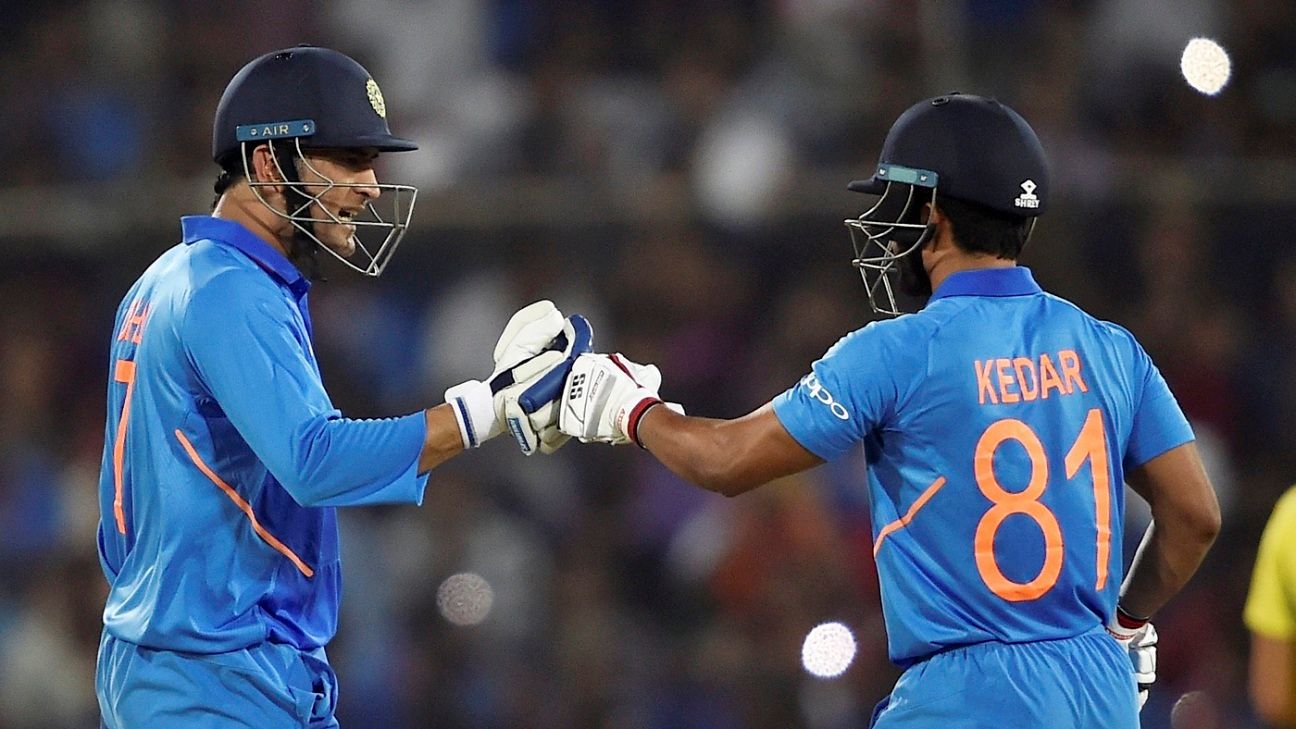 Less than two months after sealing a tight chase in Melbourne, master finisher MS Dhoni and his super apprentice Kedar Jadhav were at it again, this time in Hyderabad. A rather familiar script played out at Rajiv Gandhi Stadium, with Jadhav rattling off the boundaries and Dhoni complementing him with a well-modulated half-century of his own.

While Jadhav had to adjust to the bounce at the MCG, in his first game on Australian soil, here he had to deal with Adam Zampa‘s legbreaks and wrong’uns on a fairly two-paced track. Zampa doesn’t give the ball a big rip, like Rashid Khan or Kuldeep Yadav do, but he has developed exemplary control over his lines, lengths, and variations.

He reeled in both Virat Kohli and Ambati Rayudu to help Australia pin India down to 99 for four in a chase of 237. Dhoni has been a notoriously slow starter of late, particularly against spin, and the trend continued against Zampa. The legspinner kept cramping Dhoni for room and limited him to four runs in ten balls.

ALSO READ: How can India best use Dhoni in the World Cup?

Zampa also troubled Jadhav briefly before the batsman manufactured swinging room and crunched him inside-out for a brace of fours. Even though the boundaries weren’t coming as regularly as India would have liked, Jadhav and Dhoni kept India ticking with hard-run singles and twos. It left both Dhoni, who needed some treatment on his right leg at the start of the 44th over, and Jadhav exhausted.

Moments after walking in for the post-match press conference, Jadhav asked for a bottle of water, took a breather, and gushed at how Dhoni willed him to polish off another tricky chase.

“I keep it stump to stump. You will find it difficult, my ball doesn’t bounce that much. It comes from two or three different angles”

“Every time I bat with him [Dhoni] and I spend time with him, I learn a lot,” Jadhav said. “I can’t put it out in words. Every time I see Mahi bhai, I feel very confident. That sort of aura is like, that you see him and feel that ‘I will deliver today’. He has the knack of getting the best out of every player and that’s what everybody loves about him.”

India’s plan, Jadhav explained, was to see off Zampa and go after the other bowlers. While Jadhav ramped Pat Cummins over the keeper’s head and swatted Marcus Stoinis to the square-leg boundary, Dhoni brought the roof down with a trademark bottom-handed shovel over the wide long-on boundary off Nathan Coulter-Nile.

“The thing is, me and Mahi bhai have plans in our heads,” Jadhav said. “We bat according to that plan. And the plan was to not give him [Zampa] a wicket because he was looking like one bowler who can take wickets. We need to give respect to him if he is bowling well. Obviously, he bowled well, bowled in the right areas with good speeds and good variations, so we had to give that respect.

“Out of both of us, one has to take the risk [against other bowlers]. I have batted throughout my career at No. 4, so I’m more open to play all the shots. Growing up, I’ve always built my batting playing shots. When playing shots, trying some innovative shots, I feel I have a good chance of converting those innovative shots. Mahi bhai sticks to his natural game – hitting down the ground. As long as he’s there, the other teams always feels the pressure.”

India’s captain Virat Kohli was particularly impressed with how Dhoni and Jadhav marshalled the chase from a precarious position at four down for 99.

“It was a difficult sort of a game,” Kohli said at the post-match presentation. “We did a good job with the ball. The wicket didn’t offer as much as it did under the lights, which was surprising. You have experience with MS and flair with Kedar, who is also experienced now. That partnership was outstanding and it was more or less a complete performance. That set the platform.

“At 99 for three (India were four down), I was speaking to Ravi Shastri bhai, and I said ‘this is good’. These guys have to do it and they have to get us across the line. The way Kedar and MS took responsibility, it was great to see.” Jadhav had also taken responsibility with the ball, breaking a solid 87-run partnership between Usman Khawaja and Marcus Stoinis. Believe it or not, Jadhav has dismissed Kane Williamson twice with his low-arm donkey drops. He has turned into regular collector of wickets, prompting Rohit Sharma to call him a “proper spinner” during the recent New Zealand tour. Does Jadhav see himself as someone who can bowl ten overs in every ODI?

“I have never thought of bowling ten overs in a game as of now,” he said. “If the situation demands and the team requires me to, I can definitely do. But doing that consistently, it will take mental adjustment and physically also I need to adjust. I’ve not grown up bowling a lot of overs, so my body is also not adjusting immediately. I don’t think I’m a bowler, I do my job, and I know my limitations.

“I guess I’m just lucky to get wickets. I keep it stump to stump. You will find it difficult, my ball doesn’t bounce that much. It comes from two or three different angles.”

An unbeaten 87-ball 81 with the bat. Making a crucial breakthrough with the ball. Pulling off the chase with Dhoni. Drawing rapturous cheers from the 36,801 spectators. It was the Jadhav show in Hyderabad.