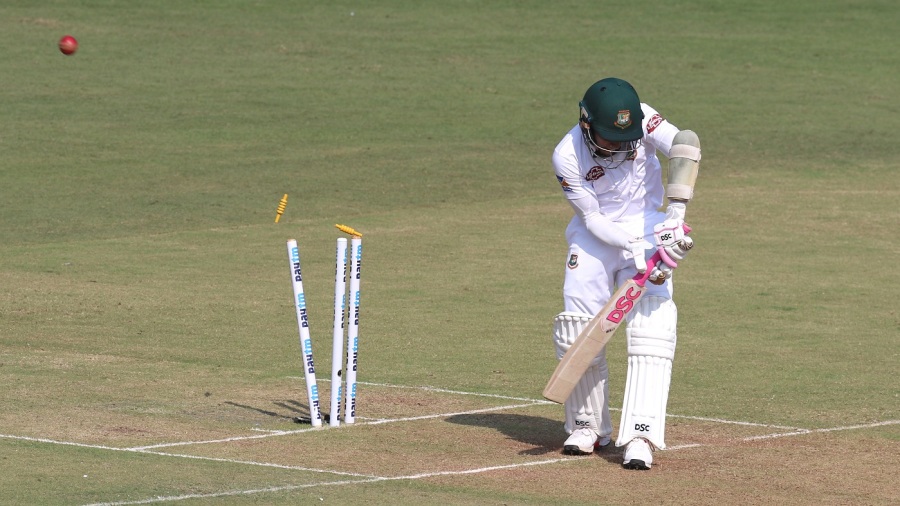 It’s weird. For someone who has like the most amazing seam position, Mohammed Shami with the old ball looks way, way, waaaay better than Mohammed Shami with the new ball. And if you’re not convinced, see what he did to Mushfiqur Rahim in Indore. It was pure poetry and that’s without getting into how it took out Bangladesh’s top-scorer and sent them crashing to 150 all out.

The game had just ticked past 50 overs, somewhere near the time reverse swing comes into play. India had already dismissed half the opposition and Bangladesh were just trying to make the best of a bad situation. All hopes of doing that vanished when Shami came for his fourth spell. For some reason he decided to go wide of the crease. The ball kissed the good length but it was so far away from the off stump that Mushfiqur was preparing to leave it altogether. Then it swung in. Sharply. Quickly. Violently. The batsman had no chance. Especially because, in that same over, Shami was moving the ball conventionally away from the right-hander. How can you prepare for that? #AskingForAFriend..

India finished the day only 64 runs behind, with Rohit Sharma out for 6 but Mayank Agarwal and Cheteshwar Pujara fairly dominant.

No plan survives contact with the enemy. Mushfiqur’s was swing. For the rest of his team-mates, it was, well, mostly themselves. Bangladesh had won a good toss. Their captain Mominul Haque had made a brave call to bat first. The pitch had enough grass cover to make India pick three seamers, all of whom have improved so much since the start of their careers that Virat Kohli now commands one of the best bowling attacks in history. Still, the visitors backed themselves to put runs on the board because that’s what you do in the subcontinent. And in short phases of their innings, they showed they were capable of it.

Mominul was the best of them, walking in with the score 12 for 1, seeing it become 12 for 2 and reviving it until it was a much healthier 99 for 3. He didn’t really do much to pull off that recovery. It was just careful Test-match batting, playing close to the body, leaving as much as he could outside off stump and most importantly using soft hands as much as possible. His openers failed to do that.

Imrul Kayes was caught at third slip off Umesh Yadav for 6, Shadman Islam was sucked in by a full and wide delivery from Ishant Sharma and it was hard not to think about Tamim Iqbal and Shakib Al Hasan. One of them could have helped Bangladesh withstand the early pressure from India, the other might have counterattacked and the contest would have been even.

It still was for a little period in the lead up to and then after the lunch break. Mominul had steadied the ship, scoring 37 off 80 balls, all of his six boundaries coming behind the wicket as he lured India into bowling at his body and to his strengths. That is why it was so bizarre when he left a straight ball and got bowled.

R Ashwin was responsible for that little misjudgment; the India offspinner had snuck onto the Bangladesh vessel, all whistling and innocent-like, and gently elbowed their captain overboard. It was his 250th wicket in 42 Tests at home. He had been lovely to watch on a pitch that offered him nothing. His control in the air – varying the flight of the ball – his tricks – getting one to spin and the other to hold its line – and that sixth sense of when to bowl what were all on show. On a better day, when Ajinkya Rahane doesn’t drop three catches off his bowling, Ashwin would have got more than 2 for 43.

It was the 19th time in the last two years that India had bowled out an opposition for a sub-200 total. Their bowlers are relentless. They stay patient. They have a variety of skills. They can out-think batsmen. They’re a threat no matter the condition of the ball. Heck, they take wickets even when they’re fielding down at deep fine leg as Ravindra Jadeja proved with a pin-point throw that led to Taijul Islam’s run-out. It was a day for the bowling coach B Arun to sit back and revel in a job well done.